An optical isolator, or optical diode, is an optical component which allows the transmission of light in only one direction. It is typically used to prevent unwanted feedback into an optical oscillator, such as a laser cavity. The operation of the device depends on the Faraday effect (which in turn is produced by magneto-optic effect), which is used in the main component, the Faraday rotator.

Figure 1: The optical circuit symbol for an isolator

{{#invoke:main|main}} The main component of the optical isolator is the Faraday rotator. The magnetic field,

is the Verdet constant of the material (amorphous or crystalline; solid, liquid, or gaseous) of which the rotator is made, and

is the length of the rotator. This is shown in Figure 2. Specifically for an optical isolator, the values are chosen to give a rotation of 45°. 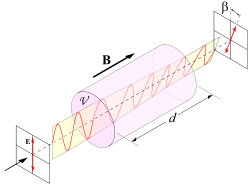 Figure 2: Faraday rotator, with a polarizer and an analyser

Light traveling in the forward direction becomes polarized vertically by the input polarizer. The Faraday rotator will rotate the polarization by 45°. The analyser then enables the light to be transmitted through the isolator.

Light traveling in the backward direction becomes polarized at 45° by the analyser. The Faraday rotator will again rotate the polarization by 45°. This means the light is polarized horizontally (the rotation is sensitive to direction of propagation). Since the polarizer is vertically aligned, the light will be extinguished.

Figure 2 shows a Faraday rotator with an input polarizer, and an output analyser. For a polarization dependent isolator, the angle between the polarizer and the analyser,

Light traveling in the forward direction is split by the input birefringent wedge into its vertical (0°) and horizontal (90°) components, called the ordinary ray (o-ray) and the extraordinary ray (e-ray) respectively. The Faraday rotator rotates both the o-ray and e-ray by 45°. This means the o-ray is now at 45°, and the e-ray is at −45°. The output birefringent wedge then recombines the two components.

{{#invoke:main|main}} The most important optical element in an isolator is the Faraday rotator. The characteristics that one looks for in a Faraday rotator optic include a high Verdet constant, low absorption coefficient, low non-linear refractive index and high damage threshold. Also, to prevent self-focusing and other thermal related effects, the optic should be as short as possible. The two most commonly used materials for the 700–1100 nm range are terbium doped borosilicate glass and terbium gallium garnet crystal (TGG). For long distance fibre communication, typically at 1310 nm or 1550 nm, yttrium iron garnet crystals are used (YIG). Commercial YIG based Faraday isolators reach isolations higher than 30 dB.

Optical isolators are different from 1/4 wave plate based isolators because the Faraday rotator provides non-reciprocal rotation while maintaining linear polarization. That is, the polarization rotation due to the Faraday rotator is always in the same relative direction. So in the forward direction, the rotation is positive 45°. In the reverse direction, the rotation is −45°. This is due to the change in the relative magnetic field direction, positive one way, negative the other. This then adds to a total of 90° when the light travels in the forward direction and then the negative direction. This allows the higher isolation to be achieved.

It might seem at first glance that a device that allows light to flow in only one direction would violate Kirchhoff's law and the second law of thermodynamics, by allowing light energy to flow from a cold object to a hot object and blocking it in the other direction, but the violation is avoided because the isolator must absorb (not reflect) the light from the hot object and will eventually reradiate it to the cold one. Attempts to re-route the photons back to their source unavoidably involve creating a route by which other photons can travel from the hot body to the cold one, avoiding the paradox.[2][3]