{{ safesubst:#invoke:Unsubst||$N=Merge from |date=__DATE__ |$B= Template:MboxTemplate:DMCTemplate:Merge partner }} Optical rotation (optical activity) is the turning of the plane of linearly polarized light about the direction of motion as the light travels through certain materials. It occurs in solutions of chiral molecules such as sucrose (sugar), solids with rotated crystal planes such as quartz, and spin-polarized gases of atoms or molecules. It is used in the sugar industry to measure syrup concentration, in optics to manipulate polarization, in chemistry to characterize substances in solution, and in optical mineralogy to help identify certain minerals in thin sections. It is being developed as a method to measure blood sugar concentration in diabetic people. 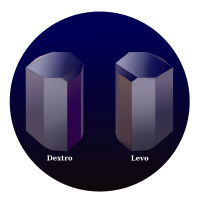 The rotation of the orientation of linearly polarized light was first observed in 1811 in quartz by French physicist François Jean Dominique Arago. In 1822, the English astronomer Sir John F.W. Herschel discovered that different individual quartz crystals, whose crystalline structures are mirror images of each other (see illustration), rotate linear polarization by equal amounts but in opposite directions. Jean Baptiste Biot also observed the rotation of the axis of polarization in certain liquids and gasesTemplate:Cn of organic substances such as turpentine. Simple polarimeters have been used since this time to measure the concentrations of simple sugars, such as glucose, in solution. In fact one name for D-glucose (the biological isomer), is dextrose, referring to the fact that it causes linearly polarized light to rotate to the right or dexter side. In a similar manner, levulose, more commonly known as fructose, causes the plane of polarization to rotate to the left. Fructose is even more strongly levorotatory than glucose is dextrorotatory. Invert sugar syrup, commercially formed by the hydrolysis of sucrose syrup to a mixture of the component simple sugars, fructose, and glucose, gets its name from the fact that the conversion causes the direction of rotation to "invert" from right to left.

In 1849, Louis Pasteur resolved a problem concerning the nature of tartaric acid. A solution of this compound derived from living things (to be specific, wine lees) rotates the plane of polarization of light passing through it, but tartaric acid derived by chemical synthesis has no such effect, even though its reactions are identical and its elemental composition is the same. Pasteur noticed that the crystals come in two asymmetric forms that are mirror images of one another. Sorting the crystals by hand gave two forms of the compound: Solutions of one form rotate polarized light clockwise, while the other form rotate light counterclockwise. An equal mix of the two has no polarizing effect on light. Pasteur deduced that the molecule in question is asymmetric and could exist in two different forms that resemble one another as would left- and right-hand gloves, and that the organic form of the compound consists of purely the one type.

In 1874, Jacobus Henricus van 't Hoff and Joseph Achille Le Bel independently proposed that this phenomenon of optical activity in carbon compounds could be explained by assuming that the 4 saturated chemical bonds between carbon atoms and their neighbors are directed towards the corners of a regular tetrahedron. If the 4 neighbors are all different, then there are two possible orderings of the neighbors around the tetrahedron, which will be mirror images of each other. This led to a better understanding of the three-dimensional nature of molecules.

Optical activity is a type of birefringence. Any linear polarization of light can be written as an equal combination of right-hand (RHC) and left-hand circularly (LHC) polarized light:

is the electric field of the light. The relative phase between the two circular polarizations,

, sets the direction of the linear polarization to

. In an optically active material, the two circular polarizations experience different refractive indices. The difference in the indices quantifies the strength of the optical activity,

This difference is a characteristic of the material (for substances in solution, it is given as the specific rotation). After traveling through length

of material, the two polarizations pick up a relative phase of

is the wavelength of the light (in vacuum). As a consequence, the final polarization is rotated to angle

In general, the refractive index depends on the wavelength (see dispersion). The variation in rotation with the wavelength of the light is called optical rotatory dispersion (ORD). ORD spectra and circular dichroism spectra are related through the Kramers–Kronig relations. Complete knowledge of one spectrum allows the calculation of the other.

In summary, the degree of rotation depends on the color of the light (the yellow sodium D line near 589 nm wavelength is commonly used for measurements), the path length

and the properties of the material (e.g.,

or specific rotation and concentration).

Molecular optical activity and the rotation of plane polarized light

{{ safesubst:#invoke:Unsubst||$N=Unreferenced section |date=__DATE__ |$B= {{ safesubst:#invoke:Unsubst||$N=Unreferenced |date=__DATE__ |$B= {{#invoke:Message box|ambox}} }} }} The ability to rotate plane polarized light is a property possessed by every single (individual) molecule. That is to say, each individual molecule of any given compound is optically active.

When a beam of plane polarized light encounters an individual molecule, (for example, in a liquid sample of a non-chiral compound), in almost all cases its plane is rotated by a certain amount due to its interaction with the charged particles of the molecule. For a given compound, the extent and direction of this rotation depends on the orientation of the molecule in relation to the beam.

Because of the very large number and random distribution of the molecules that comprise even the smallest sample, each of these individual rotations is, in effect, canceled out due to the presence of an identical molecule that is orientated as the exact geometric mirror image of another within the sample. The combined result of all of these cancellations is no net rotation of the plane polarized light and thus optical inactivity.

Optical inactivity is therefore not a property of individual molecules but a bulk property resulting from the random distribution of molecules within a sample, which can serve as geometric mirror images of each other.

For compounds that exhibit chirality (enantiomers) this same cancellation effect is responsible for the optical inactivity of a racemic mixture. However, for a sample of a pure enantiomer or one that is enantiomerically enriched, this phenomena of exact cancellation of individual rotations can not occur and therefore the result is optical activity.

For a pure substance in solution, if the color and path length are fixed and the specific rotation is known, the observed rotation can be used to calculate the concentration. This usage makes a polarimeter a tool of great importance to those trading in or using sugar syrups in bulk.

In the presence of an applied magnetic field, it is possible for samples of all compounds to exhibit optical activity. A magnetic field aligned in the direction of light propagating through a material will cause the rotation of the plane of linear polarization. This Faraday effect is one of the first discoveries of the relationship between light and electromagnetic effects.

Optical activity or rotation should not be confused with circularly polarized light. Circularly polarized light is often presented as a linear polarization rotating as the light propagates. However, in this picture, the polarization completely rotates in a length equal to the wavelength (roughly one micrometer for visible light), and it can happen in vacuum. In contrast, optical activity occurs only in a material, and a complete rotation occurs in a length of millimeters to meters, depending on the material.