Not to be confused with s-p mixing in Molecular Orbital theory. See Molecular orbital diagram.

In chemistry, hybridisation (or hybridization) is the concept of mixing atomic orbitals into new hybrid orbitals (with different energies, shapes, etc., than the component atomic orbitals) suitable for the pairing of electrons to form chemical bonds in valence bond theory. Hybrid orbitals are very useful in the explanation of molecular geometry and atomic bonding properties. Although sometimes taught together with the valence shell electron-pair repulsion (VSEPR) theory, valence bond and hybridisation are in fact not related to the VSEPR model.[1]

Chemist Linus Pauling first developed the hybridisation theory in 1931 in order to explain the structure of simple molecules such as methane (CH4) using atomic orbitals.[2] Pauling pointed out that a carbon atom forms four bonds by using one s and three p orbitals, so that "it might be inferred" that a carbon atom would form three bonds at right angles (using p orbitals) and a fourth weaker bond using the s orbital in some arbitrary direction. In reality however, methane has four bonds of equivalent strength separated by the tetrahedral bond angle of 109.5°. Pauling explained this by supposing that in the presence of four hydrogen atoms, the s and p orbitals form four equivalent combinations or hybrid orbitals, each denoted by sp3 to indicate its composition, which are directed along the four C-H bonds.[3] This concept was developed for such simple chemical systems, but the approach was later applied more widely, and today it is considered an effective heuristic for rationalising the structures of organic compounds.

Orbitals are a model representation of the behaviour of electrons within molecules. In the case of simple hybridisation, this approximation is based on atomic orbitals, similar to those obtained for the hydrogen atom, the only neutral atom for which the Schrödinger equation can be solved exactly. In heavier atoms, such as carbon, nitrogen, and oxygen, the atomic orbitals used are the 2s and 2p orbitals, similar to excited state orbitals for hydrogen. Hybrid orbitals are assumed to be mixtures of these atomic orbitals, superimposed on each other in various proportions. It provides a quantum mechanical insight to Lewis structures. Hybridisation theory finds its use mainly in organic chemistry.

This terminology describes the weight of the respective components of a hybrid orbital. For example, in methane, the C hybrid orbital which forms each carbon–hydrogen bond consists of 25% s character and 75% p character and is thus described as sp3 (read as s-p-three) hybridised. Quantum mechanics describes this hybrid as an sp3 wavefunction of the form N(s + Template:Sqrtpσ), where N is a normalization constant (here 1/2) and pσ is a p orbital directed along the C-H axis to form a sigma bond. The ratio of coefficients (denoted λ in general) is [[square root of 3|Template:Sqrt]] in this example. Since the electron density associated with an orbital is proportional to the square of the wavefunction, the ratio of p-character to s-character is λ2 = 3. The p character or the weight of the p component is N2λ2 = 3/4.

For atoms forming equivalent hybrids with no lone pairs, there is a correspondence to the number and type of orbitals used. Thus sp3 hybrids in methane are formed from one s and three p orbitals. However, in other cases, there may be no such correspondence. For example, the two bond-forming hybrid orbitals of oxygen in water can be described as sp4, which means that they have 20% s character and 80% p character, but does not imply that they are formed from one s and four p orbitals. As a result, the amount of p-character is not restricted to integer values; i.e., hybridisations like sp2.5 are also readily described. For more information see variable hybridization.

An analogous notation is used to describe sdx hybrids. For example, the permanganate ion (MnO4–) has sd3 hybridisation with orbitals that are 25% s and 75% d.

Hybridisation describes the bonding atoms from an atom's point of view. That is, for a tetrahedrally coordinated carbon (e.g., methane CH4), the carbon should have 4 orbitals with the correct symmetry to bond to the 4 hydrogen atoms.

The carbon atom can utilize its two singly occupied p-type orbitals (the designations px py or pz are meaningless at this point, as they do not fill in any particular order), to form two covalent bonds with two hydrogen atoms, yielding the "free radical" methylene CH2, the simplest of the carbenes. The carbon atom can also bond to four hydrogen atoms by an excitation of an electron from the doubly occupied 2s orbital to the empty 2p orbital, so that there are four singly occupied orbitals.

As the energy released by formation of two additional bonds more than compensates for the excitation energy required, the formation of four C-H bonds is energetically favoured.

Quantum mechanically, the lowest energy is obtained if the four bonds are equivalent which requires that they be formed from equivalent orbitals on the carbon. A set of four equivalent orbitals can be obtained which are linear combinations of the valence-shell (core orbitals are almost never involved in bonding) s and p wave functions[4] which are the four sp3 hybrids. 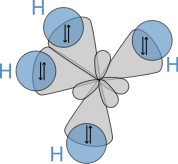 Other carbon based compounds and other molecules may be explained in a similar way as methane. For example, ethene (C2H4) has a double bond between the carbons.

For this molecule, carbon will sp2 hybridise, because one π (pi) bond is required for the double bond between the carbons, and only three σ bonds are formed per carbon atom. In sp2 hybridisation the 2s orbital is mixed with only two of the three available 2p orbitals:

forming a total of three sp2 orbitals with one p orbital remaining. In ethylene (ethene) the two carbon atoms form a σ bond by overlapping two sp2 orbitals and each carbon atom forms two covalent bonds with hydrogen by s–sp2 overlap all with 120° angles. The π bond between the carbon atoms perpendicular to the molecular plane is formed by 2p–2p overlap. The hydrogen–carbon bonds are all of equal strength and length, which agrees with experimental data.

The chemical bonding in compounds such as alkynes with triple bonds is explained by sp hybridisation.

In this model, the 2s orbital mixes with only one of the three p orbitals resulting in two sp orbitals and two remaining unchanged p orbitals. The chemical bonding in acetylene (ethyne) (C2H2) consists of sp–sp overlap between the two carbon atoms forming a σ bond and two additional π bonds formed by p–p overlap. Each carbon also bonds to hydrogen in a σ s–sp overlap at 180° angles.

Hybridisation helps to explain molecule shape since the angles between bonds are (approximately) equal to the angles between hybrid orbitals, as explained above for the tetrahedral geometry of methane. As another example, the three sp2 hybrid orbitals are at angles of 120° to each other, so this hybridisation favours trigonal planar molecular geometry with bond angles of 120°. Other examples are given in the table below.

For main group compounds with lone electron pairs, the s orbital lone pair can be hybridised to a certain extent with the bond pairs.[8] This is analogous to s-p mixing in molecular orbital theory, and maximizes energetic stability according to the Walsh diagram for the molecule.

In general chemistry courses and mainstream textbooks, hybridisation is often presented for main group AX5 and above, as well as for transition metal complexes, using the hybridisation scheme first proposed by Pauling.

As shown by computational chemistry, hypervalent molecules can only be stable given strongly polar (and weakened) bonds with electronegative ligands such as fluorine or oxygen to reduce the valence electron occupancy of the central atom to a maximum of 8[9] (or 12 for transition metals). This requires an explanation that invokes sigma resonance in addition to hybridisation, which implies that each resonance structure has its own hybridisation scheme. As a guideline, all resonance structures have to obey the octet rule for main group compounds and the dodectet (12) rule for transition metal complexes.

The simplistic picture of hybridisation taught in conjunction with VSEPR theory does not agree with high-level theoretical calculations[8] despite its widespread usage in many textbooks. For example, following the guidelines of VSEPR, the hybridization of the oxygen in water is described with two equivalent lone electron-pairs.[10] However, molecular orbital calculations give orbitals that reflect the C2v symmetry of the molecule.[11] One of the two lone pairs is in a pure p-type orbital, with its electron density perpendicular to the H–O–H framework.[12] The other lone pair is in an approximately sp0.8 orbital that is in the same plane as the H–O–H bonding.[12] Photoelectron spectra confirm the presence of two different energies for the nonbonded electrons.[13]

In 1990, Magnusson published a seminal work definitively excluding the role of d-orbital hybridization in bonding in hypervalent compounds of second-row elements. This had long been a point of contention and confusion in describing these molecules using molecular orbital theory. Part of the confusion here originates from the fact that one must include d-functions in the basis sets used to describe these compounds (or else unreasonably high energies and distorted geometries result), and the contribution of the d-function to the molecular wavefunction is large. These facts were historically interpreted to mean that d-orbitals must be involved in bonding. However, Magnusson concludes in his work that d-orbital involvement is not implicated in hypervalency.[14]

Similarly, p orbitals have long been thought to be utilized by transition metal centers in bonding with ligands, hence the 18-electron description; however, recent molecular orbital calculations have found that such p orbital participation in bonding is insignificant,[15][16] even though the contribution of the p-function to the molecular wavefunction is calculated to be somewhat larger than that of the d-function in main group compounds.

Hybridisation theory is an integral part of organic chemistry and in general discussed together with molecular orbital theory in advanced organic chemistry textbooks although for different reasons. One textbook notes that for drawing reaction mechanisms sometimes a classical bonding picture is needed with two atoms sharing two electrons.[17] It also comments that predicting bond angles in methane with MO theory is not straightforward. Another textbook treats hybridisation theory when explaining bonding in alkenes[18] and a third[19] uses MO theory to explain bonding in hydrogen but hybridisation theory for methane.

Bonding orbitals formed from hybrid atomic orbitals may be considered as localized molecular orbitals, which can be formed from the delocalized orbitals of molecular orbital theory by an appropriate mathematical transformation. For molecules with a closed electron shell in the ground state, this transformation of the orbitals leaves the total many-electron wave function unchanged. The hybrid orbital description of the ground state is therefore equivalent to the delocalized orbital description for explaining the ground state total energy and electron density, as well as the molecular geometry which corresponds to the minimum value of the total energy.

There is no such equivalence, however, for ionized or excited states with open electron shells. Hybrid orbitals cannot therefore be used to interpret photoelectron spectra, which measure the energies of ionized states, identified with delocalized orbital energies using Koopmans' theorem. Nor can they be used to interpret UV-visible spectra which correspond to electronic transitions between delocalized orbitals. From a pedagogical perspective, the hybridisation approach tends to over-emphasize localisation of bonding electrons and does not effectively embrace molecular symmetry as does MO theory.