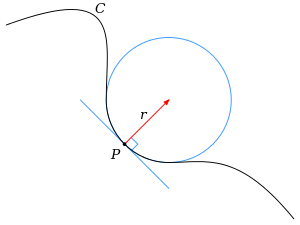 In differential geometry of curves, the osculating circle of a sufficiently smooth plane curve at a given point p on the curve has been traditionally defined as the circle passing through p and a pair of additional points on the curve infinitesimally close to p. Its center lies on the inner normal line, and its curvature is the same as that of the given curve at that point. This circle, which is the one among all tangent circles at the given point that approaches the curve most tightly, was named circulus osculans (Latin for "kissing circle") by Leibniz.

There being given, in any places, the velocity with which a body describes a given figure, by means of forces directed to some common centre: to find that centre.

Imagine a car moving along a curved road on a vast flat plane. Suddenly, at one point along the road, the steering wheel locks in its present position. Thereafter, the car moves in a circle that "kisses" the road at the point of locking. The curvature of the circle is equal to that of the road at that point. That circle is the osculating circle of the road curve at that point.

Let γ(s) be a regular parametric plane curve, where s is the arc length, or natural parameter. This determines the unit tangent vector T, the unit normal vector N, the signed curvature k(s) and the radius of curvature at each point:

Suppose that P is a point on γ where k ≠ 0. The corresponding center of curvature is the point Q at distance R along N, in the same direction if k is positive and in the opposite direction if k is negative. The circle with center at Q and with radius R is called the osculating circle to the curve γ at the point P.

where regular means that

. Then the formulas for the signed curvature k(t), the normal unit vector N(t), the radius of curvature R(t), and the center Q(t) of the osculating circle are

For a curve C given by a sufficiently smooth parametric equations (twice continuously differentiable), the osculating circle may be obtained by a limiting procedure: it is the limit of the circles passing through three distinct points on C as these points approach P.[1] This is entirely analogous to the construction of the tangent to a curve as a limit of the secant lines through pairs of distinct points on C approaching P.

The osculating circle S to a plane curve C at a regular point P can be characterized by the following properties:

This is usually expressed as "the curve and its osculating circle have the third or higher order contact" at P. Loosely speaking, the vector functions representing C and S agree together with their first and second derivatives at P.

The curve C may be obtained as the envelope of the one-parameter family of its osculating circles. Their centers, i.e. the centers of curvature, form another curve, called the evolute of C. Vertices of C correspond to singular points on its evolute.

The osculating circle of the parabola at its vertex has radius 0.5 and fourth order contact.

the radius of curvature is

A Lissajous curve with ratio of frequencies (3:2) can be parametrized as follows

It has signed curvature k(t), normal unit vector N(t) and radius of curvature R(t) given by

See the figure for an animation. There the "acceleration vector" is the second derivative

with respect to the arc length

For some historical notes on the study of curvature, see