Figure 1. Box plot of data from the Michelson–Morley experiment displaying outliers in the middle column.

In statistics, an outlier is an observation point that is distant from other observations.[1] An outlier may be due to variability in the measurement or it may indicate experimental error; the latter are sometimes excluded from the data set.[2]

Outliers can occur by chance in any distribution, but they are often indicative either of measurement error or that the population has a heavy-tailed distribution. In the former case one wishes to discard them or use statistics that are robust to outliers, while in the latter case they indicate that the distribution has high kurtosis and that one should be very cautious in using tools or intuitions that assume a normal distribution. A frequent cause of outliers is a mixture of two distributions, which may be two distinct sub-populations, or may indicate 'correct trial' versus 'measurement error'; this is modeled by a mixture model.

In most larger samplings of data, some data points will be further away from the sample mean than what is deemed reasonable. This can be due to incidental systematic error or flaws in the theory that generated an assumed family of probability distributions, or it may be that some observations are far from the center of the data. Outlier points can therefore indicate faulty data, erroneous procedures, or areas where a certain theory might not be valid. However, in large samples, a small number of outliers is to be expected (and not due to any anomalous condition).

Naive interpretation of statistics derived from data sets that include outliers may be misleading. For example, if one is calculating the average temperature of 10 objects in a room, and nine of them are between 20 and 25 degrees Celsius, but an oven is at 175 °C, the median of the data will be between 20 and 25 °C but the mean temperature will be between 35.5 and 40 °C. In this case, the median better reflects the temperature of a randomly sampled object than the mean; naively interpreting the mean as "a typical sample", equivalent to the median, is incorrect. As illustrated in this case, outliers may be indicative of data points that belong to a different population than the rest of the sample set.

Estimators capable of coping with outliers are said to be robust: the median is a robust statistic, while the mean is not.[3]

Outliers can have many anomalous causes. A physical apparatus for taking measurements may have suffered a transient malfunction. There may have been an error in data transmission or transcription. Outliers arise due to changes in system behaviour, fraudulent behaviour, human error, instrument error or simply through natural deviations in populations. A sample may have been contaminated with elements from outside the population being examined. Alternatively, an outlier could be the result of a flaw in the assumed theory, calling for further investigation by the researcher. Additionally, the pathological appearance of outliers of a certain form appears in a variety of datasets, indicating that the causative mechanism for the data might differ at the extreme end (King effect).

There is no rigid mathematical definition of what constitutes an outlier; determining whether or not an observation is an outlier is ultimately a subjective exercise. There are various methods of outlier detection.[5][6][7] Some are graphical such as normal probability plots. Others are model-based. Box plots are a hybrid.

Model-based methods which are commonly used for identification assume that the data are from a normal distribution, and identify observations which are deemed "unlikely" based on mean and standard deviation:

It is proposed to determine in a series of

observations the limit of error, beyond which all observations involving so great an error may be rejected, provided there are as many as

such observations. The principle upon which it is proposed to solve this problem is, that the proposed observations should be rejected when the probability of the system of errors obtained by retaining them is less than that of the system of errors obtained by their rejection multiplied by the probability of making so many, and no more, abnormal observations. (Quoted in the editorial note on page 516 to Peirce (1982 edition) from A Manual of Astronomy 2:558 by Chauvenet.)

Other methods flag observations based on measures such as the interquartile range. For example, if

are the lower and upper quartiles respectively, then one could define an outlier to be any observation outside the range:

for some nonnegative constant

Other approaches are distance-based[12][13] and density-based,[14] and all of them frequently use the distance to the k-nearest neighbors to label observations as outliers or non-outliers.

The modified Thompson Tau test is a method used to determine if outlier exists in a data set. The strength of this method lies in the fact that it takes into account a data set’s standard deviation, average and provides a statistically determined rejection zone; thus providing an objective method to determine if a data point is an outlier.

How it works: First, a data set's average is determined. Next the absolute deviation between each data point and the average are determined. Thirdly, a rejection region is determined using the formula:

The modified Thompson Tau test is used to find one outlier at a time (largest value of δ is removed if it is an outlier). Meaning, if a data point is found to be an outlier, it is removed from the data set and the test is applied again with a new average and rejection region. This process is continued until no outliers remain in a data set.

Some work has also examined outliers for nominal (or categorical) data. In the context of a set of examples (or instances) in a data set, instance hardness measures the probability that an instance will be misclassified (

is the assigned class label and

).[16] Ideally, instance hardness would be calculated by summing over the set of all possible hypotheses

Practically, this formulation is unfeasible as

is potentially or infinite and calculating

is unknown for many algorithms. Thus, instance hardness can be approximated using a diverse subset

is the hypothesis induced by learning algorithm

. Instance hardness provides a continuous value for determining if an instance is an outlier instance.

The choice of how to deal with an outlier should depend on the cause.

Even when a normal distribution model is appropriate to the data being analyzed, outliers are expected for large sample sizes and should not automatically be discarded if that is the case. The application should use a classification algorithm that is robust to outliers to model data with naturally occurring outlier points.

Deletion of outlier data is a controversial practice frowned on by many scientists and science instructors; while mathematical criteria provide an objective and quantitative method for data rejection, they do not make the practice more scientifically or methodologically sound, especially in small sets or where a normal distribution cannot be assumed. Rejection of outliers is more acceptable in areas of practice where the underlying model of the process being measured and the usual distribution of measurement error are confidently known. An outlier resulting from an instrument reading error may be excluded but it is desirable that the reading is at least verified.

In regression problems, an alternative approach may be to only exclude points which exhibit a large degree of influence on the parameters, using a measure such as Cook's distance.[17]

If a data point (or points) is excluded from the data analysis, this should be clearly stated on any subsequent report.

The possibility should be considered that the underlying distribution of the data is not approximately normal, having "fat tails". For instance, when sampling from a Cauchy distribution,[18] the sample variance increases with the sample size, the sample mean fails to converge as the sample size increases, and outliers are expected at far larger rates than for a normal distribution. 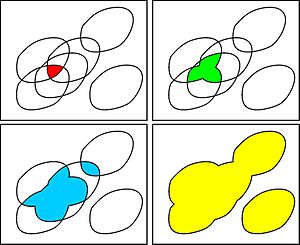 In cases where the cause of the outliers is known, it may be possible to incorporate this effect into the model structure, for example by using a hierarchical Bayes model or a mixture model.[20][21]