Parallelepipeds are a subclass of the prismatoids.

Any of the three pairs of parallel faces can be viewed as the base planes of the prism. A parallelepiped has three sets of four parallel edges; the edges within each set are of equal length.

A space-filling tessellation is possible with congruent copies of any parallelepiped. 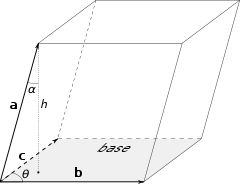 The volume of a parallelepiped is the product of the area of its base A and its height h. The base is any of the six faces of the parallelepiped. The height is the perpendicular distance between the base and the opposite face.

This is true because, if we choose b and c to represent the edges of the base, the area of the base is, by definition of the cross product (see geometric meaning of cross product),

where θ is the angle between b and c, and the height is

where α is the internal angle between a and h.

which is, by definition of the scalar product, equivalent to the absolute value of a · (b × c), Q.E.D..

The latter expression is also equivalent to the absolute value of the determinant of a three dimensional matrix built using a, b and c as rows (or columns):

This is found using Cramer's Rule on three reduced two dimensional matrices found from the original.

If a, b, and c are the parallelepiped edge lengths, and α, β, and γ are the internal angles between the edges, the volume is 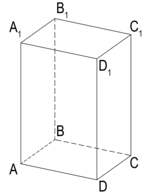 For parallelepipeds with a symmetry plane there are two cases:

Coxeter called the generalization of a parallelepiped in higher dimensions a parallelotope.

The diagonals of an n-parallelotope intersect at one point and are bisected by this point. Inversion in this point leaves the n-parallelotope unchanged. See also fixed points of isometry groups in Euclidean space.

can be computed by means of the Gram determinant. Alternatively, the volume is the norm of the exterior product of the vectors:

The word appears as parallelipipedon in Sir Henry Billingsley's translation of Euclid's Elements, dated 1570. In the 1644 edition of his Cursus mathematicus, Pierre Hérigone used the spelling parallelepipedum. The Oxford English Dictionary cites the present-day parallelepiped as first appearing in Walter Charleton's Chorea gigantum (1663).

Charles Hutton's Dictionary (1795) shows parallelopiped and parallelopipedon, showing the influence of the combining form parallelo-, as if the second element were pipedon rather than epipedon. Noah Webster (1806) includes the spelling parallelopiped. The 1989 edition of the Oxford English Dictionary describes parallelopiped (and parallelipiped) explicitly as incorrect forms, but these are listed without comment in the 2004 edition, and only pronunciations with the emphasis on the fifth syllable pi (/paɪ/) are given.

A change away from the traditional pronunciation has hidden the different partition suggested by the Greek roots, with epi- ("on") and pedon ("ground") combining to give epiped, a flat "plane". Thus the faces of a parallelepiped are planar, with opposite faces being parallel.