The Pareto distribution, named after the Italian civil engineer, economist, and sociologist Vilfredo Pareto, is a power law probability distribution that is used in description of social, scientific, geophysical, actuarial, and many other types of observable phenomena.

If X is a random variable with a Pareto (Type I) distribution,[1] then the probability that X is greater than some number x, i.e. the survival function (also called tail function), is given by

From the definition, the cumulative distribution function of a Pareto random variable with parameters α and xm is

When plotted on linear axes, the distribution assumes the familiar J-shaped curve which approaches each of the orthogonal axes asymptotically. All segments of the curve are self-similar (subject to appropriate scaling factors). When plotted in a log-log plot, the distribution is represented by a straight line.

It follows (by differentiation) that the probability density function is

where Γ(a, x) is the incomplete gamma function.

The conditional probability distribution of a Pareto-distributed random variable, given the event that it is greater than or equal to a particular number

, is a Pareto distribution with the same Pareto index

. Suppose that for all

The Pareto distribution hierarchy is summarized in the next table comparing the survival functions (complementary CDF).

In this section, the symbol xm, used before to indicate the minimum value of x, is replaced by σ.

The shape parameter α is the tail index, μ is location, σ is scale, γ is an inequality parameter. Some special cases of Pareto Type (IV) are

The finiteness of the mean, and the existence and the finiteness of the variance depend on the tail index α (inequality index γ). In particular, fractional δ-moments are finite for some δ > 0, as shown in the table below, where δ is not necessarily an integer.

Feller[3][5] defines a Pareto variable by transformation U = Y−1 − 1 of a beta random variable Y, whose probability density function is

where B( ) is the beta function. If

are independent Gamma variables, another construction of a Feller–Pareto (FP) variable is[7]

Pareto originally used this distribution to describe the allocation of wealth among individuals since it seemed to show rather well the way that a larger portion of the wealth of any society is owned by a smaller percentage of the people in that society. He also used it to describe distribution of income.[8] This idea is sometimes expressed more simply as the Pareto principle or the "80-20 rule" which says that 20% of the population controls 80% of the wealth.[9] However, the 80-20 rule corresponds to a particular value of α, and in fact, Pareto's data on British income taxes in his Cours d'économie politique indicates that about 30% of the population had about 70% of the income. The probability density function (PDF) graph at the beginning of this article shows that the "probability" or fraction of the population that owns a small amount of wealth per person is rather high, and then decreases steadily as wealth increases. (Note that the Pareto distribution is not realistic for wealth for the lower end. In fact, net worth may even be negative.) This distribution is not limited to describing wealth or income, but to many situations in which an equilibrium is found in the distribution of the "small" to the "large". The following examples are sometimes seen as approximately Pareto-distributed: 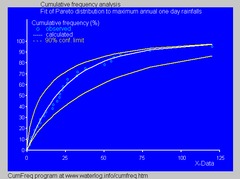 Relation to other distributions

Relation to the exponential distribution

The Pareto distribution is related to the exponential distribution as follows. If X is Pareto-distributed with minimum xm and index α, then

is Pareto-distributed with minimum xm and index α.

This can be shown using the standard change of variable techniques:

Relation to the log-normal distribution

Relation to the generalized Pareto distribution

The Pareto distribution with scale

is equivalent to the generalized Pareto distribution with location

. Vice versa one can get the Pareto distribution from the GPD by

Relation to the "Pareto principle"

This does not apply only to income, but also to wealth, or to anything else that can be modeled by this distribution.

This excludes Pareto distributions in which 0 < α ≤ 1, which, as noted above, have infinite expected value, and so cannot reasonably model income distribution. 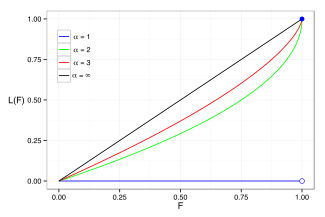 where x(F) is the inverse of the CDF. For the Pareto distribution,

and the Lorenz curve is calculated to be

Although the numerator and denominator in the expression for

, their ratio does not, yielding L=0 in these cases, which yields a Gini coefficient of unity. Examples of the Lorenz curve for a number of Pareto distributions are shown in the graph on the right.

The likelihood function for the Pareto distribution parameters α and xm, given a sample x = (x1, x2, ..., xn), is

Therefore, the logarithmic likelihood function is

It can be seen that

To find the estimator for α, we compute the corresponding partial derivative and determine where it is zero:

Thus the maximum likelihood estimator for α is:

The expected statistical error is:[16]

has an Inverse-gamma distribution with shape and scale parameters n−1 and nα, respectively.

Since α is positive, the gradient −(α+1) is negative.

Random samples can be generated using inverse transform sampling. Given a random variate U drawn from the uniform distribution on the unit interval (0, 1], the variate T given by

The probability density function is

If U is uniformly distributed on (0, 1), then applying inverse-transform method [19]

The symmetric Pareto distribution can be defined by the probability density function:[20]

It has a similar shape to a Pareto distribution for x > xm and is mirror symmetric about the vertical axis.