Pareto efficiency, or Pareto optimality, is a state of allocation of resources in which it is impossible to make any one individual better off without making at least one individual worse off. The term is named after Vilfredo Pareto (1848–1923), an Italian economist who used the concept in his studies of economic efficiency and income distribution. The concept has applications in academic fields such as economics, engineering, and the life sciences.

Pareto efficiency is a minimal notion of efficiency and does not necessarily result in a socially desirable distribution of resources: it makes no statement about equality, or the overall well-being of a society.[1][2] The notion of Pareto efficiency can also be applied to the selection of alternatives in engineering and similar fields. Each option is first assessed under multiple criteria and then a subset of options is identified with the property that no other option can categorically outperform any of its members.

A production-possibility frontier is an example of a Pareto Efficient Frontier. The connected line of red points represent Pareto optimal choices of production.

It is important to note, however, that a change from an inefficient allocation to an efficient one is not necessarily a Pareto improvement. Thus, in practice, ensuring that nobody is disadvantaged by a change aimed at achieving Pareto efficiency may require compensation of one or more parties. For instance, if a change in economic policy eliminates a monopoly and that market subsequently becomes competitive and more efficient, the monopolist will be made worse off. However, the loss to the monopolist will be more than the offset by the gain in efficiency. This means the monopolist can be compensated for its loss while still leaving a net gain for others in the economy, a Pareto improvement.

In real-world practice, such compensations have unintended consequences. They can lead to incentive distortions over time as agents anticipate such compensations and change their actions accordingly. Under certain idealized conditions, it can be shown that a system of free markets will lead to a Pareto efficient outcome. This is called the first welfare theorem. It was first demonstrated mathematically by economists Kenneth Arrow and Gérard Debreu. However, the result only holds under the restrictive assumptions necessary for the proof (markets exist for all possible goods so there are no externalities, all markets are in full equilibrium, markets are perfectly competitive, transaction costs are negligible, and market participants have perfect information). In the absence of perfect information or complete markets, outcomes will generically be Pareto inefficient, per the Greenwald–Stiglitz theorem.[3] 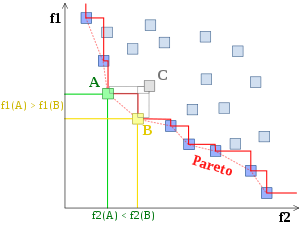 Example of a Pareto frontier. The boxed points represent feasible choices, and smaller values are preferred to larger ones. Point C is not on the Pareto Frontier because it is dominated by both point A and point B. Points A and B are not strictly dominated by any other, and hence do lie on the frontier.

For a given system, the Pareto frontier or Pareto set is the set of parameterizations (allocations) that are all Pareto efficient. Finding Pareto frontiers is particularly useful in engineering. By yielding all of the potentially optimal solutions, a designer can make focused tradeoffs within this constrained set of parameters, rather than needing to consider the full ranges of parameters.

The Pareto frontier, P(Y), may be more formally described as follows. Consider a system with function

, where X is a compact set of feasible decisions in the metric space

, and Y is the feasible set of criterion vectors in

We assume that the preferred directions of criteria values are known. A point

is preferred to (strictly dominating) another point

. The Pareto frontier is thus written as:

Relationship to marginal rate of substitution

An important fact about the Pareto frontier in economics is that at a Pareto efficient allocation, the marginal rate of substitution is the same for all consumers. A formal statement can be derived by considering a system with m consumers and n goods, and a utility function of each consumer as

is the vector of goods, both for all i. The supply constraint is written

. To optimize this problem, Lagrange multipliers are used:

is the marginal utility on f' of x (the partial derivative of f with respect to x).

Rearranging these to eliminate the multipliers gives the wanted result:

Algorithms for computing the Pareto frontier of a finite set of alternatives have been studied in computer science, power engineering,[4] sometimes referred to as the maximum vector problem or the skyline query.[5][6]

Pareto efficiency does not require an equitable distribution of wealth. An economy in which the wealthy hold the vast majority of resources can be Pareto efficient. This possibility is inherent in the definition of Pareto efficiency; by requiring that an allocation leave no participant worse off, Pareto efficiency tends to favor outcomes that do not depart radically from the status quo.

Amartya Sen has elaborated a mathematical basis for this criticism, pointing out that under relatively plausible starting conditions, systems of social choice will converge to Pareto efficient, but inequitable, distributions.[7] A simple example is the distribution of a pie among three people. The most equitable distribution would assign one third to each person. However the assignment of, say, a half section to each of two individuals and none to the third is also Pareto optimal despite not being equitable, because none of the recipients is left worse off than before, and there are many other such distributions. An example of a Pareto inefficient distribution of the pie would be allocation of a quarter of the pie to each of the three, with the remainder discarded. The origin of the pie is conceived as immaterial in these examples. In such cases, in which a "windfall" that none of the potential distributees actually produced is to be allocated (e.g., land, inherited wealth, a portion of the broadcast spectrum, or some other resource), the criterion of Pareto efficiency does not determine a unique optimal allocation.