In statistics, the Pearson product-moment correlation coefficient (Template:IPAc-en) (sometimes referred to as the PPMCC or PCC or Pearson's r) is a measure of the linear correlation (dependence) between two variables X and Y, giving a value between +1 and −1 inclusive, where 1 is total positive correlation, 0 is no correlation, and −1 is total negative correlation. It is widely used in the sciences as a measure of the degree of linear dependence between two variables. It was developed by Karl Pearson from a related idea introduced by Francis Galton in the 1880s.[1][2][3] 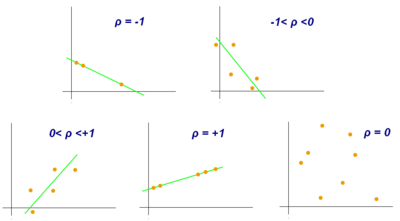 Pearson's correlation coefficient between two variables is defined as the covariance of the two variables divided by the product of their standard deviations. The form of the definition involves a "product moment", that is, the mean (the first moment about the origin) of the product of the mean-adjusted random variables; hence the modifier product-moment in the name.

is the standard deviation of

is the mean of

are the sample mean and sample standard deviation, respectively. Thus, the first parenthesized term in the previous summation is the standard score. (The terms for Y are similar.)

the correlation can also be written as

The above formula suggests a convenient single-pass algorithm for calculating sample correlations, but, depending on the numbers involved, it can sometimes be numerically unstable. 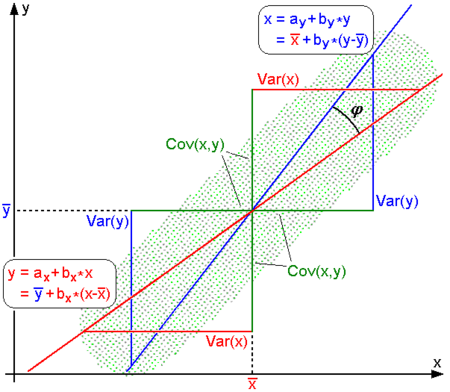 For uncentered data, it is possible to obtain a relation between correlation coefficient and the angle

between both possible regression lines y=gx(x) and x=gy(y). One can show[4] that r = sec(

For centered data (i.e., data which have been shifted by the sample mean so as to have an average of zero), the correlation coefficient can also be viewed as the cosine of the angle

between the two vectors of samples drawn from the two random variables (see below).

By the usual procedure for finding the angle

Interpretation of the size of a correlation

This figure gives a sense of how the usefulness of a Pearson correlation for predicting values varies with its magnitude. Given jointly normal X, Y with correlation ρ,

Several authors[5][6] have offered guidelines for the interpretation of a correlation coefficient. However, all such criteria are in some ways arbitrary and should not be observed too strictly.[6] The interpretation of a correlation coefficient depends on the context and purposes. A correlation of 0.8 may be very low if one is verifying a physical law using high-quality instruments, but may be regarded as very high in the social sciences where there may be a greater contribution from complicating factors.

Considering that the Pearson correlation coefficient falls between [−1, 1], the Pearson distance lies in [0, 2].

A graph showing the minimum value of Pearson's correlation coefficient that is significantly different from zero at the 0.05 level, for a given sample size.

Statistical inference based on Pearson's correlation coefficient often focuses on one of the following two aims:

We discuss methods of achieving one or both of these aims below.

Use a permutation test

To perform the permutation test, repeat steps (1) and (2) a large number of times. The p-value for the permutation test is the proportion of the r values generated in step (2) that are larger than the Pearson correlation coefficient that was calculated from the original data. Here "larger" can mean either that the value is larger in magnitude, or larger in signed value, depending on whether a two-sided or one-sided test is desired.

The bootstrap can be used to construct confidence intervals for Pearson's correlation coefficient. In the "non-parametric" bootstrap, n pairs (xi, yi) are resampled "with replacement" from the observed set of n pairs, and the correlation coefficient r is calculated based on the resampled data. This process is repeated a large number of times, and the empirical distribution of the resampled r values are used to approximate the sampling distribution of the statistic. A 95% confidence interval for ρ can be defined as the interval spanning from the 2.5th to the 97.5th percentile of the resampled r values.

has a Student's t-distribution in the null case (zero correlation).[8] This also holds approximately even if the observed values are non-normal, provided sample sizes are not very small.[9] For determining the critical values for r the inverse of this transformation is also needed:

Early work on the distribution of the sample correlation coefficient was carried out by R. A. Fisher[10][11] and A. K. Gayen.[12] Another early paper[13] provides graphs and tables for general values of ρ, for small sample sizes, and discusses computational approaches.

Use the exact distribution

For data that follows a bivariate normal distribution, the exact density function for the sample correlation of a normal bivariate is[14][15]

is the gamma function,

is the Gaussian hypergeometric function. In the special case when

, the density can be written as:

is the beta function, which is one way of writing the density of a Student's t-distribution, as above.

, therefore r is a biased estimator of

. The unique minimum variance unbiased estimator is given by[17]

. An approximately unbiased estimator can be obtained by truncating the previously mentioned series for

and solving the equation

, can be obtained by maximizing

Use the Fisher transformation

In practice, confidence intervals and hypothesis tests relating to ρ are usually carried out using the Fisher transformation:

If F(r) is the Fisher transformation of r, and n is the sample size, then F(r) approximately follows a normal distribution with

Thus, a z-score is

under the null hypothesis of that

, given the assumption that the sample pairs are independent and identically distributed and follow a bivariate normal distribution. Thus an approximate p-value can be obtained from a normal probability table. For example, if z = 2.2 is observed and a two-sided p-value is desired to test the null hypothesis that

The inverse Fisher transformation bring the interval back to the correlation scale.

The square of the sample correlation coefficient is typically denoted r2 and called the coefficient of determination, estimates the fraction of the variance in Y that is explained by X in a simple linear regression. As a starting point, the total variation in the Yi around their average value can be decomposed as follows

are the fitted values from the regression analysis. This can be rearranged to give

Next, we apply a property of least square regression models, that the sample covariance between

is zero. Thus, the sample correlation coefficient between the observed and fitted response values in the regression can be written

is the proportion of variance in Y explained by a linear function of X.

Sensitivity to the data distribution

Like many commonly used statistics, the sample statistic r is not robust,[18] so its value can be misleading if outliers are present.[19][20] Specifically, the PMCC is neither distributionally robust,{{ safesubst:#invoke:Unsubst||date=__DATE__ |$B= {{#invoke:Category handler|main}}{{#invoke:Category handler|main}}[citation needed] }} nor outlier resistant[18] (see Robust statistics#Definition). Inspection of the scatterplot between X and Y will typically reveal a situation where lack of robustness might be an issue, and in such cases it may be advisable to use a robust measure of association. Note however that while most robust estimators of association measure statistical dependence in some way, they are generally not interpretable on the same scale as the Pearson correlation coefficient.

Statistical inference for Pearson's correlation coefficient is sensitive to the data distribution. Exact tests, and asymptotic tests based on the Fisher transformation can be applied if the data are approximately normally distributed, but may be misleading otherwise. In some situations, the bootstrap can be applied to construct confidence intervals, and permutation tests can be applied to carry out hypothesis tests. These non-parametric approaches may give more meaningful results in some situations where bivariate normality does not hold. However the standard versions of these approaches rely on exchangeability of the data, meaning that there is no ordering or grouping of the data pairs being analyzed that might affect the behavior of the correlation estimate.

A stratified analysis is one way to either accommodate a lack of bivariate normality, or to isolate the correlation resulting from one factor while controlling for another. If W represents cluster membership or another factor that it is desirable to control, we can stratify the data based on the value of W, then calculate a correlation coefficient within each stratum. The stratum-level estimates can then be combined to estimate the overall correlation while controlling for W.[21]

Suppose observations to be correlated have differing degrees of importance that can be expressed with a weight vector w. To calculate the correlation between vectors x and y with the weight vector w (all of length n),[22][23]

It is always possible to remove the correlation between random variables with a linear transformation, even if the relationship between the variables is nonlinear. A presentation of this result for population distributions is given by Cox & Hinkley.[24]

is the jth variable of sample i. Let

where an exponent of −1/2 represents the matrix square root of the inverse of a matrix. The covariance matrix of T will be the identity matrix. If a new data sample x is a row vector of n elements, then the same transform can be applied to x to get the transformed vectors d and t:

This decorrelation is related to principal components analysis for multivariate data.

The reflective correlation is symmetric, but it is not invariant under translation:

The sample reflective correlation is

The weighted version of the sample reflective correlation is

for a given scale

The scaled correlation across the entire signals

is then computed as

is Pearson's coefficient of correlation for segment

By choosing the parameter

Under heavy noise conditions, extracting the correlation coefficient between two sets of stochastic variables is nontrivial, in particular where Canonical Correlation Analysis reports on degraded correlation values due to the heavy noise contributions. A generalization of the approach is given elsewhere.[26]