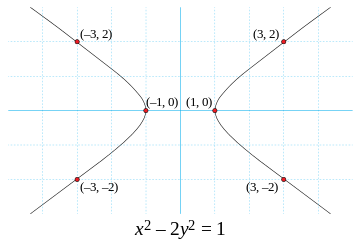 Pell's equation for n = 2 and six of its integer solutions

Pell's equation is any Diophantine equation of the form

where n is a given positive nonsquare integer and integer solutions are sought for x and y. In Cartesian coordinates, the equation has the form of a hyperbola; solutions occur wherever the curve passes through a point whose x and y coordinates are both integers, such as the trivial solution with x = 1 and y = 0. Joseph Louis Lagrange proved that, as long as n is not a perfect square, Pell's equation has infinitely many distinct integer solutions. These solutions may be used to accurately approximate the square root of n by rational numbers of the form x/y.

This equation was first studied extensively in ancient India, starting with Brahmagupta, who developed the chakravala method to solve Pell's equation and other quadratic indeterminate equations in his Brahma Sphuta Siddhanta in 628, about a thousand years before Pell's time. His Brahma Sphuta Siddhanta was translated into Arabic in 773 and was subsequently translated into Latin in 1126. Bhaskara II in the 12th century and Narayana Pandit in the 14th century both found general solutions to Pell's equation and other quadratic indeterminate equations. Solutions to specific examples of the Pell equation, such as the Pell numbers arising from the equation with n = 2, had been known for much longer, since the time of Pythagoras in Greece and to a similar date in India. The name of Pell's equation arose from Leonhard Euler's mistakenly attributing its study to John Pell.[1] Euler was aware of the work of Lord Brouncker, the first European mathematician to find a general solution of the equation, but apparently confused Brouncker with Pell.

As early as 400 BC in India and Greece, mathematicians studied the numbers arising from the n = 2 case of Pell's equation,

and from the closely related equation

because of the connection of these equations to the square root of two.[2] Indeed, if x and y are positive integers satisfying this equation, then x/y is an approximation of √2. The numbers x and y appearing in these approximations, called side and diameter numbers, were known to the Pythagoreans, and Proclus observed that in the opposite direction these numbers obeyed one of these two equations.[2] Similarly, Baudhayana discovered that x = 17, y = 12 and x = 577, y = 408 are two solutions to the Pell equation, and that 17/12 and 577/408 are very close approximations to the square root of two.

Later, Archimedes approximated the square root of 3 by the rational number 1351/780. Although he did not explain his methods, this approximation may be obtained in the same way, as a solution to Pell's equation.[2]

Around AD 250, Diophantus considered the equation

where a and c are fixed numbers and x and y are the variables to be solved for. This equation is different in form from Pell's equation but equivalent to it. Diophantus solved the equation for (a,c) equal to (1,1), (1,−1), (1,12), and (3,9). Al-Karaji, a 10th-century Persian mathematician, worked on similar problems to Diophantus.

In Indian mathematics, Brahmagupta discovered that

(see Brahmagupta's identity). Using this, he was able to "compose" triples

that were solutions of

, to generate the new triple

starting with one solution, but also, by dividing such a composition by

, integer or "nearly integer" solutions could often be obtained. For instance, for

) with itself to get the new triple

. Dividing throughout by 64 gave the triple

, which when composed with itself gave the desired integer solution

. Brahmagupta solved many Pell equations with this method; in particular he showed how to obtain solutions starting from an integer solution of

The first general method for solving the Pell equation (for all N) was given by Bhaskara II in 1150, extending the methods of Brahmagupta. Called the chakravala (cyclic) method, it starts by composing any triple

(that is, one which satisfies

) with the trivial triple

to get the triple

, which can be scaled down to

The general theory of Pell's equation, based on continued fractions and algebraic manipulations with numbers of the form

denote the sequence of convergents to the continued fraction for

Additional solutions from the fundamental solution

Once the fundamental solution is found, all remaining solutions may be calculated algebraically as

Equivalently, we may calculate subsequent solutions via the recurrence relations

An alternative method to solving, once finding the first non-trivial solution, one could take the original equation

and factor the left hand side as a difference of squares, yielding

Once in this form, one can simply raise each side of the equation to the kth power, and recombining the factored form to a single difference statement. The solution

will be of the form

Although writing out the fundamental solution (x1,y1) as a pair of binary numbers may require a large number of bits, it may in many cases be represented more compactly in the form

For instance, Archimedes' cattle problem may be solved using a Pell equation, the fundamental solution of which has 206545 digits if written out explicitly. However, instead of writing the solution as a pair of numbers, it may be written using the formula

only have 45 and 41 decimal digits, respectively. Alternatively, one may write even more concisely

In fact, it equivalent to solve the Pell equation

Methods related to the quadratic sieve approach for integer factorization may be used to collect relations between prime numbers in the number field generated by √n, and to combine these relations to find a product representation of this type. The resulting algorithm for solving Pell's equation is more efficient than the continued fraction method, though it still does not take polynomial time. Under the assumption of the generalized Riemann hypothesis, it can be shown to take time

where N = log n is the input size, similarly to the quadratic sieve Template:Harv.

Template:Harvtxt showed that a quantum computer can find a product representation, as described above, for the solution to Pell's equation in polynomial time. Hallgren's algorithm, which can be interpreted as an algorithm for finding the group of units of a real quadratic number field, was extended to more general fields by Template:Harvtxt.

As an example, consider the instance of Pell's equation for n = 7; that is,

The sequence of convergents for the square root of seven are

Therefore, the fundamental solution is formed by the pair (8, 3). Applying the recurrence formula to this solution generates the infinite sequence of solutions

The smallest solution can be very large. For example, the least solution to

The smallest solution of Pell equations

Pell's equation has connections to several other important subjects in mathematics.

Pell's equation is closely related to the theory of algebraic numbers, as the formula

is the norm for the ring

and for the closely related quadratic field

. Thus, a pair of integers

solves Pell's equation if and only if

is a unit with norm 1 in

. Dirichlet's unit theorem, that all units of

Thus, these polynomials can be generated by the standard technique for Pell equations of taking powers of a fundamental solution:

A general development of solutions of Pell's equation

can be presented, as the solutions x and y are approximates to the square root of n and thus are a special case of continued fraction approximations for quadratic irrationals.

The relationship to the continued fractions implies that the solutions to Pell's equation form a semigroup subset of the modular group. Thus, for example, if p and q satisfy Pell's equation, then

is a matrix of unit determinant. Products of such matrices take exactly the same form, and thus all such products yield solutions to Pell's equation. This can be understood in part to arise from the fact that successive convergents of a continued fraction share the same property: If pk−1/qk−1 and pk/qk are two successive convergents of a continued fraction, then the matrix

Størmer's theorem applies Pell equations to find pairs of consecutive smooth numbers. As part of this theory, Størmer also investigated divisibility relations among solutions to Pell's equation; in particular, he showed that each solution other than the fundamental solution has a prime factor that does not divide n.

The negative Pell equation is given by

It has also been extensively studied; it can be solved by the same method of using continued fractions and will have solutions when the period of the continued fraction has odd length. However we do not know which roots have odd period lengths so we do not know when the negative Pell equation is solvable. But we can eliminate certain n since a necessary but not sufficient condition for solvability is that n is not divisible by a prime of form 4m+3. Thus, for example, x2-3py2 = -1 is never solvable, but x2-5py2 = -1 may be, such as when p = 13 or 17 (of course, p needs to be with the form 4m+1), though not when p = 41.

The solutions of x (while n is in this sequence) are listed in Template:Oeis.

These ns are divisible neither by 4 nor by a prime of the form 4m + 3, but these conditions are not sufficient --- the counterexamples are listed in Template:Oeis. In fact, if and only if the period length of the continued fraction for

Template:Harvtxt demonstrate that the proportion of square-free n divisible by k primes of the form 4m+1 for which the negative Pell equation is solvable is at least 40%. If it does have a solution, then it can be shown that its fundamental solution leads to the fundamental one for the positive case by squaring both sides of eq. 1,

showing that fundamental solutions to the positive case are bigger than those for the negative case.

I. The related equation,

can be used to find solutions to the positive Pell equation for certain d. Legendre proved that all primes of form d = 4m + 3 solve one case of eq.2, with the form 8m + 3 solving the negative, and 8m + 7 for the positive. Their fundamental solution then leads to the one for x2−dy2 = 1. This can be shown by squaring both sides of eq. 2,

can also be used to find solutions to Pell equations for certain d, this time for the positive and negative case. For the following transformations,[6] if fundamental {u,v} are both odd, then it leads to fundamental {x,y}.

Especially for the last transformation, it can be seen how solutions to {u,v} are much smaller than {x,y}, since the latter are sextic and quintic polynomials in terms of u.