This diagram shows the nomenclature for the different phase transitions.

A phase transition is the transformation of a thermodynamic system from one phase or state of matter to another one by heat transfer. The term is most commonly used to describe transitions between solid, liquid and gaseous states of matter, and, in rare cases, plasma. A phase of a thermodynamic system and the states of matter have uniform physical properties. During a phase transition of a given medium certain properties of the medium change, often discontinuously, as a result of the change of some external condition, such as temperature, pressure, or others. For example, a liquid may become gas upon heating to the boiling point, resulting in an abrupt change in volume. The measurement of the external conditions at which the transformation occurs is termed the phase transition. Phase transitions are common in nature and used today in many technologies.

Examples of phase transitions include:

A typical phase diagram. The dotted line gives the anomalous behavior of water. 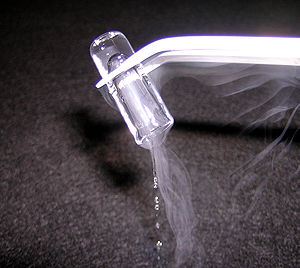 A small piece of rapidly melting solid argon simultaneously shows the transitions from solid to liquid and liquid to gas.

Phase transitions occur when the thermodynamic free energy of a system is non-analytic for some choice of thermodynamic variables (cf. phases). This condition generally stems from the interactions of a large number of particles in a system, and does not appear in systems that are too small.

At the phase transition point (for instance, boiling point) the two phases of a substance, liquid and vapor, have identical free energies and therefore are equally likely to exist. Below the boiling point, the liquid is the more stable state of the two, whereas above the gaseous form is preferred.

It is sometimes possible to change the state of a system diabatically (as opposed to adiabatically) in such a way that it can be brought past a phase transition point without undergoing a phase transition. The resulting state is metastable, i.e., less stable than the phase to which the transition would have occurred, but not unstable either. This occurs in superheating, supercooling, and supersaturation, for example.

Though useful, Ehrenfest's classification has been found to be an inaccurate method of classifying phase transitions, for it does not take into account the case where a derivative of free energy diverges (which is only possible in the thermodynamic limit). For instance, in the ferromagnetic transition, the heat capacity diverges to infinity.

In the modern classification scheme, phase transitions are divided into two broad categories, named similarly to the Ehrenfest classes:

First-order phase transitions are those that involve a latent heat. During such a transition, a system either absorbs or releases a fixed (and typically large) amount of energy. During this process, the temperature of the system will stay constant as heat is added: the system is in a "mixed-phase regime" in which some parts of the system have completed the transition and others have not. Familiar examples are the melting of ice or the boiling of water (the water does not instantly turn into vapor, but forms a turbulent mixture of liquid water and vapor bubbles). Imry and Wortis showed that quenched disorder can broaden a first-order transition in that the transformation is completed over a finite range of temperatures, but phenomena like supercooling and superheating survive and hysteresis is observed on thermal cycling.[3][4][5]

The liquid–glass transition is observed in many polymers and other liquids that can be supercooled far below the melting point of the crystalline phase. This is atypical in several respects. It is not a transition between thermodynamic ground states: it is widely believed that the true ground state is always crystalline. Glass is a quenched disorder state, and its entropy, density, and so on, depend on the thermal history. Therefore, the glass transition is primarily a dynamic phenomenon: on cooling a liquid, internal degrees of freedom successively fall out of equilibrium. Some theoretical methods predict an underlying phase transition in the hypothetical limit of infinitely long relaxation times.[7][8] No direct experimental evidence supports the existence of these transitions.

In any system containing liquid and gaseous phases, there exists a special combination of pressure and temperature, known as the critical point, at which the transition between liquid and gas becomes a second-order transition. Near the critical point, the fluid is sufficiently hot and compressed that the distinction between the liquid and gaseous phases is almost non-existent. This is associated with the phenomenon of critical opalescence, a milky appearance of the liquid due to density fluctuations at all possible wavelengths (including those of visible light).

Phase transitions often involve a symmetry breaking process. For instance, the cooling of a fluid into a crystalline solid breaks continuous translation symmetry: each point in the fluid has the same properties, but each point in a crystal does not have the same properties (unless the points are chosen from the lattice points of the crystal lattice). Typically, the high-temperature phase contains more symmetries than the low-temperature phase due to spontaneous symmetry breaking, with the exception of certain accidental symmetries (e.g. the formation of heavy virtual particles, which only occurs at low temperatures). [18]

From a theoretical perspective, order parameters arise from symmetry breaking. When this happens, one needs to introduce one or more extra variables to describe the state of the system. For example, in the ferromagnetic phase, one must provide the net magnetization, whose direction was spontaneously chosen when the system cooled below the Curie point. However, note that order parameters can also be defined for non-symmetry-breaking transitions. Some phase transitions, such as superconducting and ferromagnetic, can have order parameters for more than one degree of freedom. In such phases, the order parameter may take the form of a complex number, a vector, or even a tensor, the magnitude of which goes to zero at the phase transition.

There also exist dual descriptions of phase transitions in terms of disorder parameters. These indicate the presence of line-like excitations such as vortex- or defect lines.

Symmetry-breaking phase transitions play an important role in cosmology. It has been speculatedTemplate:According to whom that, in the hot early universe, the vacuum (i.e. the various quantum fields that fill space) possessed a large number of symmetries. As the universe expanded and cooled, the vacuum underwent a series of symmetry-breaking phase transitions. For example, the electroweak transition broke the SU(2)×U(1) symmetry of the electroweak field into the U(1) symmetry of the present-day electromagnetic field. This transition is important to understanding the asymmetry between the amount of matter and antimatter in the present-day universe (see electroweak baryogenesis.)

Progressive phase transitions in an expanding universe are implicated in the development of order in the universe, as is illustrated by the work of Eric Chaisson[20] and David Layzer.[21] See also Relational order theories.

It turns out that continuous phase transitions can be characterized by parameters known as critical exponents. The most important one is perhaps the exponent describing the divergence of the thermal correlation length by approaching the transition. For instance, let us examine the behavior of the heat capacity near such a transition. We vary the temperature Template:Mvar of the system while keeping all the other thermodynamic variables fixed, and find that the transition occurs at some critical temperature Tc . When Template:Mvar is near Tc , the heat capacity Template:Mvar typically has a power law behavior,

Such a behaviour has the heat capacity of amorphous materials near the glass transition temperature where the universal critical exponent α = 0.59[22] A similar behavior, but with the exponent Template:Mvar instead of Template:Mvar, applies for the correlation length.

The exponent Template:Mvar is positive. This is different with Template:Mvar. Its actual value depends on the type of phase transition we are considering.

For −1 < α < 0, the heat capacity has a "kink" at the transition temperature. This is the behavior of liquid helium at the lambda transition from a normal state to the superfluid state, for which experiments have found Template:Mvar = -0.013±0.003. At least one experiment was performed in the zero-gravity conditions of an orbiting satellite to minimize pressure differences in the sample.[23] This experimental value of α agrees with theoretical predictions based on variational perturbation theory.[24]

Some model systems do not obey a power-law behavior. For example, mean field theory predicts a finite discontinuity of the heat capacity at the transition temperature, and the two-dimensional Ising model has a logarithmic divergence. However, these systems are limiting cases and an exception to the rule. Real phase transitions exhibit power-law behavior.

Several other critical exponents, β, γ, δ, ν, and Template:Mvar, are defined, examining the power law behavior of a measurable physical quantity near the phase transition. Exponents are related by scaling relations, such as

It is a remarkable fact that phase transitions arising in different systems often possess the same set of critical exponents. This phenomenon is known as universality. For example, the critical exponents at the liquid–gas critical point have been found to be independent of the chemical composition of the fluid.

More impressively, but understandably from above, they are an exact match for the critical exponents of the ferromagnetic phase transition in uniaxial magnets. Such systems are said to be in the same universality class. Universality is a prediction of the renormalization group theory of phase transitions, which states that the thermodynamic properties of a system near a phase transition depend only on a small number of features, such as dimensionality and symmetry, and are insensitive to the underlying microscopic properties of the system. Again, the divergency of the correlation length is the essential point.

Critical slowing down and other phenomena

There are also other critical phenomena; e.g., besides static functions there is also critical dynamics. As a consequence, at a phase transition one may observe critical slowing down or speeding up. The large static universality classes of a continuous phase transition split into smaller dynamic universality classes. In addition to the critical exponents, there are also universal relations for certain static or dynamic functions of the magnetic fields and temperature differences from the critical value.

Another phenomenon which shows phase transitions and critical exponents is percolation. The simplest example is perhaps percolation in a two dimensional square lattice. Sites are randomly occupied with probability p. For small values of p the occupied sites form only small clusters. At a certain threshold pc a giant cluster is formed and we have a second order phase transition.[25] The behavior of P∞ near pc is, P∞~(p-pc)β, where β is a critical exponent.

In biolgical membranes, gel to liquid crystalline phase transitions play a very critical role in physiological functioning of biomembranes. In gel phase, due to low fluidity of membrane lipid fatty-acyl chains, membrane proteins have restricted movement and thus are restrained in exercise of their physiological role. Plants depend critically on photosynthesis by chloroplast thylakoid membranes which are exposed cold environmental temperatures. Thylakoid membranes retain innate fluidity even at relatively low temperatures because of high degree of fatty-acyl disorder allowed by their high content of linolenic acid, 18-carbon chain with 3-double bonds.[27] Gel-to-liquid crystalline phase transition temperature of biological membranes can be determined by many techniques including calorimetry, flouorescence, spin label electron paramagnetic resonance and NMR by recording measurements of the concerned parameter by at series of sample temperatures. A simple method for its determination from 13-C NMR line intensities has also been proposed.[28]

The relevance of phase transitions in neural networks has been pointed out, because of the complex and emergent nature of neural interactions. A point of view can be found in the very recent paper by Tkačik et al.[29]