In mathematics, the Poincaré metric, named after Henri Poincaré, is the metric tensor describing a two-dimensional surface of constant negative curvature. It is the natural metric commonly used in a variety of calculations in hyperbolic geometry or Riemann surfaces.

There are three equivalent representations commonly used in two-dimensional hyperbolic geometry. One is the Poincaré half-plane model, defining a model of hyperbolic space on the upper half-plane. The Poincaré disk model defines a model for hyperbolic space on the unit disk. The disk and the upper half plane are related by a conformal map, and isometries are given by Möbius transformations. A third representation is on the punctured disk, where relations for q-analogues are sometimes expressed. These various forms are reviewed below.

Overview of metrics on Riemann surfaces

where λ is a real, positive function of

. The length of a curve γ in the complex plane is thus given by

is the exterior product used to construct the volume form. The determinant of the metric is equal to

, so the square root of the determinant is

. The Euclidean volume form on the plane is

and so one has

is said to be the potential of the metric if

The Laplace–Beltrami operator is given by

The Gaussian curvature of the metric is given by

This curvature is one-half of the Ricci scalar curvature.

Isometries preserve angles and arc-lengths. On Riemann surfaces, isometries are identical to changes of coordinate: that is, both the Laplace–Beltrami operator and the curvature are invariant under isometries. Thus, for example, let S be a Riemann surface with metric

and T be a Riemann surface with metric

Here, the requirement that the map is conformal is nothing more than the statement

Metric and volume element on the Poincaré plane

This metric tensor is invariant under the action of SL(2,R). That is, if we write

then we can work out that

The infinitesimal transforms as

thus making it clear that the metric tensor is invariant under SL(2,R).

The invariant volume element is given by

The metric is given by

Another interesting form of the metric can be given in terms of the cross-ratio. Given any four points

in the compactified complex plane

, the cross-ratio is defined by

Then the metric is given by

are the endpoints, on the real number line, of the geodesic joining

. These are numbered so that

Conformal map of plane to disk

maps to the edge of the unit disk

can be used to rotate the disk by an arbitrary fixed amount.

The canonical mapping is

which takes i to the center of the disk, and 0 to the bottom of the disk.

Metric and volume element on the Poincaré disk

The volume element is given by

The Poincaré metric is given by

The geodesics for this metric tensor are circular arcs whose endpoints are orthogonal to the boundary of the disk. 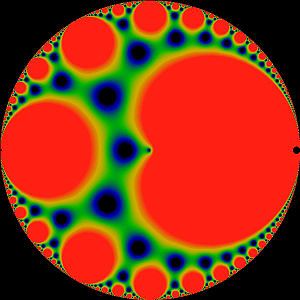 J-invariant in punctured disk coordinates; that is, as a function of the nome.

J-invariant in Poincare disk coordinates; note this disk is rotated by 90 degrees from canonical coordinates given in this article

where q is the nome and τ is the half-period ratio. In the notation of the previous sections, τ is the coordinate in the upper half-plane

. The mapping is to the punctured disk, because the value q=0 is not in the image of the map.

The potential of the metric is

The Poincaré metric is distance-decreasing on harmonic functions. This is an extension of the Schwarz lemma, called the Schwarz-Alhfors-Pick theorem.