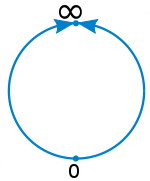 The real line with the point at infinity.

The point at infinity, also called ideal point, of the real number line is a point which, when added to the number line yields a closed curve called the real projective line,

. The real projective line is not equivalent to the extended real number line, which has two different points at infinity.

The point at infinity can also be added to the complex plane,

This condition does not depend on the ground field. If real or complex numbers are used, then, from the point of view of differential geometry, points at infinity form a hypersurface, which means a submanifold having one less dimension than the whole projective space. In the general case these facts may be formulated using algebraic manifolds.

{{#invoke:main|main}} In artistic drawing and technical perspective, the projection on the picture plane of the point at infinity of a class of parallel lines is called their vanishing point.