A polarizing filter cuts down the reflections (top) and made it possible to see the photographer through the glass at roughly Brewster's angle although reflections off the back window of the car are not cut because they are less-strongly polarized, according to the Fresnel equations.

A polarizer or polariser is an optical filter that passes light of a specific polarization and blocks waves of other polarizations.[1][2][3][4] It can convert a beam of light of undefined or mixed polarization into a beam with well-defined polarization, polarized light. The common types of polarizers are linear polarizers and circular polarizers. Polarizers are used in many optical techniques and instruments, and polarizing filters find applications in photography and liquid crystal display technology. Polarizers can also be made for other types of electromagnetic waves besides light, such as radio waves, microwaves, and X-rays. 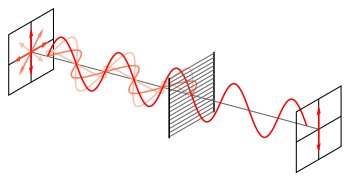 The simplest linear polarizer in concept is the wire-grid polarizer, which consists of a regular array of fine parallel metallic wires, placed in a plane perpendicular to the incident beam. Electromagnetic waves which have a component of their electric fields aligned parallel to the wires induce the movement of electrons along the length of the wires. Since the electrons are free to move in this direction, the polarizer behaves in a similar manner to the surface of a metal when reflecting light, and the wave is reflected backwards along the incident beam (minus a small amount of energy lost to joule heating of the wire).[5]

For practical use, the separation distance between the wires must be less than the wavelength of the radiation, and the wire width should be a small fraction of this distance. This means that wire-grid polarizers generally work best for microwaves and for far- and mid-infrared light. However, using advanced lithographic techniques, very tight pitch metallic grids can be made which polarize visible light to a useful degree. Since the degree of polarization depends little on wavelength and angle of incidence, they are used for broad-band applications such as projection.

Certain crystals, due to the effects described by crystal optics, show dichroism, preferential absorption of light which is polarized in particular directions. They can therefore be used as linear polarizers. The best known crystal of this type is tourmaline. However, this crystal is seldom used as a polarizer, since the dichroic effect is strongly wavelength dependent and the crystal appears coloured. Herapathite is also dichroic, and is not strongly coloured, but is difficult to grow in large crystals.

A Polaroid polarizing filter functions similarly on an atomic scale to the wire-grid polarizer. It was originally made of microscopic herapathite crystals. Its current H-sheet form is made from polyvinyl alcohol (PVA) plastic with an iodine doping. Stretching of the sheet during manufacture causes the PVA chains to align in one particular direction. Valence electrons from the iodine dopant are able to move linearly along the polymer chains, but not transverse to them. So incident light polarized parallel to the chains is absorbed by the sheet; light polarized perpendicularly to the chains is transmitted. The durability and practicality of Polaroid makes it the most common type of polarizer in use, for example for sunglasses, photographic filters, and liquid crystal displays. It is also much cheaper than other types of polarizer.

A modern type of absorptive polarizer is made of elongated silver nanoparticles embedded in thin (≤0.5 mm) glass plates. These polarizers are more durable, and can polarize light much better than plastic Polaroid film, achieving polarization ratios as high as 100,000:1 and absorption of correctly polarized light as low as 1.5%.[6] Such glass polarizers perform best for short-wavelength infrared light, and are widely used in optical fiber communications.

Unlike absorptive polarizers, beam splitting polarizers do not need to absorb and dissipate the energy of the rejected polarization state, and so they are more suitable for use with high intensity beams such as laser light. True polarizing beamsplitters are also useful where the two polarization components are to be analyzed or used simultaneously.

A more useful polarized beam can be obtained by tilting the pile of plates at a steeper angle to the incident beam. Counterintuitively, using incident angles greater than Brewster's angle yields a higher degree of polarization of the transmitted beam, at the expense of decreased overall transmission. For angles of incidence steeper than 80° the polarization of the transmitted beam can approach 100% with as few as four plates, although the transmitted intensity is very low in this case.[7] Adding more plates and reducing the angle allows a better compromise between transmission and polarization to be achieved.

Other linear polarizers exploit the birefringent properties of crystals such as quartz and calcite. In these crystals, a beam of unpolarized light incident on their surface is split by refraction into two rays. Snell's law holds for one of these rays, the ordinary or o-ray, but not for the other, the extraordinary or e-ray. In general the two rays will be in different polarization states, though not in linear polarization states except for certain propagation directions relative to the crystal axis. The two rays also experience differing refractive indices in the crystal.

A Nicol prism was an early type of birefringent polarizer, that consists of a crystal of calcite which has been split and rejoined with Canada balsam. The crystal is cut such that the o- and e-rays are in orthogonal linear polarization states. Total internal reflection of the o-ray occurs at the balsam interface, since it experiences a larger refractive index in calcite than in the balsam, and the ray is deflected to the side of the crystal. The e-ray, which sees a smaller refractive index in the calcite, is transmitted through the interface without deflection. Nicol prisms produce a very high purity of polarized light, and were extensively used in microscopy, though in modern use they have been mostly replaced with alternatives such as the Glan–Thompson prism, Glan–Foucault prism, and Glan–Taylor prism. These prisms are not true polarizing beamsplitters since only the transmitted beam is fully polarized. 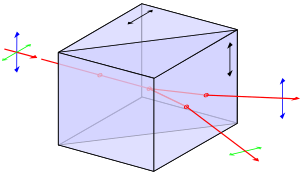 A Wollaston prism is another birefringent polarizer consisting of two triangular calcite prisms with orthogonal crystal axes that are cemented together. At the internal interface, an unpolarized beam splits into two linearly polarized rays which leave the prism at a divergence angle of 15°–45°. The Rochon and Sénarmont prisms are similar, but use different optical axis orientations in the two prisms. The Sénarmont prism is air spaced, unlike the Wollaston and Rochon prisms. These prisms truly split the beam into two fully polarized beams with perpendicular polarizations. The Nomarski prism is a variant of the Wollaston prism, which is widely used in differential interference contrast microscopy.

Thin-film linear polarizers are glass substrates on which a special optical coating is applied. Either Brewster's angle reflections or interference effects in the film cause them to act as beam-splitting polarizers. The substrate for the film can either be a plate, which is inserted into the beam at a particular angle, or a wedge of glass that is cemented to a second wedge to form a cube with the film cutting diagonally across the center (one form of this is the very common MacNeille cube[8]). Thin-film polarizers generally do not perform as well as Glan-type polarizers, but they are inexpensive and provide two beams that are about equally well polarized. The cube-type polarizers generally perform better than the plate polarizers. The former are easily confused with Glan-type birefringent polarizers.

Malus' law and other properties 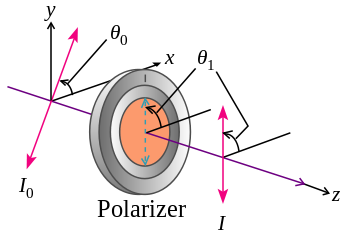 Malus' law, which is named after Étienne-Louis Malus, says that when a perfect polarizer is placed in a polarized beam of light, the intensity, I, of the light that passes through is given by

where I0 is the initial intensity, and θi is the angle between the light's initial polarization direction and the axis of the polarizer.

A beam of unpolarized light can be thought of as containing a uniform mixture of linear polarizations at all possible angles. Since the average value of

is 1/2, the transmission coefficient becomes

In practice, some light is lost in the polarizer and the actual transmission of unpolarized light will be somewhat lower than this, around 38% for Polaroid-type polarizers but considerably higher (>49.9%) for some birefringent prism types.

If two polarizers are placed one after another (the second polarizer is generally called an analyzer), the mutual angle between their polarizing axes gives the value of θ in Malus' law. If the two axes are orthogonal, the polarizers are crossed and in theory no light is transmitted, though again practically speaking no polarizer is perfect and the transmission is not exactly zero (for example, crossed Polaroid sheets appear slightly blue in colour). If a transparent object is placed between the crossed polarizers, any polarization effects present in the sample (such as birefringence) will be shown as an increase in transmission. This effect is used in polarimetry to measure the optical activity of a sample.

- frequency of the radiation passes through polarizer,

Circular polarizers, also referred to as circular polarizing filters, can be used to create circularly polarized light or alternatively to selectively absorb or pass clockwise and counter-clockwise circularly polarized light. They are used as polarizing filters in photography to reduce oblique reflections from non-metallic surfaces, and are the lenses of the 3D glasses worn for the viewing some stereoscopic movies (notably, the RealD 3D variety), where the polarization of light is used to differentiate which image should be seen by the left and right eye. 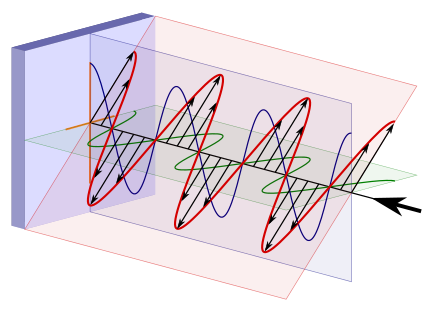 Linearly polarized light, represented using components, entering a quarter-wave plate. The blue and green curves are projections of the red line on the vertical and horizontal planes respectively. 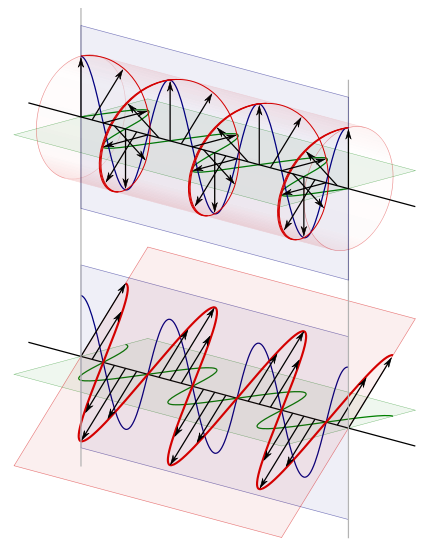 The top image is left-handed/counter-clockwise circularly polarized, as viewed from the receiver.[10] The bottom image is that of linearly polarized light. The blue and green curves are projections of the red lines on the vertical and horizontal planes respectively.

Animation of left-handed/counter-clockwise circularly polarized light. (Left-handed as viewed from the receiver.[10])

In trying to appreciate how the quarter-wave plate transforms the linearly polarized light, it is important to realize that the two components discussed are not entities in and of themselves but are merely mental constructs one uses to help appreciate what is happening. In the case of linearly and circularly polarized light, at each point in space, there is always a single electric field with a distinct vector direction, the quarter-wave plate merely has the effect of transforming this single electric field.

Circular polarizers can also be used to selectively absorb or pass right-handed or left-handed circularly polarized light. It is this feature which is utilized by the 3D glasses in stereoscopic cinemas such as RealD Cinema. A given polarizer which creates one of the two polarizations of light will pass that same polarization of light when that light is sent through it in the other direction. In contrast it will block light of the opposite polarization.

To understand this process, refer to the illustration on the right. It is absolutely identical to the earlier illustration even though the circularly polarized light at the top is now considered to be approaching the polarizer from the left. One can observe from the illustration that the leftward horizontal (as observed looking along the direction of travel) component is leading the vertical component and that when the horizontal component is retarded by one quarter of a wavelength it will be transformed into the linearly polarized light illustrated at the bottom and it will pass through the linear polarizer.