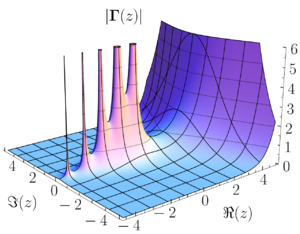 In the mathematical field of complex analysis, a pole of a meromorphic function is a certain type of singularity that behaves like the singularity of

Formally, suppose U is an open subset of the complex plane C, a is an element of U and f : U \ {a} → C is a function which is holomorphic over its domain. If there exists a holomorphic function g : U → C and a positive integer n, such that for all z in U \ {a}

holds, then a is called a pole of f. The smallest such n is called the order of the pole. A pole of order 1 is called a simple pole.

From above several equivalent characterizations can be deduced:

If n is the order of pole a, then necessarily g(a) ≠ 0 for the function g in the above expression. So we can put

for some h that is holomorphic in an open neighborhood of a and has a zero of order n at a. So informally one might say that poles occur as reciprocals of zeros of holomorphic functions.

Also, by the holomorphy of g, f can be expressed as:

This is a Laurent series with finite principal part. The holomorphic function

(on U) is called the regular part of f. So the point a is a pole of order n of f if and only if all the terms in the Laurent series expansion of f around a below degree −n vanish and the term in degree −n is not zero.

does that. Then, by definition, a function f holomorphic in a neighborhood of infinity has a pole at infinity if the function

(which will be holomorphic in a neighborhood of

Pole of a function on a complex manifold

In general, having a function

that is holomorphic in a neighborhood,

, in the complex manifold M, it is said that f has a pole at a of order n if, having a chart

has a pole of order n at

(which can be taken as being zero if a convenient choice of the chart is made). ] The pole at infinity is the simplest nontrivial example of this definition in which M is taken to be the Riemann sphere and the chart is taken to be

has a pole of order 1 or simple pole at

has a pole of order 2 at

and a pole of order 3 at

has poles of order 1 at

To see that, write

in Taylor series around the origin.

has a single pole at infinity of order 1.

If the first derivative of a function f has a simple pole at a, then a is a branch point of f. (The converse need not be true).

A non-removable singularity that is not a pole or a branch point is called an essential singularity.