{{ safesubst:#invoke:Unsubst||$N=Refimprove |date=__DATE__ |$B= {{#invoke:Message box|ambox}} }} Template:Infobox Currency The escudo (Template:IPA-pt, shield; sign $;[1] code: PTE) was the currency of Portugal prior to the introduction of the Euro on 1 January 1999 and its removal from circulation on 28 February 2002. The escudo was subdivided into 100 centavos.

The escudo was introduced on 22 May 1911, after the 1910 Republican revolution, to replace the real at the rate of 1,000 réis to 1 escudo. The term mil réis (thousand réis) remained a colloquial synonym of escudo up to the 1990s. One million réis was called one conto de réis, or simply one conto. This expression passed on to the escudo, meaning $1.000.

Inflation throughout the 20th century made centavos essentially worthless by its end, with fractional value coins with values such as $50 and 2$50 eventually withdrawn from circulation in the 1990s. With the entry of Portugal in the Eurozone, the conversion rate to the euro was set at 200$482 to €1.

The escudo was used in the Portuguese mainland, the Azores and Madeira, with no distinction of coins or banknotes. In Portugal's African colonies, the escudo was generally used up to independence, with Portuguese and sometime local coins circulating alongside banknotes of the Banco Nacional Ultramarino, rather than those of the Bank of Portugal used on the mainland. For more details, see the escudos of Angola, Cape Verde, Mozambique, Portuguese Guinea and São Tomé and Príncipe. Only Cape Verde continues use the escudo. In Macau, the currency during the colonial period was, as it is today, the pataca. Timor-Leste adopted the escudo whilst still a Portuguese colony, having earlier used the pataca. Portuguese India adopted the escudo before it was annexed by India. 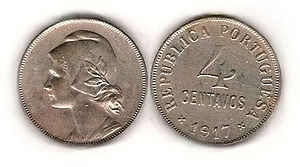 Coins in circulation at the time of the changeover to the euro were:

Coins ceased to be exchangeable for euro on December 31, 2002.

Also, people still referred to escudos at the time of the changeover in multiples of the older currency real (plural reis). Many people called the 2$50 coins dois e quinhentos (two and five-hundreds), referring to the correspondence 2$50 = 2500 reis. Tostão (plural tostões) is yet another multiple of real, with 1 tostão = 10 reis.

Banknotes in circulation at the time of the changeover to the euro were:

Banknotes can still be returned to the central bank Banco de Portugal and converted to euros until 28 February 2022.

"Conto" was the unofficial multiple of the escudo: 1 conto meant 1,000$00, 2 contos meant 2,000$00 and so on. The original expression was "conto de réis", which meant "one million réis". Since the escudo was worth 1000 réis (the older currency), therefore one "conto" was the same as a thousand escudos. The expression remained in usage after the advent of the euro, albeit less often, meaning €5, roughly worth 1000 escudos.