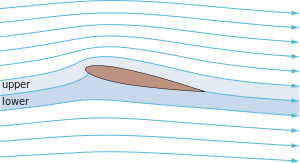 Potential-flow streamlines around a NACA 0012 airfoil at 11° angle of attack, with upper and lower streamtubes identified.

Applications of potential flow are for instance: the outer flow field for aerofoils, water waves, electroosmotic flow, and groundwater flow. For flows (or parts thereof) with strong vorticity effects, the potential flow approximation is not applicable.

A potential flow is constructed by adding simple elementary flows and observing the result.

Streamlines for the incompressible potential flow around a circular cylinder in a uniform onflow.

Sometimes, also the definition v = −∇φ, with a minus sign, is used. But here we will use the definition above, without the minus sign. From vector calculus it is known, that the curl of a gradient is equal to zero:[1]

and consequently the vorticity, the curl of the velocity field v, is zero:[1]

This implies that a potential flow is an irrotational flow. This has direct consequences for the applicability of potential flow. In flow regions where vorticity is known to be important, such as wakes and boundary layers, potential flow theory is not able to provide reasonable predictions of the flow.[2] Fortunately, there are often large regions of a flow where the assumption of irrotationality is valid, which is why potential flow is used for various applications. For instance in: flow around aircraft, groundwater flow, acoustics, water waves, and electroosmotic flow.[3]

In case of an incompressible flow — for instance of a liquid, or a gas at low Mach numbers; but not for sound waves — the velocity v has zero divergence:[1]

with the dot denoting the inner product. As a result, the velocity potential Template:Mvar has to satisfy Laplace's equation[1]

where ∇2 = ∇ ⋅ ∇ is the Laplace operator (sometimes also written Δ). In this case the flow can be determined completely from its kinematics: the assumptions of irrotationality and zero divergence of the flow. Dynamics only have to be applied afterwards, if one is interested in computing pressures: for instance for flow around airfoils through the use of Bernoulli's principle.

In two dimensions, potential flow reduces to a very simple system that is analyzed using complex analysis (see below).

Potential flow theory can also be used to model irrotational compressible flow. The full potential equation, describing a steady flow, is given by:[4]

where a is the local speed of sound. The flow velocity v is again equal to ∇Φ, with Φ the velocity potential. The full potential equation is valid for sub-, trans- and supersonic flow at arbitrary angle of attack, as long as the assumption of irrotationality is applicable.[4]

In case of either subsonic or supersonic (but not transonic or hypersonic) flow, at small angles of attack and thin bodies, an additional assumption can be made: the velocity potential is split into an undisturbed onflow velocity V∞ in the x-direction, and a small perturbation velocity ∇φ thereof. So:[4]

with M∞ = V∞ /a∞ the Mach number of the incoming free stream. This linear equation is much easier to solve than the full potential equation: it may be recast into Laplace's equation by a simple coordinate stretching in the x-direction.

Small-amplitude sound waves can be approximated with the following potential-flow model:[7]

Potential flow does not include all the characteristics of flows that are encountered in the real world. Potential flow theory cannot be applied for viscous internal flows.[2] Richard Feynman considered potential flow to be so unphysical that the only fluid to obey the assumptions was "dry water" (quoting John von Neumann).[8]

Incompressible potential flow also makes a number of invalid predictions, such as d'Alembert's paradox, which states that the drag on any object moving through an infinite fluid otherwise at rest is zero.[9]

More precisely, potential flow cannot account for the behaviour of flows that include a boundary layer.[2]

Nevertheless, understanding potential flow is important in many branches of fluid mechanics. In particular, simple potential flows (called elementary flows) such as the free vortex and the point source possess ready analytical solutions. These solutions can be superposed to create more complex flows satisfying a variety of boundary conditions. These flows correspond closely to real-life flows over the whole of fluid mechanics; in addition, many valuable insights arise when considering the deviation (often slight) between an observed flow and the corresponding potential flow.

The absence of boundary layer effects means that any streamline can be replaced by a solid boundary with no change in the flow field, a technique used in many aerodynamic design approaches. Another technique would be the use of Riabouchinsky solids.{{ safesubst:#invoke:Unsubst||$N=Dubious |date=__DATE__ |$B= {{#invoke:Category handler|main}}[dubious – discuss] }}

{{#invoke:main|main}} Potential flow in two dimensions is simple to analyze using conformal mapping, by the use of transformations of the complex plane. However, use of complex numbers is not required, as for example in the classical analysis of fluid flow past a cylinder. It is not possible to solve a potential flow using complex numbers in three dimensions.[10]

The basic idea is to use a holomorphic (also called analytic) or meromorphic function  f , which maps the physical domain (x, y) to the transformed domain (φ, ψ). While x, y, φ and Template:Mvar are all real valued, it is convenient to define the complex quantities

Then, because  f  is a holomorphic or meromorphic function, it has to satisfy the Cauchy-Riemann equations[10]

The velocity components (u, v), in the (x, y) directions respectively, can be obtained directly from  f  by differentiating with respect to Template:Mvar. That is[10]

Streamlines and equipotential lines are orthogonal to each other, since[10]

Any differentiable function may be used for  f . The examples that follow use a variety of elementary functions; special functions may also be used.

Note that multi-valued functions such as the natural logarithm may be used, but attention must be confined to a single Riemann surface.

The constant Template:Mvar is a scaling parameter: its absolute value |A| determines the scale, while its argument arg(A) introduces a rotation (if non-zero).

If w = Az1, that is, a power law with n = 1, the streamlines (i.e. lines of constant Template:Mvar) are a system of straight lines parallel to the Template:Mvar-axis. This is easiest to see by writing in terms of real and imaginary components:

thus giving φ = Ax and ψ = Ay. This flow may be interpreted as uniform flow parallel to the Template:Mvar-axis.

If n = 2, then w = Az2 and the streamline corresponding to a particular value of Template:Mvar are those points satisfying

which is a system of rectangular hyperbolae. This may be seen by again rewriting in terms of real and imaginary components. Noting that

it is seen (on simplifying) that the streamlines are given by

The velocity field is given by ∇φ, or

In fluid dynamics, the flowfield near the origin corresponds to a stagnation point. Note that the fluid at the origin is at rest (this follows on differentiation of  f (z) = z2 at z = 0).

The ψ = 0 streamline is particularly interesting: it has two (or four) branches, following the coordinate axes, i.e. x = 0 and y = 0.

With this interpretation, the flow is that of a vertically directed jet impinging on a horizontal flat plate.

The flow may also be interpreted as flow into a 90 degree corner if the regions specified by (say) x, y < 0 are ignored.

If n = 3, the resulting flow is a sort of hexagonal version of the n = 2 case considered above. Streamlines are given by, ψ = 3x2y − y3 and the flow in this case may be interpreted as flow into a 60 degree corner.

This is more easily interpreted in terms of real and imaginary components:

Thus the streamlines are circles that are tangent to the x-axis at the origin. The circles in the upper half-plane thus flow clockwise, those in the lower half-plane flow anticlockwise. Note that the velocity components are proportional to r−2; and their values at the origin is infinite. This flow pattern is usually referred to as a doublet and can be interpreted as the combination of source-sink pair of infinite strength kept at an infinitesimally small distance apart.

The velocity field is given by

or in polar coordinates:

This is the flow field associated with a quadrupole.[12]