Alternatively, in Bayesian terms, a prediction interval can be described as a credible interval for the variable itself, rather than for a parameter of the distribution thereof.

The concept of prediction intervals need not be restricted to inference about a single future sample value but can be extended to more complicated cases. For example, in the context of river flooding where analyses are often based on annual values of the largest flow within the year, there may be interest in making inferences about the largest flood likely to be experienced within the next 50 years.

Given a sample from a normal distribution, whose parameters are unknown, it is possible to give prediction intervals in the frequentist sense, i.e., an interval [a, b] based on statistics of the sample such that on repeated experiments, Xn+1 falls in the interval the desired percentage of the time; one may call these "predictive confidence intervals".[2]

A general technique of frequentist prediction intervals is to find and compute a pivotal quantity of the observables X1, ..., Xn, Xn+1 – meaning a function of observables and parameters whose probability distribution does not depend on the parameters – that can be inverted to give a probability of the future observation Xn+1 falling in some interval computed in terms of the observed values so far,

A prediction interval [l,u] for a future observation X in a normal distribution N(µ,σ2) with known mean and variance may easily be calculated from

, the standard score of X, is standard normal distributed.

with z the quantile in the standard normal distribution for which: 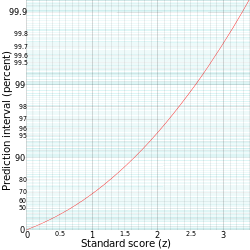 Prediction interval (on the y-axis) given from z (the quantile of the standard score, on the x-axis). The y-axis is logarithmically compressed (but the values on it are not modified).

The prediction interval is conventionally written as: 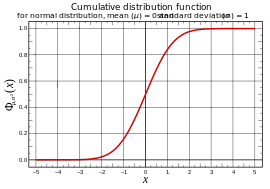 For a distribution with unknown parameters, a direct approach to prediction is to estimate the parameters and then use the associated quantile function – for example, one could use the sample mean

as estimate for μ and the sample variance s2 as an estimate for σ2. Note that there are two natural choices for s2 here – dividing by

yields an unbiased estimate, while dividing by n yields the maximum likelihood estimator, and either might be used. One then uses the quantile function with these estimated parameters

to give a prediction interval.

This approach is usable, but the resulting interval will not have the repeated sampling interpretation[5] – it is not a predictive confidence interval.

For the sequel, use the sample mean:

and the (unbiased) sample variance:

Given[6] a normal distribution with unknown mean μ but known variance 1, the sample mean

while the future observation

from which one can compute intervals as before. This is a predictive confidence interval in the sense that if one uses a quantile range of 100p%, then on repeated applications of this computation, the future observation

will fall in the predicted interval 100p% of the time.

and known variance 1, as this uses variance

, hence yields wider intervals. This is necessary for the desired confidence interval property to hold.

Conversely, given a normal distribution with known mean 0 but unknown variance

while the future observation

Taking the ratio of the future observation and the sample standard deviation cancels the σ, yielding a Student's t-distribution with n–1 degrees of freedom:

from which one can compute intervals as before.

and known mean 0, as it uses the t-distribution instead of the normal distribution, hence yields wider intervals. This is necessary for the desired confidence interval property to hold.

Combining the above for a normal distribution

with both μ and σ2 unknown yields the following ancillary statistic:[7]

falling in a given interval is then:

where Ta is the 100((1 + p)/2)th percentile of Student's t-distribution with n − 1 degrees of freedom. Therefore the numbers

are the endpoints of a 100p% prediction interval for

One can compute prediction intervals without any assumptions on the population; formally, this is a non-parametric method.[8]

What is the probability that X2 > X1?

The answer is exactly 50%, regardless of the underlying population – the probability of picking 3 and then 7 is the same as picking 7 and then 3, regardless of the particular probability of picking 3 or 7. Thus, if one picks a single sample X1, then 50% of the time the next sample will be greater, which yields (X1, +∞) as a 50% prediction interval for X2. Similarly, 50% of the time it will be smaller, which yields another 50% prediction interval for X2, namely (−∞, X1). Note that the assumption of a continuous distribution avoids the possibililty that values might be exactly equal; this would complicate matters.

One can visualize this by drawing the n samples on a line, which divides the line into n + 1 sections (n − 1 segments between samples, and 2 intervals going to infinity at both ends), and noting that Xn+1 has an equal chance of landing in any of these n + 1 sections. Thus one can also pick any k of these sections and give a k/(n + 1) prediction interval (or set, if the sections are not consecutive). For instance, if n = 2, then the probability that X3 will land between the existing 2 observations is 1/3.

Notice that while this gives the probability that a future observation will fall in a range, it does not give any estimate as to where in a segment it will fall – notably, if it falls outside the range of observed values, it may be far outside the range. See extreme value theory for further discussion. Formally, this applies not just to sampling from a population, but to any exchangeable sequence of random variables, not necessarily independent or identically distributed.

Contrast with other intervals

{{#invoke:main|main}} Note that in the formula for the predictive confidence interval no mention is made of the unobservable parameters μ and σ of population mean and standard deviation – the observed sample statistics

of sample mean and standard deviation are used, and what is estimated is the outcome of future samples.

Rather than using sample statistics as estimators of population parameters and applying confidence intervals to these estimates, one considers "the next sample"

as itself a statistic, and computes its sampling distribution.

A common application of prediction intervals is to regression analysis.

Suppose the data is being modeled by a straight line regression:

is the response variable,

is the explanatory variable, εi is a random error term, and

for the parameters, such as from a simple linear regression, the predicted response value yd for a given explanatory value xd is

(the point on the regression line), while the actual response would be

is called the mean response, and is an estimate of the expected value of yd,

A prediction interval instead gives an interval in which one expects yd to fall; this is not necessary if the actual parameters α and β are known (together with the error term εi), but if one is estimating from a sample, then one may use the standard error of the estimates for the intercept and slope (

), as well as their correlation, to compute a prediction interval.

In regression, Faraway (2002, p. 39) makes a distinction between intervals for predictions of the mean response vs. for predictions of observed response—affecting essentially the inclusion or not of the unity term within the square root in the expansion factors above; see [9] for details.