Map & traveler views of one-gee proper-acceleration from rest for one year.

Traveler spacetime for a constant-acceleration roundtrip.

In the standard inertial coordinates of special relativity, for unidirectional motion, proper acceleration is the rate of change of proper velocity with respect to coordinate time.

In an inertial frame in which the object is momentarily at rest, the proper acceleration 3-vector, combined with a zero time-component, yields the object's four-acceleration, which makes proper-acceleration's magnitude Lorentz-invariant. Thus the concept is useful: (i) with accelerated coordinate systems, (ii) at relativistic speeds, and (iii) in curved spacetime.

In situations in which gravitation is absent but the chosen coordinate system is not inertial, but is accelerated with the observer (such as the accelerated reference frame of an accelerating rocket, or a frame fixed upon objects in a centrifuge), then g-forces and corresponding proper accelerations felt by observers in these coordinate systems are caused by the mechanical forces which resist their weight in such systems. This weight, in turn, is produced by fictitious forces or "inertial forces" which appear in all such accelerated coordinate systems, in a manner somewhat like the weight produced by the "force of gravity" in systems where objects are fixed in space with regard to the gravitating body (as on the surface of the Earth).

Note that geometric accelerations (due to the connection term in the coordinate system's covariant derivative below) act on every ounce of our being, while proper-accelerations are usually caused by an external force. Introductory physics courses often treat gravity's downward (geometric) acceleration as one that's due to a mass-proportional force. This, along with diligent avoidance of unaccelerated frames, allows them to treat proper and coordinate acceleration as the same thing.

Even then if an object maintains a constant proper-acceleration from rest over an extended period in flat spacetime, observers in the rest frame will see the object's coordinate acceleration decrease as its coordinate velocity approaches lightspeed. The rate at which the object's proper-velocity goes up, nevertheless, remains constant.

Thus if the object is accelerating with the frame, observers fixed to the frame will see no acceleration at all.

Similarly, an object undergoing physical or proper acceleration ao will be seen by observers in a frame rotating with angular velocity ω to have coordinate acceleration:

In each of these cases, physical or proper acceleration differs from coordinate acceleration because the latter can be affected by your choice of coordinate system as well as by physical forces acting on the object. Those components of coordinate acceleration not caused by physical forces (like direct contact or electrostatic attraction) are often attributed (as in the Newtonian example above) to forces that: (i) act on every ounce of the object, (ii) cause mass-independent accelerations, and (iii) don't exist from all points of view. Such geometric (or improper) forces include Coriolis forces, Euler forces, g-forces, centrifugal forces and (as we see below) gravity forces as well.

Viewed from a flat spacetime slice 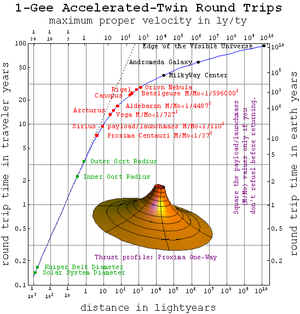 This plot shows how a spaceship capable of 1-gee (10 m/s2 or about 1.0 lightyear per year squared) acceleration for 100 years might power a round trip to most anywhere in the visible universe and back in a lifetime.

For constant unidirectional proper-acceleration, similar relationships exist between rapidity η and elapsed proper time Δτ, as well as between Lorentz factor γ and distance traveled Δx. To be specific:

where the various velocity parameters are related by

These equations describe some consequences of accelerated travel at high speed. For example, imagine a spaceship that can accelerate its passengers at "1 gee" (10 m/s2 or about 1.0 lightyear per year squared) halfway to their destination, and then decelerate them at "1 gee" for the remaining half so as to provide earth-like artificial gravity from point A to point B over the shortest possible time.[8][9] For a map-distance of ΔxAB, the first equation above predicts a midpoint Lorentz factor (up from its unit rest value) of γmid=1+α(ΔxAB/2)/c2. Hence the round-trip time on traveler clocks will be Δτ = 4(c/α) cosh−1(γmid), during which the time elapsed on map clocks will be Δt = 4(c/α) sinh[cosh−1(γmid)].

In the language of general relativity, the components of an object's acceleration four-vector A (whose magnitude is proper acceleration) are related to elements of the four-velocity via a covariant derivative D with respect to proper time τ:

Here U is the object's four-velocity, and Γ represents the coordinate system's 64 connection coefficients or Christoffel symbols. Note that the Greek subscripts take on four possible values, namely 0 for the time-axis and 1-3 for spatial coordinate axes, and that repeated indices are used to indicate summation over all values of that index. Trajectories with zero proper acceleration are referred to as geodesics.

The left hand side of this set of four equations (one each for the time-like and three spacelike values of index λ) is the object's proper-acceleration 3-vector combined with a null time component as seen from the vantage point of a reference or book-keeper coordinate system in which the object is at rest. The first term on the right hand side lists the rate at which the time-like (energy/mc) and space-like (momentum/m) components of the object's four-velocity U change, per unit time τ on traveler clocks.

Thus, as exemplified with the first two animations above, coordinate acceleration goes to zero whenever proper-acceleration is exactly canceled by the connection (or geometric acceleration) term on the far right.[10] Caution: This term may be a sum of as many as sixteen separate velocity and position dependent terms, since the repeated indices μ and ν are by convention summed over all pairs of their four allowed values.

The above equation also offers some perspective on forces and the equivalence principle. Consider local book-keeper coordinates[4] for the metric (e.g. a local Lorentz tetrad[5] like that which global positioning systems provide information on) to describe time in seconds, and space in distance units along perpendicular axes. If we multiply the above equation by the traveling object's rest mass m, and divide by Lorentz factor γ = dt/dτ, the spacelike components express the rate of momentum change for that object from the perspective of the coordinates used to describe the metric.

This in turn can be broken down into parts due to proper and geometric components of acceleration and force. If we further multiply the time-like component by lightspeed c, and define coordinate velocity as v = dx/dt, we get an expression for rate of energy change as well:

Nonetheless if we use this breakdown to describe the connection coefficient (Γ) term above in terms of geometric forces, then the motion of objects from the point of view of any coordinate system (at least at low speeds) can be seen as locally Newtonian. This is already common practice e.g. with centrifugal force and gravity. Thus the equivalence principle extends the local usefulness of Newton's laws to accelerated coordinate systems and beyond.

Surface dwellers on a planet

For low speed observers being held at fixed radius from the center of a spherical planet or star, coordinate acceleration ashell is approximately related to proper acceleration ao by:

On the other hand for r>>rs, an upward proper force of only GMm/r2 is needed to prevent one from accelerating downward. At the Earth's surface this becomes:

where g is the downward 9.8 m/s2 acceleration due to gravity, and

is a unit vector in the radially outward direction from the center of the gravitating body. Thus here an outward proper force of mg is needed to keep one from accelerating downward.

The spacetime equations of this section allow one to address all deviations between proper and coordinate acceleration in a single calculation. For example, let's calculate the Christoffel symbols:[11]

. This does not solve the problem yet, since Schwarzschild coordinates in curved spacetime are book-keeper coordinates[4] but not those of a local observer. The magnitude of the above proper acceleration 4-vector, namely

, is however precisely what we want i.e. the upward frame-invariant proper acceleration needed to counteract the downward geometric acceleration felt by dwellers on the surface of a planet.

A special case of the above Christoffel symbol set is the flat-space spherical coordinate set obtained by setting rs or M above to zero:

From this we can obtain, for example, the centripetal proper acceleration needed to cancel the centrifugal geometric acceleration of an object moving at constant angular velocity ω=dφ/dτ at the equator where θ=π/2. Forming the same 4-vector sum as above for the case of dθ/dτ and dr/dτ zero yields nothing more than the classical acceleration for rotational motion given above, i.e.

so that ao=ω2r. Coriolis effects also reside in these connection coefficients, and similarly arise from coordinate-frame geometry alone.