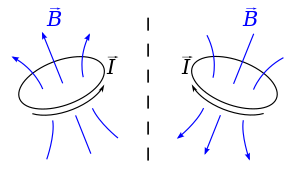 In physics and mathematics, a pseudovector (or axial vector) is a quantity that transforms like a vector under a proper rotation, but in three dimensions gains an additional sign flip under an improper rotation such as a reflection. Geometrically it is the opposite, of equal magnitude but in the opposite direction, of its mirror image. This is as opposed to a true or polar vector, which on reflection matches its mirror image.

In three dimensions the pseudovector p is associated with the cross product of two polar vectors a and b:[2]

The vector p calculated this way is a pseudovector. One example is the normal to an oriented plane. An oriented plane can be defined by two non-parallel vectors, a and b,[3] which can be said to span the plane. The vector a × b is a normal to the plane (there are two normals, one on each side – the right-hand rule will determine which), and is a pseudovector. This has consequences in computer graphics where it has to be considered when transforming surface normals.

A number of quantities in physics behave as pseudovectors rather than polar vectors, including magnetic field and angular velocity. In mathematics pseudovectors are equivalent to three-dimensional bivectors, from which the transformation rules of pseudovectors can be derived. More generally in n-dimensional geometric algebra pseudovectors are the elements of the algebra with dimension n − 1, written Λn−1Rn. The label 'pseudo' can be further generalized to pseudoscalars and pseudotensors, both of which gain an extra sign flip under improper rotations compared to a true scalar or tensor.

Physical examples of pseudovectors include magnetic field, torque, vorticity, and the angular momentum. 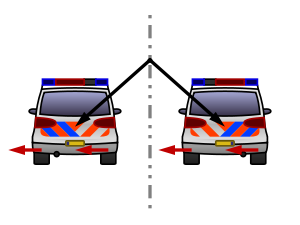 Each wheel of a car driving away from an observer has an angular momentum pseudovector pointing left. The same is true for the mirror image of the car.

The definition of a "vector" in physics (including both polar vectors and pseudovectors) is more specific than the mathematical definition of "vector" (namely, any element of an abstract vector space). Under the physics definition, a "vector" is required to have components that "transform" in a certain way under a proper rotation: In particular, if everything in the universe were rotated, the vector would rotate in exactly the same way. (The coordinate system is fixed in this discussion; in other words this is the perspective of active transformations.) Mathematically, if everything in the universe undergoes a rotation described by a rotation matrix R, so that a displacement vector x is transformed to x′ = Rx, then any "vector" v must be similarly transformed to v′ = Rv. This important requirement is what distinguishes a vector (which might be composed of, for example, the x-, y-, and z-components of velocity) from any other triplet of physical quantities (For example, the length, width, and height of a rectangular box cannot be considered the three components of a vector, since rotating the box does not appropriately transform these three components.)

(In the language of differential geometry, this requirement is equivalent to defining a vector to be a tensor of contravariant rank one.)

where the symbols are as described above, and the rotation matrix R can be either proper or improper. The symbol det denotes determinant; this formula works because the determinant of proper and improper rotation matrices are +1 and -1, respectively.

Suppose v1 and v2 are known pseudovectors, and v3 is defined to be their sum, v3 = v1 + v2. If the universe is transformed by a rotation matrix R, then v3 is transformed to

Therefore, v3 is neither a polar vector nor a pseudovector. For an improper rotation, v3 does not in general even keep the same magnitude:

If the magnitude of v3 were to describe a measurable physical quantity, that would mean that the laws of physics would not appear the same if the universe was viewed in a mirror. In fact, this is exactly what happens in the weak interaction: Certain radioactive decays treat "left" and "right" differently, a phenomenon which can be traced to the summation of a polar vector with a pseudovector in the underlying theory. (See parity violation.) 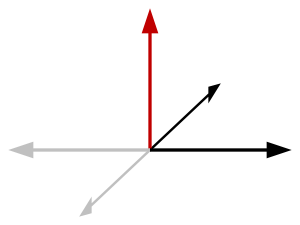 Under inversion the two vectors change sign, but their cross product is invariant [black are the two original vectors, grey are the inverted vectors, and red is their mutual cross product].

For a rotation matrix R, either proper or improper, the following mathematical equation is always true:

where v1 and v2 are any three-dimensional vectors. (This equation can be proven either through a geometric argument or through an algebraic calculation.)

Suppose v1 and v2 are known polar vectors, and v3 is defined to be their cross product, v3 = v1 × v2. If the universe is transformed by a rotation matrix R, then v3 is transformed to

So v3 is a pseudovector. Similarly, one can show:

Above, pseudovectors have been discussed using active transformations. An alternate approach, more along the lines of passive transformations, is to keep the universe fixed, but switch "right-hand rule" with "left-hand rule" everywhere in math and physics, including in the definition of the cross product. Any polar vector (e.g., a translation vector) would be unchanged, but pseudovectors (e.g., the magnetic field vector at a point) would switch signs. Nevertheless, there would be no physical consequences, apart from in the parity-violating phenomena such as certain radioactive decays.[4]

In geometric algebra the basic elements are vectors, and these are used to build a hierarchy of elements using the definitions of products in this algebra. In particular, the algebra builds pseudovectors from vectors.

The basic multiplication in the geometric algebra is the geometric product, denoted by simply juxtaposing two vectors as in ab. This product is expressed as:

The transformation properties of the pseudovector in three dimensions has been compared to that of the vector cross product by Baylis.[8] He says: "The terms axial vector and pseudovector are often treated as synonymous, but it is quite useful to be able to distinguish a bivector from its dual." To paraphrase Baylis: Given two polar vectors (that is, true vectors) a and b in three dimensions, the cross product composed from a and b is the vector normal to their plane given by c = a × b. Given a set of right-handed orthonormal basis vectors { eℓ }, the cross product is expressed in terms of its components as:

where superscripts label vector components. On the other hand, the plane of the two vectors is represented by the exterior product or wedge product, denoted by a ∧ b. In this context of geometric algebra, this bivector is called a pseudovector, and is the dual of the cross product.[9] The dual of e1 is introduced as e23 ≡ e2e3 = e2 ∧ e3, and so forth. That is, the dual of e1 is the subspace perpendicular to e1, namely the subspace spanned by e2 and e3. With this understanding,[10]

For details see Hodge dual. Comparison shows that the cross product and wedge product are related by:

Using the above relations, it is seen that if the vectors a and b are inverted by changing the signs of their components while leaving the basis vectors fixed, both the pseudovector and the cross product are invariant. On the other hand, if the components are fixed and the basis vectors eℓ are inverted, then the pseudovector is invariant, but the cross product changes sign. This behavior of cross products is consistent with their definition as vector-like elements that change sign under transformation from a right-handed to a left-handed coordinate system, unlike polar vectors.

Another important note is that pseudovectors, despite their name, are "vectors" in the common mathematical sense, i.e. elements of a vector space. The idea that "a pseudovector is different from a vector" is only true with a different and more specific definition of the term "vector" as discussed above.

|CitationClass=book }}: The dual of the wedge product a ∧ b is the cross product a × b.