A pulley is a wheel on an axle that is designed to support movement and change of direction of a cable or belt along its circumference.[1] Pulleys are used in a variety of ways to lift loads, apply forces, and to transmit power. In nautical contexts, the assembly of wheel, axle, and supporting shell is referred to as a "block."

A pulley is called a sheave or drum and may have a groove between two flanges around its circumference. The drive element of a pulley system can be a rope, cable, belt, or chain that runs over the pulley inside the groove.

Hero of Alexandria identified the pulley as one of six simple machines used to lift weights.[2] Pulleys are assembled to form a block and tackle in order to provide mechanical advantage to apply large forces. Pulleys are also assembled as part of belt and chain drives in order to transmit power from one rotating shaft to another.[3][4] 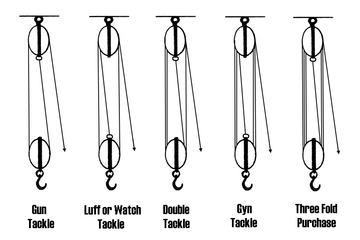 Various ways of rigging a tackle.[5]

A set of pulleys assembled so that they rotate independently on the same axle form a block. Two blocks with a rope attached to one of the blocks and threaded through the two sets of pulleys form a block and tackle.[6][7]

In the diagram on the right the ideal mechanical advantage of each of the block and tackle assemblies[5] shown is as follows: 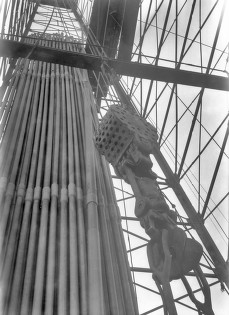 A hoist using the compound pulley system yielding an advantage of 4. The single fixed pulley is installed on the hoist (device). The two movable pulleys (joined together) are attached to the hook. One end of the rope is attached to the crane frame, another to the winch.

A rope and pulley system -- that is, a block and tackle -- is characterised by the use of a single continuous rope to transmit a tension force around one or more pulleys to lift or move a load—the rope may be a light line or a strong cable. This system is included in the list of simple machines identified by Renaissance scientists.[8][9]

If the rope and pulley system does not dissipate or store energy, then its mechanical advantage is the number of parts of the rope that act on the load. This can be shown as follows.

The simplest theory of operation for a pulley system assumes that the pulleys and lines are weightless, and that there is no energy loss due to friction. It is also assumed that the lines do not stretch.

These are different types of pulley systems:

By adding a pulley to the fixed block of a gun tackle the direction of the pulling force is reversed though the mechanical advantage remains the same, Diagram 3a. This is an example of the Luff tackle.

The mechanical advantage of a pulley system can be analyzed using free body diagrams which balance the tension force in the rope with the force of gravity on the load. In an ideal system, the massless and frictionless pulleys do not dissipate energy and allow for a change of direction of a rope that does not stretch or wear. In this case, a force balance on a free body that includes the load, W, and n supporting sections of a rope with tension T, yields:

The ratio of the load to the input tension force is the mechanical advantage MA of the pulley system,[11]

Thus, the mechanical advantage of the system is equal to the number of sections of rope supporting the load. 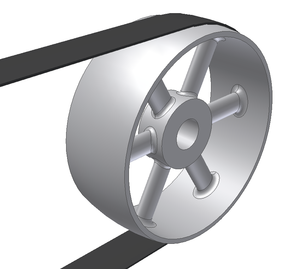 Flat belt on a belt pulley 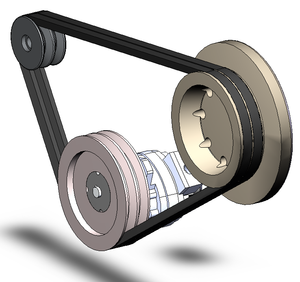 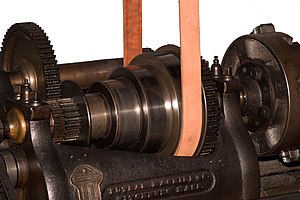 Cone pulley driven from above by a line shaft

A belt and pulley system is characterised by two or more pulleys in common to a belt. This allows for mechanical power, torque, and speed to be transmitted across axles. If the pulleys are of differing diameters, a mechanical advantage is realised.

A belt drive is analogous to that of a chain drive, however a belt sheave may be smooth (devoid of discrete interlocking members as would be found on a chain sprocket, spur gear, or timing belt) so that the mechanical advantage is approximately given by the ratio of the pitch diameter of the sheaves only, not fixed exactly by the ratio of teeth as with gears and sprockets.

In the case of a drum-style pulley, without a groove or flanges, the pulley often is slightly convex to keep the flat belt centred. It is sometimes referred to as a crowned pulley. Though once widely used on factory line shafts, this type of pulley is still found driving the rotating brush in upright vacuum cleaners, in belt sanders and bandsaws. [12] Agricultural tractors built up to the early 1950s generally had a belt pulley for a flat belt (which is what Belt Pulley magazine was named after). It has been replaced by other mechanisms with more flexibility in methods of use, such as power take-off and hydraulics.

Just as the diameters of gears (and, correspondingly, their number of teeth) determine a gear ratio and thus the speed increases or reductions and the mechanical advantage that they can deliver, the diameters of pulleys determine those same factors. Cone pulleys and step pulleys (which operate on the same principle, although the names tend to be applied to flat belt versions and V belt versions, respectively) are a way to provide multiple drive ratios in a belt-and-pulley system that can be shifted as needed, just as a transmission provides this function with a gear train that can be shifted. V belt step pulleys are the most common way that drill presses deliver a range of spindle speeds.