with at least one of the coefficients a, b, c, d, e, or f of the second-degree terms being non-zero. 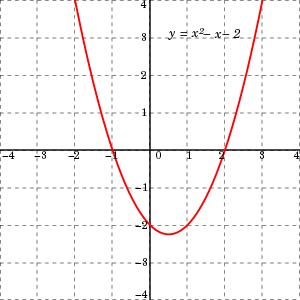 A univariate (single-variable) quadratic function has the form[1]

in the single variable x.The graph of a univariate quadratic function is a parabola whose axis of symmetry is parallel to the y-axis, as shown at right.

with at least one of a, b, c not equal to zero, and an equation setting this function equal to zero gives rise to a conic section (a circle or other ellipse, a parabola, or a hyperbola).

In general there can be an arbitrarily large number of variables, in which case the resulting surface is called a quadric, but the highest degree term must be of degree 2, such as x2, xy, yz, etc.

The adjective quadratic comes from the Latin word quadrātum ("square"). A term like x2 is called a square in algebra because it is the area of a square with side x.

In general, a prefix quadr(i)- indicates the number 4. Examples are quadrilateral and quadrant. Quadratum is the Latin word for square because a square has four sides.

The coefficients of a polynomial are often taken to be real or complex numbers, but in fact, a polynomial may be defined over any ring.

When using the term "quadratic polynomial", authors sometimes mean "having degree exactly 2", and sometimes "having degree at most 2". If the degree is less than 2, this may be called a "degenerate case". Usually the context will establish which of the two is meant.

Sometimes the word "order" is used with the meaning of "degree", e.g. a second-order polynomial.

Any single-variable quadratic polynomial may be written as

where x is the variable, and a, b, and c represent the coefficients. In elementary algebra, such polynomials often arise in the form of a quadratic equation

Any quadratic polynomial with two variables may be written as

Forms of a univariate quadratic function

A univariate quadratic function can be expressed in three formats:[2]

Graph of the univariate function 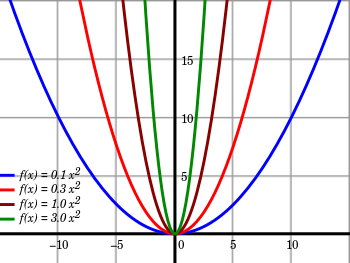 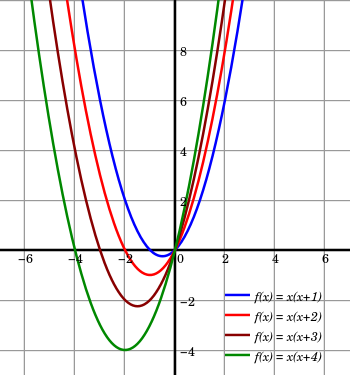 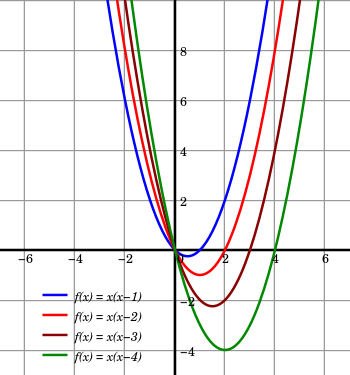 The coefficient a controls the speed of increase (or decrease) of the quadratic function from the vertex, greater positive a values makes the function increase faster and the graph appears more closed.

The coefficient b alone is the declivity of the parabola as y-axis intercepts.

The coefficient c controls the height of the parabola, more specifically, it is the point where the parabola intercept the y-axis.

The vertex of a parabola is the place where it turns; hence, it is also called the turning point. If the quadratic function is in vertex form, the vertex is (h, k). By the method of completing the square, one can turn the standard form

so the vertex of the parabola in standard form is

If the quadratic function is in factored form

the average of the two roots, i.e.,

is the x-coordinate of the vertex, and hence the vertex is

that passes through the vertex is also the axis of symmetry of the parabola.

Using calculus, the vertex point, being a maximum or minimum of the function, can be obtained by finding the roots of the derivative:

with the corresponding function value

so again the vertex point coordinates can be expressed as

Roots of the univariate function

The roots (zeros) of the univariate quadratic function

When the coefficients a, b, and c, are real or complex, the roots are

where the discriminant is defined as

The square root of a univariate quadratic function

The square root of a univariate quadratic function gives rise to one of the four conic sections, almost always either to an ellipse or to a hyperbola.

describes a hyperbola, as can be seen by squaring both sides. The directions of the axes of the hyperbola are determined by the ordinate of the minimum point of the corresponding parabola

describes either a circle or other ellipse or nothing at all. If the ordinate of the maximum point of the corresponding parabola

To iterate a function

, one applies the function repeatedly, using the output from one iteration as the input to the next.

One cannot always deduce the analytic form of

, which means the nth iteration of

. (The superscript can be extended to negative numbers, referring to the iteration of the inverse of

if the inverse exists.) But there are some analytically tractable cases.

For example, for the iterative equation

can be obtained, where

can be easily computed as

See Topological conjugacy for more detail about the relationship between f and g. And see Complex quadratic polynomial for the chaotic behavior in the general iteration.

where the initial condition parameter

, after a finite number of iterations

maps into a periodic sequence. But almost all

never repeats itself – it is non-periodic and exhibits sensitive dependence on initial conditions, so it is said to be chaotic.

The solution of the logistic map when r=2 is

for any value of

other than the unstable fixed point 0, the term

goes to 0 as n goes to infinity, so

goes to the stable fixed point

Template:See A bivariate quadratic function is a second-degree polynomial of the form

where A, B, C, D, and E are fixed coefficients and F is the constant term. Such a function describes a quadratic surface. Setting

, which is a locus of points equivalent to a conic section.

the function has no maximum or minimum, its graph forms an hyperbolic paraboloid.

the function has a minimum if A>0, and a maximum if A<0, its graph forms an elliptic paraboloid. In this case the minimum or maximum occurs at

the function has no maximum or minimum, its graph forms a parabolic cylinder.

the function achieves the maximum/minimum at a line. Similarly, a minimum if A>0 and a maximum if A<0, its graph forms a parabolic cylinder.