An important physical scenario in which a quantum stochastic calculus is needed is the case of a system interacting with a heat bath. It is appropriate in many circumstances to model the heat bath as an assembly of harmonic oscillators. One type of interaction between the system and the bath can be modeled (after making a canonical transformation) by the following Hamiltonian:[3]:42, 45

is the system Hamiltonian,

is a vector containing the system variables corresponding to a finite number of degrees of freedom,

is an index for the different bath modes,

is the frequency of a particular mode,

are bath operators for a particular mode,

is a system operator, and

quantifies the coupling between the system and a particular bath mode.

is called the quantum Langevin equation and may be written as:[3]:46–47

denote the commutator and anticommutator (respectively), the memory function

and the time dependent noise operator

where the bath annihilation operator

Oftentimes this equation is more general than is needed, and further approximations are made to simplify the equation.

For many purposes it is convenient to make approximations about the nature of the heat bath in order to achieve a white noise formalism. In such a case the interaction may be modeled by the Hamiltonian

are annihilation operators for the bath with the commutation relation

is an operator on the system,

quantifies the strength of the coupling of the bath modes to the system, and

describes the free system evolution.[3]:148 This model uses the rotating wave approximation and extends the lower limit of

in order to admit a mathematically simple white noise formalism. The coupling strengths are also usually simplified to a constant in what is sometimes called the first Markov approximation:[4]:3763

Systems coupled to a bath of harmonic oscillators can be thought of as being driven by a noise input and radiating a noise output.[3]:43 The input noise operator at time

, since this operator is expressed in the Heisenberg picture. Satisfaction of the commutation relation

allows the model to have a strict correspondence with a Markovian master equation.[2]:142

In the white noise setting described so far, the quantum Langevin equation for an arbitrary system operator

For the case most closely corresponding to classical white noise, the input to the system is described by a density operator giving the following expectation value:[3]:154

In order to define quantum stochastic integration, it is important to define a quantum Wiener process:[3]:155[4]:3765

This definition gives the quantum Wiener process the commutation relation

. The property of the bath annihilation operators in (Template:EquationNote) implies that the quantum Wiener process has an expectation value of:

The quantum Wiener processes are also specified such that their quasiprobability distributions are Gaussian by defining the density operator:

The stochastic evolution of system operators can also be defined in terms of the stochastic integration of given equations.

The quantum Itō integral of a system operator

commute with the system operator.

In order to define the Itō QSDE, it is necessary to know something about the bath statistics.[3]:159 In the context of the white noise formalism described earlier, the Itō QSDE can be defined as:[3]:156

where the equation has been simplified using the Lindblad superoperator:[2]:105

This differential equation is interpreted as defining the system operator

as the quantum Itō integral of the right hand side, and is equivalent to the Langevin equation (Template:EquationNote).[4]:3765

The quantum Stratonovich integral of a system operator

where the bold (S) preceding the integral stands for Stratonovich. Unlike the Itō formulation, the increments in the Stratonovich integral do not commute with the system operator, and it can be shown that:[3]

The Stratonovich QSDE can be defined as:[3]:158

This differential equation is interpreted as defining the system operator

as the quantum Stratonovich integral of the right hand side, and is in the same form as the Langevin equation (Template:EquationNote).[4]:3766–3767

Relation between Itō and Stratonovich integrals

The two definitions of quantum stochastic integrals relate to one another in the following way, assuming a bath with

Just as with classical stochastic calculus, the appropriate product rule can be derived for Itō and Stratonovich integration, respectively:[3]:156, 159

Quantum trajectories can generally be thought of as the path through Hilbert space that the state of a quantum system traverses over time. In a stochastic setting, these trajectories are often conditioned upon measurement results. The unconditioned Markovian evolution of a quantum system (averaged over all possible measurement outcomes) is given by a Lindblad equation. In order to describe the conditioned evolution in these cases, it is necessary to unravel the Lindblad equation by choosing a consistent QSDE. In the case where the conditioned system state is always pure, the unraveling could be in the form of a stochastic Schrödinger equation (SSE). If the state may become mixed, then it is necessary to use a stochastic master equation (SME).[2]:148 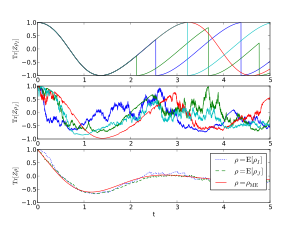 Plot of the evolution of the z-component of the Bloch vector of a two-level atom coupled to the electromagnetic field undergoing damped Rabi oscillations. The top plot shows the quantum trajectory for the atom for photon-counting measurements performed on the electromagnetic field, the middle plot shows the same for homodyne detection, and the bottom plot compares the previous two measurement choices (each averaged over 32 trajectories) with the unconditioned evolution given by the master equation.

Consider the following Lindblad master equation for a system interacting with a vacuum bath:[2]:145

is the photocount, indicating how many photons have been detected at time

denotes the expected value. Another type of measurement that could be made on the bath is homodyne detection, which results in quantum trajectories given by the following SME:

is a Wiener increment satisfying:[2]:161

Although these two SMEs look wildly different, calculating their expected evolution shows that they are both indeed unravelings of the same Lindlad master equation:

One important application of quanum trajectories is reducing the computational resources required to simulate a master equation. For a Hilbert space of dimension d, the amount of real numbers required to store the density matrix is of order d2, and the time required to compute the master equation evolution is of order d4. Storing the state vector for a SSE, on the other hand, only requires an amount of real numbers of order d, and the time to compute trajectory evolution is only of order d2. The master equation evolution can then be approximated by averaging over many individual trajectories simulated using the SSE, a technique sometimes referred to as the Monte Carlo wave-function approach.[5] Although the number of calculated trajectories n must be very large in order to accurately approximate the master equation, good results can be obtained for trajectory counts much less than d2. Not only does this technique yield faster computation time, but it also allows for the simulation of master equations on machines that do not have enough memory to store the entire density matrix.[2]:153