{{ safesubst:#invoke:Unsubst||$N=Merge to |date=__DATE__ |$B= Template:MboxTemplate:DMCTemplate:Merge partner }} In data structures a range query consists of preprocessing some input data into a data structure to efficiently answer any number of queries on any subset of the input. Particularly, there is a group of problems that have been extensively studied where the input is an array of unsorted numbers and a query consists in computing some function on a specific range of the array. In this article we describe some of these problems together with their solutions.

Statement Of The Problem

We may state the problem of range queries in the following way: a range query

of n elements of some set

defined over arrays of elements of

. This should be done space and time efficient.

and array of numbers, the range query

. These queries may be answered in constant time and using

extra space by calculating the sums of the first

and storing them into an auxiliar array

contains the sum of the first

This strategy may be extended for every group operator

where the notion of

is well defined and easily computable.[1] Finally notice this solution might be extended for arrays of dimension two with a similar preprocessing.[2] 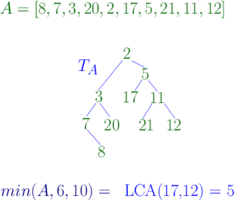 is not always defined, therefore we can not use an analogous strategy to the previous section. Yao showed[3] that there exists an efficient solution for range queries that involve semigroup operators. He proved that for any constant

, a preprocessing of time and space

allows to answer range queries on lists where

is a semigroup operator in

is a certain functional inverse of the Ackermann function.

There are some semigroup operators that admit slightly better solutions. For instance when

returns the index of the minimum element of

denotes the corresponding minimum range query. There are several data structures that allow to answer a range minimum query in

time using a preprocessing of time and space

. Probably the simplest solution to sketch here is based on the equivalence between this problem and the Lowest Common Ancestor Problem. We briefly describe this solution.

and the cartesian tree of

respectively. It is easy to see that a range minimum query

is the lowest common ancestor in

. Since the lowest common ancestor is solvable in constant time using a preprocessing of time and space

thus so does the range minimum query problem. The solution when f = max is analogous. Cartesian trees can be constructed in linear time.

The mode of an array A is the element that appears the most in A. For instance the mode of

is 4. In case of ties any of the most frequent elements might be picked as mode. A range mode query consists in preprocessing

such that we can find the mode in any range of

. Several data structures have been devised to solve this problem, we summarize some of the results in the following table.[1]

for any data structure that uses

This particular case is of special interest since finding the median has several applications, for further reference see.[5] On the other hand, the median problem, a special case of the selection problem, is solvable in O(n), by the median of medians algorithm.[6] However its generalization through range median queries is recent.[7] A range median query

where A,i and j have the usual meanings returns the median element of

should return the element of

. Note that range median queries can not be solved by following any of the previous methods discussed above including Yao's approach for semigroup operators.[8]

There have been studied two variants of this problem, the offline version, where all the k queries of interest are given in a batch and we are interested in reduce the total cost and a version where all the preprocessing is done up front and we are interested in optimize the cost of any subsequent single query. Concerning the first variant of the problem recently was proven that can be solved in time

an unsorted array of distinct elements, to find the range medians we set

Procedure rangeMedian partitions A, using A's median, into two arrays A.low and A.high, where the former contains the elements of A that are less than or equal to the median m and the latter the rest of the elements of A. If we know that the number of elements of

, it is enough to find the maximum index

is in A.low and the maximum index

. The total cost for any query, without considering the partitioning part, is

fractional cascading should be used). If a linear algorithm to find the medians is used, the total cost of preprocessing for

. Clearly this algorithm can be easily modified to solve the up front version of the problem.[7]

All the problems described above have been studied for higher dimensions as well as their dynamic versions. On the other hand, range queries might be extended to other data structures like trees,[8] such as the level ancestor problem. A similar family of problems are orthogonal range queries also known as counting queries.