In mathematics, the ratio test is a test (or "criterion") for the convergence of a series

, where each term is a real or complex number and

is nonzero when n is large. The test was first published by Jean le Rond d'Alembert and is sometimes known as d'Alembert's ratio test or as the Cauchy ratio test.[1]

Given the following geometric series:

As m increases, this converges to 1, so the sum of the series is 1. On the other hand given this geometric series:

which increases without bound as m increases, so this series diverges. More generally, the sum of the first m terms of the geometric series

Whether this converges or diverges as m increases depends on whether r, the quotient of any two adjacent terms, is less than or greater than 1. Now consider the series:

This is similar to the first convergent sequence above, except that now the ratio of two terms is not fixed at exactly 1/2:

However, as n increases, the ratio still tends in the limit towards the same constant 1/2. The ratio test generalizes the simple test for geometric series to more complex series like this one where the quotient of two terms is not fixed, but in the limit tends towards a fixed value. The rules are similar: if the quotient approaches a value less than one, the series converges, whereas if it approaches a value greater than one, the series diverges.

The usual form of the test makes use of the limit Template:NumBlk The ratio test states that:

It is possible to make the ratio test applicable to certain cases where the limit L fails to exist, if limit superior and limit inferior are used. The test criteria can also be refined so that the test is sometimes conclusive even when L = 1. More specifically, let

If the limit L in (Template:EquationNote) exists, we must have L=R=r. So the original ratio test is a weaker version of the refined one.

Putting this into the ratio test:

Putting this into the ratio test:

of the three series are respectively 1,

. This illustrates that when L=1, the series may converge or diverge and hence the original ratio test is inconclusive. For the first series

, however, as the term-by-term magnitude ratio

for all n, we can apply the third criterion in the refined version of the ratio test to conclude that the series diverges. 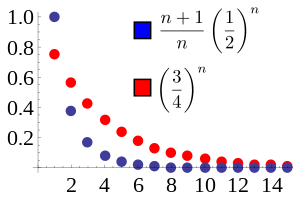 Below is a proof of the validity of the original ratio test.

. We can then show that the series converges absolutely by showing that its terms will eventually become less than those of a certain convergent geometric series. To do this, let

. Then r is strictly between L and 1, and

That is, the series converges absolutely.

for sufficiently large n, so that the limit of the summands is non-zero. Hence the series diverges.

As seen in the previous example, the ratio test may be inconclusive when the limit of the ratio is 1. Extensions to ratio test, however, sometimes allows one to deal with this case. For instance, the aforementioned refined version of the test handles the case

. Below are some other extensions.

This extension is due to Joseph Ludwig Raabe. It states that if

The next cases in de Morgan's hierarchy are Bertrand's and Gauss's test. Each test involves slightly different higher order asymptotics. If

These are both special cases of Kummer's test for the convergence of the series Σan. Let ζn be an auxiliary sequence of positive constants. Let

Then if ρ > 0, the series converges. If ρ < 0 and Σ1/ζn diverges, then the series diverges. Otherwise the test is inconclusive.[8]