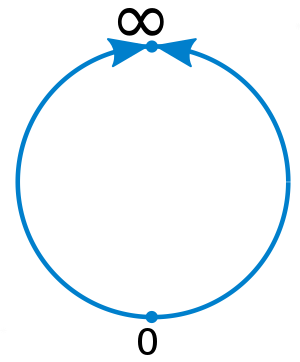 The real projective line can be thought of as a line whose endpoints meet at infinity.

In projective geometry and real analysis, the real projective line (also called the one-point compactification of the real line, or the projectively extended real numbers), is the set

represents the point at infinity, an idealized point that bridges the two "ends" of the real line.

Unlike most mathematical models of the intuitive concept of 'number', this structure allows division by zero:

for nonzero a. This structure, however, is not a field, and division does not retain its original algebraic meaning in it. The geometric interpretation is this: a vertical line has infinite slope.

Extensions of the real line

Compare the extended real number line (also called the two-point compactification of the real line), which does distinguish between

The order relation cannot be extended to

in a meaningful way. Given a real number a, there is no convincing reason to decide that

can't be compared with any of the other elements, there's no point in using this relation at all. However, order is used to make definitions in

that are based on the properties of reals.

The terminology projective line is appropriate, because the points are in 1-to-1 correspondence with one-dimensional linear subspaces of R2.

The arithmetic operations in this space are an extension of the same operations on reals. The motivation for the new definitions is the limits of functions of real numbers.

Arithmetic operations which are defined

Arithmetic operations which are left undefined

The following cannot be motivated by considering limits of real functions, and any definition of them would require us to give up additional algebraic properties. Therefore, they are left undefined:

The following is true whenever the right-hand side is defined, for any

In general, all laws of arithmetic are valid as long as all the occurring expressions are defined.

The concept of an interval can be extended to

. However, since it is an unordered set, the interval has a slightly different meaning. The definitions for closed intervals are as follows (it is assumed that

The corresponding open and half-open intervals are obtained by removing the endpoints.

itself is also an interval, but cannot be represented with this bracket notation.

The open intervals as base define a topology on

. Sufficient for a base are the finite open intervals and the intervals

Interval arithmetic is trickier in

. However, the result of an arithmetic operation on intervals is always an interval. In particular, we have, for every

which is true even when the intervals involved include 0.

The tools of calculus can be used to analyze functions of

. The definitions are motivated by the topology of this space.

The limit of f(x) as x approaches p is L, denoted

The one-sided limit of f(x) as x approaches p from the right (left) is L, denoted

It can be shown that

if and only if both

Comparison with limits in

The definitions given above can be compared with the usual definitions of limits of real functions. In the following statements,

, the first limit is as defined above, and the second limit is in the usual sense:

. Then p is a limit point of A if and only if every neighbourhood of p includes a point

, p a limit point of A. The limit of f(x) as x approaches p through A is L, if and only if for every neighbourhood B of L, there is a punctured neighbourhood C of p, such that

This corresponds to the regular topological definition of continuity, applied to the subspace topology on

, and the restriction of f to

f is continuous at p if and only if f is defined at p and:

f is continuous in A if and only if for every

An interesting feature is that every rational function P(x)/Q(x), where P(x) and Q(x) have no common factor, is continuous in

. Also, If tan is extended so that

then tan is continuous in

. However, many elementary functions, such as trigonometric and exponential functions, are discontinuous at

. For example, sin is continuous in

Thus 1/x is continuous on

but not on the affinely extended real number system R. Conversely, the function arctan can be extended continuously on R, but not on