The Riemann–Roch theorem is an important tool in mathematics, specifically in complex analysis and algebraic geometry, for the computation of the dimension of the space of meromorphic functions with prescribed zeroes and allowed poles. It relates the complex analysis of a connected compact Riemann surface with the surface's purely topological genus g, in a way that can be carried over into purely algebraic settings.

Initially proved as Riemann's inequality by Template:Harvtxt, the theorem reached its definitive form for Riemann surfaces after work of Riemann's short-lived student Template:Harvs. It was later generalized to algebraic curves, to higher-dimensional varieties and beyond. 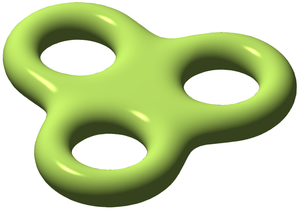 A Riemann surface of genus 3.

A Riemann surface X is a topological space that is locally homeomorphic to an open subset of C, the set of complex numbers. In addition, the transition maps between these open subsets are required to be holomorphic. The latter condition allows to transfer the notions and methods of complex analysis dealing with holo- and meromorphic functions on C to the surface X. For the purposes of the Riemann–Roch theorem, the surface X is always assumed to be compact. Colloquially speaking, the genus g of a Riemann surface is its number of handles; for example the genus of the Riemann surface shown at the right is three. More precisely, the genus defined as half of the first Betti number, i.e., half of the C-dimension of the first singular homology group H1(X, C) with complex coefficients. The genus classifies compact Riemann surfaces up to homeomorphism, i.e., two such surfaces are homeomorphic (but not necessarily diffeomorphic) if and only if their genus is the same. Therefore, the genus is an important topological invariant of a Riemann surface. On the other hand, Hodge theory shows that the genus coincides with the (C-)dimension of the space of holomorphic one-forms on X, so the genus also encodes complex-analytic information about the Riemann surface.[1]

where R(f) is the set of all zeroes and poles of f, and sν is given by

The symbol deg(D) denotes the degree (occasionally also called index) of the divisor D, i.e. the sum of the coefficients occurring in D. It can be shown that the divisor of a global meromorphic function always has degree 0, so the degree of the divisor depends only on the linear equivalence class.

Typically, the number l(D) is the one of interest, while l(K − D) is thought of as a correction term (also called index of speciality[2][3]) so the theorem may be roughly paraphrased by saying

The correction term l(K − D) is always non-negative, so that

This is called Riemann's inequality. Roch's part of the statement is the description of the possible difference between the sides of the inequality. On a general Riemann surface of genus g, K has degree 2g − 2, independently of the meromorphic form chosen to represent the divisor. This follows from putting D = 0 in the theorem. In particular, as long as D has degree at least 2g − 1, the correction term is 0, so that

The theorem will now be illustrated for surfaces of low genus. There are also a number other closely related theorems: an equivalent formulation of this theorem using line bundles and a generalization of the theorem to algebraic curves.

i.e., the dimension of the space of functions that are holomorphic everywhere except at P where the function is allowed to have a pole of order at most n. For n = 0, the functions are thus required to be entire, i.e., holomorphic on the whole surface X. By Liouville's theorem, such a function is necessarily constant. Therefore l(0) = 1. In general, the sequence l(n · P) is an increasing sequence.

The Riemann sphere (also called complex projective line) is simply-connected and hence its first singular homology is zero. In particular its genus is zero. The sphere can be covered by two copies of C, with transition map being given by

Therefore the form ω = dz on one copy of C extends to a meromorphic form on the Riemann sphere: it has a double pole at infinity, since

Therefore, the theorem says that the sequence l(n · P) reads

This sequence can also be read off from the theory of partial fractions. Conversely if this sequence starts this way, then g must be zero. 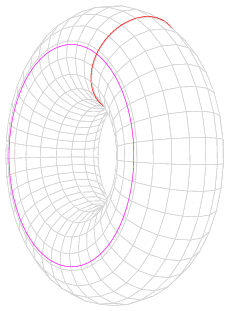 The next case is a Riemann surface of genus g = 1, such as a torus C / Λ, where Λ is a two-dimensional lattice (a group isomorphic to Z2). Its genus is one: its first singular homology group is freely generated by two loops, as shown in the illustration at the right. The standard complex coordinate z on C yields a one-form ω = dz on X that is everywhere holomorphic, i.e., has no poles at all. Therefore, K, the divisor of ω is zero.

On this surface, this sequence is

Genus two and beyond

For g = 2, the sequence mentioned above is

It is shown from this that the ? term of degree 2 is either 1 or 2, depending on the point. It can be proven that in any genus 2 curve there are exactly six points whose sequences are 1, 1, 2, 2, ... and the rest of the points have the generic sequence 1, 1, 1, 2, ... In particular, a genus 2 curve is a hyperelliptic curve. For g > 2 it is always true that at most points the sequence starts with g+1 ones and there are finitely many points with other sequences (see Weierstrass points).

denote the space of holomorphic sections of L. This space will be finite-dimensional; its dimension is denoted

. Let K denote the canonical bundle on X. Then, the Riemann–Roch theorem states that

The theorem of the previous section is the special case of when L is a point bundle. The theorem can be applied to show that there are g holomorphic sections of K, or one-forms, on X. Taking L to be the trivial bundle,

since the only holomorphic functions on X are constants. The degree of L is zero, and

is the trivial bundle. Thus,

, proving that there are g holomorphic one-forms.

i.e., as the dimension of the space of globally defined (algebraic) one-forms (see Kähler differential). Finally, meromorphic functions on a Riemann surface are locally represented as fractions of holomorphic functions. Hence they are replaced by rational functions which are locally fractions of regular functions. Thus, writing l(D) for the dimension (over k) of the space of rational functions on the curve whose poles at every point are not worse than the corresponding coefficient in D, the very same formula as above holds:

where C is a projective non-singular algebraic curve over an algebraically closed field k. In fact, the same formula holds for projective curves over any field, except that the degree of a divisor needs to take into account multiplicities coming from the possible extensions of the base field and the residue fields of the points supporting the divisor.[4] Finally, for a proper curve over an Artinian ring, the Euler characteristic of the line bundle associated to a divisor is given by the degree of the divisor (appropriately defined) plus the Euler characteristic of the structural sheaf

The smoothness assumption in the theorem can be relaxed, as well: for a (projective) curve over an algebraically closed field, all of whose local rings are Gorenstein rings, the same statement as above holds, provided that the geometric genus as defined above is replaced by the arithmetic genus ga, defined as

(For smooth curves, the geometric genus agrees with the arithmetic one.) The theorem has also been extended to general singular curves (and higher-dimensional varieties).[7]

The statement for algebraic curves can be proved using Serre duality. The integer I(D) is the dimension of the space of global sections of the line bundle

associated to D (cf. Cartier divisor). In terms of sheaf cohomology, we therefore have

. But Serre duality for non-singular projective varieties in the particular case of a curve states that

is isomorphic to the dual

by definition. To prove the theorem for general divisor, one can then proceed by adding points one by one to the divisor and taking some off and ensure that the Euler characteristic transforms accordingly to the right hand side.

The Riemann–Hurwitz formula concerning (ramified) maps between Riemann surfaces or algebraic curves is a consequence of the Riemann–Roch theorem.

Clifford's theorem on special divisors is also a consequence of the Riemann–Roch theorem. It states that for a special divisor (i.e., such that l(K − D) > 0) satisfying l(D) > 0, the following inequality holds:[8]

Generalizations of the Riemann-Roch Theorem

The Riemann–Roch theorem for curves was proved for Riemann surfaces by Riemann and Roch in the 1850s and for algebraic curves by Friedrich Karl Schmidt in 1931 as he was working on perfect fields of finite characteristic. Under the hand of Peter Roquette :

The first main achievement of F. K. Schmidt is the discovery that the classical theorem of Riemann-Roch on compact Riemann surfaces can be transferred to function fields with finite base field. Actually, his proof of the Riemann-Roch theorem works for arbitrary perfect base fields, not necessarily finite.

It is foundational in the sense that the subsequent theory for curves tries to refine the information it yields (for example in the Brill–Noether theory).

There are versions in higher dimensions (for the appropriate notion of divisor, or line bundle). Their general formulation depends on splitting the theorem into two parts. One, which would now be called Serre duality, interprets the l(K − D) term as a dimension of a first sheaf cohomology group; with l(D) the dimension of a zeroth cohomology group, or space of sections, the left-hand side of the theorem becomes an Euler characteristic, and the right-hand side a computation of it as a degree corrected according to the topology of the Riemann surface.

In algebraic geometry of dimension two such a formula was found by the geometers of the Italian school; a Riemann–Roch theorem for surfaces was proved (there are several versions, with the first possibly being due to Max Noether). So matters rested before about 1950.

An n-dimensional generalisation, the Hirzebruch–Riemann–Roch theorem, was found and proved by Friedrich Hirzebruch, as an application of characteristic classes in algebraic topology; he was much influenced by the work of Kunihiko Kodaira. At about the same time Jean-Pierre Serre was giving the general form of Serre duality, as we now know it.

Alexander Grothendieck proved a far-reaching generalization in 1957, now known as the Grothendieck–Riemann–Roch theorem. His work reinterprets Riemann–Roch not as a theorem about a variety, but about a morphism between two varieties. The details of the proofs were published by Borel-Serre in 1958.

Finally a general version was found in algebraic topology, too. These developments were essentially all carried out between 1950 and 1960. After that the Atiyah–Singer index theorem opened another route to generalization.

What results is that the Euler characteristic (of a coherent sheaf) is something reasonably computable. If one is interested, as is usually the case, in just one summand within the alternating sum, further arguments such as vanishing theorems must be brought to bear.