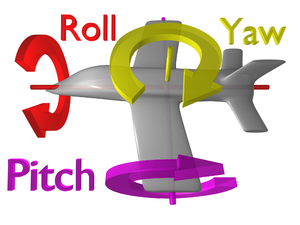 The position of a rigid body is determined by the position of its center of mass and by its attitude (at least six parameters in total).[1]

In physics, a rigid body is an idealization of a solid body in which deformation is neglected. In other words, the distance between any two given points of a rigid body remains constant in time regardless of external forces exerted on it. Even though such an object cannot physically exist due to relativity, objects can normally be assumed to be perfectly rigid if they are not moving near the speed of light.

The linear position can be represented by a vector with its tail at an arbitrary reference point in space (the origin of a chosen coordinate system) and its tip at an arbitrary point of interest on the rigid body, typically coinciding with its center of mass or centroid. This reference point may define the origin of a coordinate system fixed to the body.

There are several ways to numerically describe the orientation of a rigid body, including a set of three Euler angles, a quaternion, or a direction cosine matrix (also referred to as a rotation matrix). All these methods actually define the orientation of a basis set (or coordinate system) which has a fixed orientation relative to the body (i.e. rotates together with the body), relative to another basis set (or coordinate system), from which the motion of the rigid body is observed. For instance, a basis set with fixed orientation relative to an airplane can be defined as a set of three orthogonal unit vectors b1, b2, b3, such that b1 is parallel to the chord line of the wing and directed forward, b2 is normal to the plane of symmetry and directed rightward, and b3 is given by the cross product

Velocity (also called linear velocity) and angular velocity are measured with respect to a frame of reference.

In this case, rigid bodies and reference frames are indistinguishable and completely interchangeable.

The velocity of point P in reference frame N is defined using the time derivative in N of the position vector from O to P:[5]

The acceleration of point P in reference frame N is defined using the time derivative in N of its velocity:[5]

Velocity of two points fixed on a rigid body

For two points P and Q that are fixed on a rigid body B, where B has an angular velocity

Acceleration of two points fixed on a rigid body

is the angular acceleration of B in the reference frame N.[6]

As mentioned above, all points on a rigid body B have the same angular velocity

in a fixed reference frame N, and thus the same angular acceleration

Velocity of one point moving on a rigid body

If the point R is moving in rigid body B while B moves in reference frame N, then the velocity of R in N is

where Q is the point fixed in B that is instantaneously coincident with R at the instant of interest.[7] This relation is often combined with the relation for the Velocity of two points fixed on a rigid body.

Acceleration of one point moving on a rigid body

where Q is the point fixed in B that instantaneously coincident with R at the instant of interest.[7] This equation is often combined with Acceleration of two points fixed on a rigid body.

If C is the origin of a local coordinate system L, attached to the body,

Vehicles, walking people, etc., usually rotate according to changes in the direction of the velocity: they move forward with respect to their own orientation. Then, if the body follows a closed orbit in a plane, the angular velocity integrated over a time interval in which the orbit is completed once, is an integer times 360°. This integer is the winding number with respect to the origin of the velocity. Compare the amount of rotation associated with the vertices of a polygon.

Any point that is rigidly connected to the body can be used as reference point (origin of coordinate system L) to describe the linear motion of the body (the linear position, velocity and acceleration vectors depend on the choice).

However, depending on the application, a convenient choice may be:

When the center of mass is used as reference point:

Two rigid bodies are said to be different (not copies) if there is no proper rotation from one to the other. A rigid body is called chiral if its mirror image is different in that sense, i.e., if it has either no symmetry or its symmetry group contains only proper rotations. In the opposite case an object is called achiral: the mirror image is a copy, not a different object. Such an object may have a symmetry plane, but not necessarily: there may also be a plane of reflection with respect to which the image of the object is a rotated version. The latter applies for S2n, of which the case n = 1 is inversion symmetry.

For a (rigid) rectangular transparent sheet, inversion symmetry corresponds to having on one side an image without rotational symmetry and on the other side an image such that what shines through is the image at the top side, upside down. We can distinguish two cases:

A sheet with a through and through image is achiral. We can distinguish again two cases:

|CitationClass=book }} This reference effectively combines screw theory with rigid body dynamics for robotic applications. The author also chooses to use spatial accelerations extensively in place of material accelerations as they simplify the equations and allow for compact notation.