An animation of the Roman Surface

The Roman surface or Steiner surface (so called because Jakob Steiner was in Rome when he thought of it) is a self-intersecting mapping of the real projective plane into three-dimensional space, with an unusually high degree of symmetry. This mapping is not an immersion of the projective plane; however, the figure resulting from removing six singular points is one.

The simplest construction is as the image of a sphere centered at the origin under the map f(x,y,z) = (yz,xz,xy). This gives an implicit formula of

Also, taking a parametrization of the sphere in terms of longitude (θ) and latitude (φ), gives parametric equations for the Roman surface as follows:

The origin is a triple point, and each of the xy-, yz-, and xz-planes are tangential to the surface there. The other places of self-intersection are double points, defining segments along each coordinate axis which terminate in six pinch points. The entire surface has tetrahedral symmetry. It is a particular type (called type 1) of Steiner surface, that is, a 3-dimensional linear projection of the Veronese surface.

For simplicity we consider only the case r = 1. Given the sphere defined by the points (x, y, z) such that

we apply to these points the transformation T defined by

But then we have

Conversely, suppose we are given (U, V, W) satisfying

We prove that there exists (x,y,z) such that

with one exception: In case 3.b. below, we show this cannot be proved.

(Note that (*) guarantees that either all three of U, V, W are positive, or else exactly two are negative. So these square roots are of positive numbers.)

and hence at least one of U, V must be 0 also. This shows that is it impossible for exactly one of U, V, W to be 0.

3. Suppose that exactly two of U, V, W are 0. Without loss of generality we assume

a. In the subcase where

if we determine x and y by

this ensures that (*) holds. It is easy to verify that

this shows that this subcase leads to the desired converse.

b. In this remaining subcase of the case 3., we have

it is easy to check that

and thus in this case, where

(each of which is a noncompact portion of a coordinate axis, in two pieces) do not correspond to any point on the Roman surface.

This covers all possible cases.

Let a sphere have radius r, longitude φ, and latitude θ. Then its parametric equations are

Then, applying transformation T to all the points on this sphere yields

Relation to the real projective plane

The sphere, before being transformed, is not homeomorphic to the real projective plane, RP2. But the sphere centered at the origin has this property, that if point (x,y,z) belongs to the sphere, then so does the antipodal point (-x,-y,-z) and these two points are different: they lie on opposite sides of the center of the sphere.

The transformation T converts both of these antipodal points into the same point,

Since this is true of all points of S2, then it is clear that the Roman surface is a continuous image of a "sphere modulo antipodes". Because some distinct pairs of antipodes are all taken to identical points in the Roman surface, it is not homeomorphic to RP2, but is instead a quotient of the real projective plane RP2 = S2 / (x~-x). Furthermore, the map T (above) from S2 to this quotient has the special property that it is locally injective away from six pairs of antipodal points. Or from RP2 the resulting map making this an immersion of RP2 — minus six points — into 3-space.

Structure of the Roman surface

The Roman surface has four bulbous "lobes", each one on a different corner of a tetrahedron.

A Roman surface can be constructed by splicing together three hyperbolic paraboloids and then smoothing out the edges as necessary so that it will fit a desired shape (e.g. parametrization).

Let there be these three hyperbolic paraboloids:

For example, given x = yz and y = zx, the second paraboloid is equivalent to x = y/z. Then

Likewise, the other external intersections are

Let us see the pieces being put together. Join the paraboloids y = xz and x = yz. The result is shown in Figure 1. 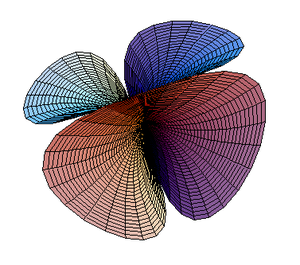 The two paraboloids together look like a pair of orchids joined back-to-back.

Now run the third hyperbolic paraboloid, z = xy, through them. The result is shown in Figure 2. 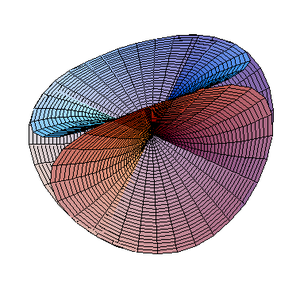 On the west-southwest and east-northeast directions in Figure 2 there are a pair of openings. These openings are lobes and need to be closed up. When the openings are closed up, the result is the Roman surface shown in Figure 3.

A pair of lobes can be seen in the West and East directions of Figure 3. Another pair of lobes are hidden underneath the third (z = xy) paraboloid and lie in the North and South directions.

If the three intersecting hyperbolic paraboloids are drawn far enough that they intersect along the edges of a tetrahedron, then the result is as shown in Figure 4.

One of the lobes is seen frontally—head on—in Figure 4. The lobe can be seen to be one of the four corners of the tetrahedron. 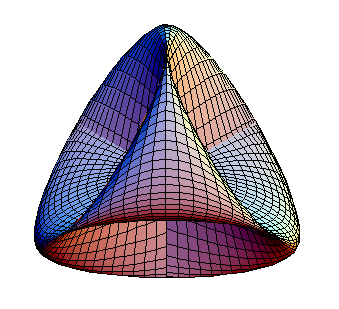 One of the lobes of the Roman surface is seen frontally in Figure 5, and its bulbous – balloon-like—shape is evident.

If the surface in Figure 5 is turned around 180 degrees and then turned upside down, the result is as shown in Figure 6.

Figure 6 shows three lobes seen sideways. Between each pair of lobes there is a locus of double points corresponding to a coordinate axis. The three loci intersect at a triple point at the origin. The fourth lobe is hidden and points in the direction directly opposite from the viewer. The Roman surface shown at the top of this article also has three lobes in sideways view.

The Roman surface is non-orientable, i.e. one-sided. This is not quite obvious. To see this, look again at Figure 3.

Imagine an ant on top of the "third" hyperbolic paraboloid, z = x y. Let this ant move North. As it moves, it will pass through the other two paraboloids, like a ghost passing through a wall. These other paraboloids only seem like obstacles due to the self-intersecting nature of the immersion. Let the ant ignore all double and triple points and pass right through them. So the ant moves to the North and falls off the edge of the world, so to speak. It now finds itself on the northern lobe, hidden underneath the third paraboloid of Figure 3. The ant is standing upside-down, on the "outside" of the Roman surface.

Let the ant move towards the Southwest. It will climb a slope (upside-down) until it finds itself "inside" the Western lobe. Now let the ant move in a Southeastern direction along the inside of the Western lobe towards the z = 0 axis, always above the x-y plane. As soon as it passes through the z = 0 axis the ant will be on the "outside" of the Eastern lobe, standing rightside-up.

Then let it move Northwards, over "the hill", then towards the Northwest so that it starts sliding down towards the x = 0 axis. As soon as the ant crosses this axis it will find itself "inside" the Northern lobe, standing right side up. Now let the ant walk towards the North. It will climb up the wall, then along the "roof" of the Northern lobe. The ant is back on the third hyperbolic paraboloid, but this time under it and standing upside-down. (Compare with Klein bottle.)

If the Roman surface were to be inscribed inside the tetrahedron with least possible volume, one would find that each edge of the tetrahedron is tangent to the Roman surface at a point, and that each of these six points happens to be a Whitney singularity. These singularities, or pinching points, all lie at the edges of the three lines of double points, and they are defined by this property: that there is no plane tangent to surface at the singularity.