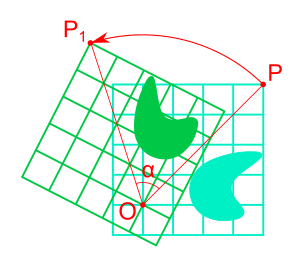 Rotation of an object in two dimensions around a point Template:Mvar.

Rotation in mathematics is a concept originating in geometry. Any rotation is a motion of a certain space that preserves at least one point. It can describe, for example, the motion of a rigid body around a fixed point. A rotation is different from other types of motions: translations, which have no fixed points, and (hyperplane) reflections, each of them having an entire (n − 1)-dimensional flat of fixed points in a Template:Mvar-dimensional space.

Mathematically, a rotation is a map. All rotations about a fixed point form a group under composition called the rotation group (of a particular space). But in mechanics and, more generally, in physics, this concept is frequently understood as a coordinate transformation (importantly, a transformation of an orthonormal basis), because for any motion of a body there is an inverse transformation which if applied to the frame of reference results in the body being at the same coordinates. For example in two dimensions rotating a body clockwise about a point keeping the axes fixed is equivalent to rotating the axes counterclockwise about the same point while the body is kept fixed. These two types of rotation are called active and passive transformations.

For a particular rotation:

A representation of rotations is a particular formalism, either algebraic or geometric, used to parametrize a rotation map. This meaning is somehow inverse to the meaning in the group theory.

Rotations of (affine) spaces of points and of respective vector spaces are not always clearly distinguished. The former are sometimes referred to as affine rotations (although the term is misleading), whereas the latter are vector rotations. See the article below for details.

A motion of a Euclidean space is the same as its isometry: it leaves the distance between any two points unchanged after the transformation. But a (proper) rotation also has to preserve the orientation structure. The "improper rotation" term refers to isometries that reverse (flip) the orientation. In the language of group theory the distinction is expressed as direct vs indirect isometries in the Euclidean group, where the former comprise the identity component. Any direct Euclidean motion can be represented as a composition of a rotation about the fixed point and a translation.

There are no non-trivial rotations in one dimension. In two dimensions, only a single angle is needed to specify a rotation about the origin – the angle of rotation that specifies an element of the circle group (also known as U(1)). The rotation is acting to rotate an object counterclockwise through an angle Template:Mvar about the origin; see below for details. Composition of rotations about different sums their angles modulo 1 turn, that implies that all two-dimensional rotations about the same point commute. Rotations about different points, in general, do not commute. Any two-dimensional direct motion is either a translation or a rotation; see Euclidean plane isometry for details. 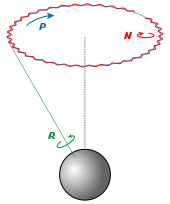 A three-dimensional rotation can be specified in a number of ways. The most usual methods are:

An orthogonal projection onto three-dimensions of a tesseract being rotated in four-dimensional Euclidean space.

A general rotation in four dimensions has only one fixed point, the centre of rotation, and no axis of rotation; see rotations in 4-dimensional Euclidean space for details. Instead the rotation has two mutually orthogonal planes of rotation, each of which is fixed in the sense that points in each plane stay within the planes. The rotation has two angles of rotation, one for each plane of rotation, through which points in the planes rotate. If these are ω1 and ω2 then all points not in the planes rotate through an angle between ω1 and ω2. Rotations in four dimensions about a fixed point have six degrees of freedom. A four-dimensional direct motion in general position is a rotation about certain point (as in all even Euclidean dimensions), but screw operations exist also.

{{#invoke:main|main}} When one considers motions of the Euclidean space that preserve the origin, the distinction between points and vectors, important in pure mathematics, can be erased because there is a canonical one-to-one correspondence between points and position vectors. The same is true for geometries other than Euclidean, but whose space is an affine space with a supplementary structure; see an example below. Alternatively, the vector description of rotations can be understood as a parametrization of geometric rotations up to their composition with translations. In other words, one vector rotation presents many equivalent rotations about all points in the space.

As it was already stated, a (proper) rotation is different from an arbitrary fixed-point motion in its preservation of the orientation of the vector space. Thus, the determinant of a rotation orthogonal matrix must be 1. The only other possibility for the determinant of an orthogonal matrix is −1, and this result means the transformation is a hyperplane reflection, a point reflection (for odd Template:Mvar), or another kind of improper rotation. Matrices of all proper rotations form the special orthogonal group.

In two dimensions, to carry out a rotation using matrices the point (x, y) to be rotated (orientation from positive x to y) is written as a vector, then multiplied by a matrix calculated from the angle, θ:

where (x′, y′) are the coordinates of the point that after rotation, and the formulae for Template:Mvar and Template:Mvar can be seen to be

have the same magnitude and are separated by an angle Template:Mvar as expected.

{{safesubst:#invoke:anchor|main}} Points on the R2 plane can be also presented as complex numbers: the point (x, y) in the plane is represented by the complex number

This can be rotated through an angle Template:Mvar by multiplying it by eiθ, then expanding the product using Euler's formula as follows:

and equating real and imaginary parts gives the same result as a two-dimensional matrix:

Since complex numbers form a commutative ring, vector rotations in two dimensions are commutative, unlike in higher dimensions. They have only one degree of freedom, as such rotations are entirely determined by the angle of rotation.[1]

The set of all appropriate matrices together with the operation of matrix multiplication is the rotation group SO(3). The matrix A is a member of the three-dimensional special orthogonal group, SO(3), that is it is an orthogonal matrix with determinant 1. That it is an orthogonal matrix means that its rows are a set of orthogonal unit vectors (so they are an orthonormal basis) as are its columns, making it simple to spot and check if a matrix is a valid rotation matrix.

Above-mentioned Euler angles and axis–angle representations can be easily converted to a rotation matrix.

Another possibility to represent a rotation of three-dimensional Euclidean vectors are quaternions described below.

Unit quaternions, or versors, are in some ways the least intuitive representation of three-dimensional rotations. They are not the three-dimensional instance of a general approach. They are more compact than matrices and easier to work with than all other methods, so are often preferred in real-world applications.{{ safesubst:#invoke:Unsubst||date=__DATE__ |$B= {{#invoke:Category handler|main}}{{#invoke:Category handler|main}}[citation needed] }}

A versor (also called a rotation quaternion) consists of four real numbers, constrained so the norm of the quaternion is 1. This constraint limits the degrees of freedom of the quaternion to three, as required. Unlike matrices and complex numbers two multiplications are needed:

where q is the versor, q−1 is its inverse, and x is the vector treated as a quaternion with zero scalar part. The quaternion can be related to the rotation vector form of the axis angle rotation by the exponential map over the quaternions,

where v is the rotation vector treated as a quaternion.

A single multiplication by a versor, either left or right, is itself a rotation, but in four dimensions. Any four-dimensional rotation about the origin can be represented with two quaternion multiplications: one left and one right, by two different unit quaternions.

More alternatives to the matrix formalism

As was demonstrated above, there exist three multilinear algebra rotation formalisms: one of U(1), or complex numbers, for two dimensions, and yet two of versors, or quaternions, for three and four dimensions.

In general (and not necessarily for Euclidean vectors) the rotation of a vector space equipped with a quadratic form can be expressed as a bivector. This formalism is used in geometric algebra and, more generally, in the Clifford algebra representation of Lie groups.

The doubly-covering group of SO(n) is known as the Spin group, Spin(n). It can be conveniently described in terms of Clifford algebra. Unit quaternions present the group Spin(3).

In spherical geometry, a direct motion of the [[n-sphere|Template:Mvar-sphere]] (an example of the elliptic geometry) is the same as a rotation of (n + 1)-dimensional Euclidean space about the origin (SO(n + 1)). For odd Template:Mvar, most of these motions do not have fixed points on the Template:Mvar-sphere and, strictly speaking, are not rotations of the sphere; such motions are sometimes referred to as Clifford translations. Rotations about a fixed point in elliptic and hyperbolic geometries are not different from Euclidean ones.

Affine geometry and projective geometry have not a distinct notion of rotation.

{{#invoke:main|main}} One application of this is special relativity, as it can be considered to operate in a four-dimensional space, spacetime, spanned by three space dimensions and one of time. In special relativity this space is linear and the four-dimensional rotations, called Lorentz transformations, have practical physical interpretations. The Minkowski space is not a metric space, and the term isometry is inapplicable to Lorentz transformation.

If a rotation is only in the three space dimensions, i.e. in a plane that is entirely in space, then this rotation is the same as a spatial rotation in three dimensions. But a rotation in a plane spanned by a space dimension and a time dimension is a hyperbolic rotation, a transformation between two different reference frames, which is sometimes called a "Lorentz boost". These transformations demonstrate the pseudo-Euclidean nature of the Minkowski space. They are sometimes described as squeeze mappings and frequently appear on Minkowski diagrams which visualize (1 + 1)-dimensional pseudo-Euclidean geometry on planar drawings. The study of relativity is concerned with the Lorentz group generated by the space rotations and hyperbolic rotations.[2]

As was stated above, Euclidean rotations are applied to rigid body dynamics. Moreover, most of mathematical formalism in physics (such as the vector calculus) is rotation-invariant; see rotation for more physical aspects. Euclidean rotations and, more generally, Lorentz symmetry described above are thought to be symmetry laws of nature. In contrast, the reflectional symmetry is not a precise symmetry law of nature.

The complex-valued matrices analogous to real orthogonal matrices are the unitary matrices. The set of all unitary matrices in a given dimension Template:Mvar forms a unitary group U(n) of degree Template:Mvar; and its subgroup representing proper rotationsTemplate:Clarify is the special unitary group SU(n) of degree Template:Mvar. These complex rotations are important in the context of spinors. The elements of SU(2) are used to parametrize three-dimensional Euclidean rotations (see above), as well as respective transformations of the spin (see representation theory of SU(2)). Template:Expand section