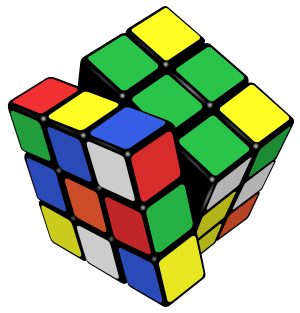 The Rubik’s Cube group is a group (G, •) that corresponds to the set G of all cube moves on the Rubik's Cube mechanical puzzle with the group operation • being the concatenation of cube moves. With the solved position as a starting point, there is a one-to-one correspondence between each of the legal positions of the Rubik's Cube and the elements of G.[1][2]

A 3×3×3 Rubik's Cube consists of 6 faces, each with 9 colored squares called facets, for a total of 54 facets. A solved cube has all of the facets on each face having the same color.

Cube moves are described with the Singmaster notation:[4]

The empty move is

is the same as

is the same as

The following uses the notation described in How to solve the Rubik's Cube. The orientation of the six centre facets is fixed.

The cardinality of G is given by

.[5] Despite being this large, any position can be solved in 20 or fewer moves (where a half-twist is counted as a single move).[3]

G is non-abelian since, for example,

is not the same as

. That is, not all cube moves commute with each other.[2]

We consider two subgroups of G: First the subgroup Co of cube orientations, the moves that leave the position of every block fixed, but can change the orientations of blocks. This group is a normal subgroup of G. It can be represented as the normal closure of some moves that flip a few edges or twist a few corners. For example, it is the normal closure of the following two moves:

Second, we take the subgroup Cp of cube permutations, the moves which can change the positions of the blocks, but leave the orientation fixed. For this subgroup there are several choices, depending on the precise way you define orientation.Template:Refn One choice is the following group, given by generators (the last generator is a 3 cycle on the edges):

Since Co is a normal subgroup, the intersection of Co and Cp is the identity, and their product is the whole cube group, it follows that the cube group G is the semi-direct product of these two groups. That is

Next we can take a closer look at these two groups. The structure of Co is

since the group of rotations of each corner (resp. edge) cube is

), and in each case all but one may be rotated freely, but these rotations determine the orientation of the last one. Noticing that there are 8 corners and 12 edges, and that all the rotation groups are abelian, gives the above structure.

This group can also be described as the subdirect product

When the centre facet symmetries are taken into account, the symmetry group is a subgroup of

(This unimportance of centre facet rotations is an implicit example of a quotient group at work, shielding the reader from the full automorphism group of the object in question.)

The symmetry group of the Rubik's Cube obtained by dismembering it and reassembling is slightly larger: namely it is the direct product

The simple groups that occur as quotients in the composition series of the standard cube group (i.e. ignoring centre piece rotations) are