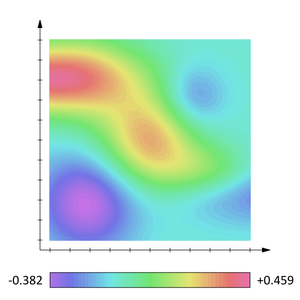 A scalar field such as temperature or pressure, where intensity of the field is graphically represented by different hues of color.

In mathematics and physics, a scalar field associates a scalar value to every point in a space. The scalar may either be a mathematical number or a physical quantity. Scalar fields are required to be coordinate-independent, meaning that any two observers using the same units will agree on the value of the scalar field at the same point in space (or spacetime). Examples used in physics include the temperature distribution throughout space, the pressure distribution in a fluid, and spin-zero quantum fields, such as the Higgs field. These fields are the subject of scalar field theory.

Mathematically, a scalar field on a region U is a real or complex-valued function or distribution on U.[1][2] The region U may be a set in some Euclidean space, Minkowski space, or more generally a subset of a manifold, and it is typical in mathematics to impose further conditions on the field, such that it be continuous or often continuously differentiable to some order. A scalar field is a tensor field of order zero,[3] and the term "scalar field" may be used to distinguish a function of this kind with a more general tensor field, density, or differential form.

Physically, a scalar field is additionally distinguished by having units of measurement associated with it. In this context, a scalar field should also be independent of the coordinate system used to describe the physical system—that is, any two observers using the same units must agree on the numerical value of a scalar field at any given point of physical space. Scalar fields are contrasted with other physical quantities such as vector fields, which associate a vector to every point of a region, as well as tensor fields and spinor fields.{{ safesubst:#invoke:Unsubst||date=__DATE__ |$B= {{#invoke:Category handler|main}}{{#invoke:Category handler|main}}[citation needed] }} More subtly, scalar fields are often contrasted with pseudoscalar fields.

Examples in quantum theory and relativity

Other kinds of fields