The seven-dimensional cross product is one way of generalising the cross product to other than three dimensions, and it is the only other non-trivial bilinear product of two vectors that is vector valued, anticommutative and orthogonal.[2] In other dimensions there are vector-valued products of three or more vectors that satisfy these conditions, and binary products with bivector results.

The product can be given by a multiplication table, such as the one above. This table, due to Cayley,[3][4] gives the product of basis vectors ei and ej for each i, j from 1 to 7. For example from the table

The table can be used to calculate the product of any two vectors. For example to calculate the e1 component of x × y the basis vectors that multiply to produce e1 can be picked out to give

This can be repeated for the other six components.

There are 480 such tables, one for each of the products satisfying the definition.[5] This table can be summarized by the relation[4]

The top left 3 × 3 corner of this table gives the cross product in three dimensions.

The cross product on a Euclidean space V is a bilinear map from V × V to V, mapping vectors x and y in V to another vector x × y also in V, where x × y has the properties[1][6]

where (x·y) is the Euclidean dot product and |x| is the vector norm. The first property states that the product is perpendicular to its arguments, while the second property gives the magnitude of the product. An equivalent expression in terms of the angle θ between the vectors[7] is[8]

which is the area of the parallelogram in the plane of x and y with the two vectors as sides.[9] A third statement of the magnitude condition is[10]

Consequences of the defining properties

Given the properties of bilinearity, orthogonality and magnitude, a nonzero cross product exists only in three and seven dimensions.[2][8][10] This can be shown by postulating the properties required for the cross product, then deducing an equation which is only satisfied when the dimension is 0, 1, 3 or 7. In zero dimensions there is only the zero vector, while in one dimension all vectors are parallel, so in both these cases the product must be identically zero.

In contrast the three-dimensional cross product, which is unique (apart from sign), there are many possible binary cross products in seven dimensions. One way to see this is to note that given any pair of vectors x and y ∈ ℝ7 and any vector v of magnitude |v| = |x||y| sin θ in the five-dimensional space perpendicular to the plane spanned by x and y, it is possible to find a cross product with a multiplication table (and an associated set of basis vectors) such that x × y = v. Unlike in three dimensions, x × y = a × b does not imply that a and b lie in the same plane as x and y.[8]

Further properties follow from the definition, including the following identities:

Other properties follow only in the three-dimensional case, and are not satisfied by the seven-dimensional cross product, notably,

To define a particular cross product, an orthonormal basis {ej} may be selected and a multiplication table provided that determines all the products {ei × ej}. One possible multiplication table is described in the Example section, but it is not unique.[5] Unlike three dimensions, there are many tables because every pair of unit vectors is perpendicular to five other unit vectors, allowing many choices for each cross product.

Once we have established a multiplication table, it is then applied to general vectors x and y by expressing x and y in terms of the basis and expanding x × y through bilinearity.

Using e1 to e7 for the basis vectors a different multiplication table from the one in the Introduction, leading to a different cross product, is given with anticommutativity by[8]

More compactly this rule can be written as

with i = 1...7 modulo 7 and the indices i, i + 1 and i + 3 allowed to permute evenly. Together with anticommutativity this generates the product. This rule directly produces the two diagonals immediately adjacent to the diagonal of zeros in the table. Also, from an identity in the subsection on consequences,

which produces diagonals further out, and so on.

The ej component of cross product x × y is given by selecting all occurrences of ej in the table and collecting the corresponding components of x from the left column and of y from the top row. The result is:

The cross product is then given by 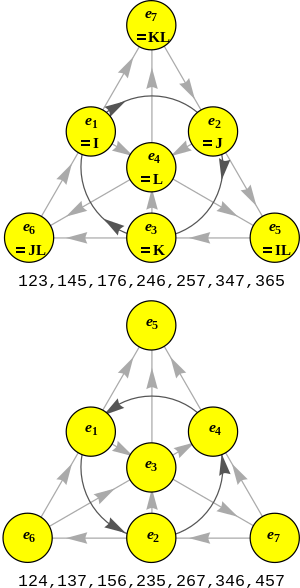 Two different multiplication tables have been used in this article, and there are more.[5][12] These multiplication tables are characterized by the Fano plane,[13][14] and these are shown in the figure for the two tables used here: at top, the one described by Sabinin, Sbitneva, and Shestakov, and at bottom that described by Lounesto. The numbers under the Fano diagrams (the set of lines in the diagram) indicate a set of indices for seven independent products in each case, interpreted as ijk → ei × ej = ek. The multiplication table is recovered from the Fano diagram by following either the straight line connecting any three points, or the circle in the center, with a sign as given by the arrows. For example, the first row of multiplications resulting in e1 in the above listing is obtained by following the three paths connected to e1 in the lower Fano diagram: the circular path e2 × e4, the diagonal path e3 × e7, and the edge path e6 × e1 = e5 rearranged using one of the above identities as:

also obtained directly from the diagram with the rule that any two unit vectors on a straight line are connected by multiplication to the third unit vector on that straight line with signs according to the arrows (sign of the permutation that orders the unit vectors).

It can be seen that both multiplication rules follow from the same Fano diagram by simply renaming the unit vectors, and changing the sense of the center unit vector. Considering all possible permutations of the basis there are 480 multiplication tables and so 480 cross products like this.[14]

The product can also be calculated using geometric algebra. The product starts with the exterior product, a bivector valued product of two vectors:

This is bilinear, alternate, has the desired magnitude, but is not vector valued. The vector, and so the cross product, comes from the product of this bivector with a trivector. In three dimensions up to a scale factor there is only one trivector, the pseudoscalar of the space, and a product of the above bivector and one of the two unit trivectors gives the vector result, the dual of the bivector.

A similar calculation is done is seven dimensions, except as trivectors form a 35-dimensional space there are many trivectors that could be used, though not just any trivector will do. The trivector that gives the same product as the above coordinate transform is

is the left contraction operator from geometric algebra.[8][15]

Relation to the octonions

Conversely, suppose V is a 7-dimensional Euclidean space with a given cross product. Then one can define a bilinear multiplication on ℝ⊕V as follows:

The space ℝ⊕V with this multiplication is then isomorphic to the octonions.[16]

The failure of the 7-dimension cross product to satisfy the Jacobi identity is due to the nonassociativity of the octonions. In fact,

Nonzero binary cross products exist only in three and seven dimensions. Further products are possible when lifting the restriction that it must be a binary product.[19][20] We require the product to be multi-linear, alternating, vector-valued, and orthogonal to each of the input vectors. The orthogonality requirement implies that in n dimensions, no more than n − 1 vectors can be used. The magnitude of the product should equal the volume of the parallelotope with the vectors as edges, which can be calculated using the Gram determinant. The conditions are

The Gram determinant is the squared volume of the parallelotope with a1, ..., ak as edges.

With these conditions a non-trivial cross product only exists:

where v is the same trivector as used in seven dimensions,

There are also trivial products. As noted already, a binary product only exists in 7, 3, 1 and 0 dimensions, the last two being identically zero. A further trivial 'product' arises in even dimensions, which takes a single vector and produces a vector of the same magnitude orthogonal to it through the left contraction with a suitable bivector. In two dimensions this is a rotation through a right angle.