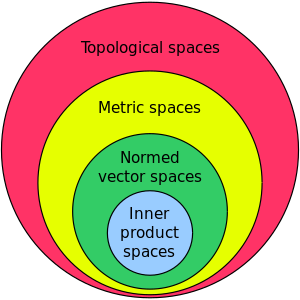 A hierarchy of mathematical spaces: The inner product induces a norm. The norm induces a metric. The metric induces a topology.

In mathematics, a space is a set (sometimes called a universe) with some added structure.

Before the golden age of geometry

In the ancient mathematics, "space" was a geometric abstraction of the three-dimensional space observed in the everyday life. Axiomatic method had been the main research tool since Euclid (about 300 BC). The method of coordinates (analytic geometry) was adopted by René Descartes in 1637.[1] At that time, geometric theorems were treated as an absolute objective truth knowable through intuition and reason, similar to objects of natural science;[2] and axioms were treated as obvious implications of definitions.[3]

Two equivalence relations between geometric figures were used: congruence and similarity. Translations, rotations and reflections transform a figure into congruent figures; homotheties — into similar figures. For example, all circles are mutually similar, but ellipses are not similar to circles. A third equivalence relation, introduced by projective geometry (Gaspard Monge, 1795), corresponds to projective transformations. Not only ellipses but also parabolas and hyperbolas turn into circles under appropriate projective transformations; they all are projectively equivalent figures.

The relation between the two geometries, Euclidean and projective,[4] shows that mathematical objects are not given to us with their structure.[5] Rather, each mathematical theory describes its objects by some of their properties, precisely those that are put as axioms at the foundations of the theory.[6]

A different situation appeared in the 19th century: in some geometries the sum of the three angles of a triangle is well-defined but different from the classical value (180 degrees). The non-Euclidean hyperbolic geometry, introduced by Nikolai Lobachevsky in 1829 and János Bolyai in 1832 (and Carl Gauss in 1816, unpublished)[4] stated that the sum depends on the triangle and is always less than 180 degrees. Eugenio Beltrami in 1868 and Felix Klein in 1871 obtained Euclidean "models" of the non-Euclidean hyperbolic geometry, and thereby completely justified this theory.[7]

This discovery forced the abandonment of the pretensions to the absolute truth of Euclidean geometry. It showed that axioms are not "obvious", nor "implications of definitions". Rather, they are hypotheses. To what extent do they correspond to an experimental reality? This important physical problem no longer has anything to do with mathematics. Even if a "geometry" does not correspond to an experimental reality, its theorems remain no less "mathematical truths".[3]

According to Nicolas Bourbaki,[8] the period between 1795 ("Geometrie descriptive" of Monge) and 1872 (the "Erlangen programme" of Klein) can be called the golden age of geometry. Analytic geometry made a great progress and succeeded in replacing theorems of classical geometry with computations via invariants of transformation groups.[9] Since that time new theorems of classical geometry are of more interest to amateurs rather than to professional mathematicians.[10]

However, it does not mean that the heritage of the classical geometry was lost. According to Bourbaki,[11] "passed over in its role as an autonomous and living science, classical geometry is thus transfigured into a universal language of contemporary mathematics".

According to the famous inaugural lecture given by Bernhard Riemann in 1854, every mathematical object parametrized by

real numbers may be treated as a point of the

-dimensional space of all such objects.[12] Nowadays mathematicians follow this idea routinely and find it extremely suggestive to use the terminology of classical geometry nearly everywhere.[11]

In order to fully appreciate the generality of this approach one should note that mathematics is "a pure theory of forms, which has as its purpose, not the combination of quantities, or of their images, the numbers, but objects of thought" (Hermann Hankel, 1867).[5]

Functions are important mathematical objects. Usually they form infinite-dimensional spaces, as noted already by Riemann[13] and elaborated in the 20th century by functional analysis.

An object parametrized by

complex numbers may be treated as a point of a complex

-dimensional space. However, the same object is also parametrized by

real numbers (real parts and imaginary parts of the complex numbers), thus, a point of a real

The original space investigated by Euclid is now called "the three-dimensional Euclidean space". Its axiomatization, started by Euclid 23 centuries ago, was finalized in the 20th century by David Hilbert, with alternate treatments by Alfred Tarski and George Birkhoff among others. This approach describes the space via undefined primitives (such as "point", "between", "congruent") constrained by a number of axioms. Such a definition "from scratch" is now not often used, since it does not reveal the relation of this space to other spaces. The modern approach defines the three-dimensional Euclidean space more algebraically, via vector spaces and quadratic forms, namely, as an affine space whose difference space is a three-dimensional inner product space.

Also a three-dimensional projective space is now defined non-classically, as the space of all one-dimensional subspaces (that is, straight lines through the origin) of a four-dimensional vector space.

A space consists now of selected mathematical objects (for instance, functions on another space, or subspaces of another space, or just elements of a set) treated as points, and selected relationships between these points. It shows that spaces are just mathematical structures. One may expect that the structures called "spaces" are more geometric than others, but this is not always true. For example, a differentiable manifold (called also smooth manifold) is much more geometric than a measurable space, but no one calls it "differentiable space" (nor "smooth space").

Spaces are classified on three levels. Given that each mathematical theory describes its objects by some of their properties, the first question to ask is: which properties?

Also the distinction between a Euclidean plane and a Euclidean 3-dimensional space is not an upper-level distinction; the question "what is the dimension" makes sense in both cases.

In terms of Bourbaki[14] the upper-level classification is related to "typical characterization" (or "typification"). However, it is not the same (since two equivalent structures may differ in typification).

In terms of Bourbaki[14] the second-level classification is the classification by "species". Unlike biological taxonomy, a space may belong to several species.

The notion of isomorphism sheds light on the upper-level classification. Given a one-to-one correspondence between two spaces of the same type, one may ask whether it is an isomorphism or not. This question makes no sense for two spaces of different type.

Two relations between spaces, and a property of spaces

Euclidean axioms leave no freedom, they determine uniquely all geometric properties of the space. More exactly: all three-dimensional Euclidean spaces are mutually isomorphic. In this sense we have "the" three-dimensional Euclidean space. In terms of Bourbaki, the corresponding theory is univalent. In contrast, topological spaces are generally non-isomorphic, their theory is multivalent. A similar idea occurs in mathematical logic: a theory is called categorical if all its models of the same cardinality are mutually isomorphic. According to Bourbaki,[15] the study of multivalent theories is the most striking feature which distinguishes modern mathematics from classical mathematics. 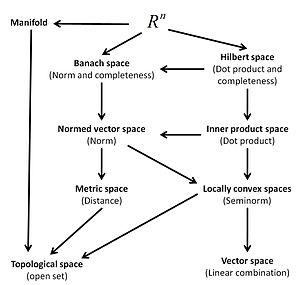 Overview of types of abstract spaces. An arrow from space A to space B implies that space A is also a kind of space B. That means, for instance, that a normed vector space is also a metric space.

Linear spaces are of algebraic nature; there are real linear spaces (over the field of real numbers), complex linear spaces (over the field of complex numbers), and more generally, linear spaces over any field. Every complex linear space is also a real linear space (the latter underlies the former), since each real number is also a complex number.[details 1] Linear operations, given in a linear space by definition, lead to such notions as straight lines (and planes, and other linear subspaces); parallel lines; ellipses (and ellipsoids). However, orthogonal (perpendicular) lines cannot be defined, and circles cannot be singled out among ellipses. The dimension of a linear space is defined as the maximal number of linearly independent vectors or, equivalently, as the minimal number of vectors that span the space; it may be finite or infinite. Two linear spaces over the same field are isomorphic if and only if they are of the same dimension.

is homeomorphic to the whole real line

but not homeomorphic to the closed interval

and the extended real line

are compact; the open interval

are not. Geometric topology investigates manifolds (another "species" of this "type"); these are topological spaces locally homeomorphic to Euclidean spaces. Low-dimensional manifolds are completely classified (up to homeomorphism).

It is convenient to introduce affine and projective spaces by means of linear spaces, as follows. An

-dimensional linear subspace of an

-dimensional linear space, being itself an

-dimensional linear space, is not homogeneous; it contains a special point, the origin. Shifting it by a vector external to it, one obtains an

-dimensional affine space. It is homogeneous. In the words of John Baez, "an affine space is a vector space that's forgotten its origin". A straight line in the affine space is, by definition, its intersection with a two-dimensional linear subspace (plane through the origin) of the

-dimensional linear space is, by definition, an

Defined this way, affine and projective spaces are of algebraic nature; they can be real, complex, and more generally, over any field.

A topological space is called metrizable, if it underlies a metric space. All manifolds are metrizable.

Every Euclidean space is also a complete metric space. Moreover, all geometric notions immanent to a Euclidean space can be characterized in terms of its metric. For example, the straight segment connecting two given points

consists of all points

such that the distance between

is equal to the sum of two distances, between

Vectors in a Euclidean space are a linear space, but each vector

has also a length, in other words, norm,

The set of all vectors of norm less than one is called the unit ball of a normed space. It is a convex, centrally symmetric set, generally not an ellipsoid; for example, it may be a polygon (on the plane). The parallelogram law (called also parallelogram identity)

generally fails in normed spaces, but holds for vectors in Euclidean spaces, which follows from the fact that the squared Euclidean norm of a vector is its inner product to itself.

-dimensional real inner product spaces are mutually isomorphic. One may say that the

-dimensional Euclidean space is the

-dimensional linear spaces. A smooth function has (at every point) the differential, – a linear functional on the tangent space. Real (or complex) finite-dimensional linear, affine and projective spaces are also smooth manifolds.

Waiving distances and angles while retaining volumes (of geometric bodies) one moves toward measure theory. Besides the volume, a measure generalizes area, length, mass (or charge) distribution, and also probability distribution, according to Andrey Kolmogorov's approach to probability theory.

A "geometric body" of classical mathematics is much more regular than just a set of points. The boundary of the body is of zero volume. Thus, the volume of the body is the volume of its interior, and the interior can be exhausted by an infinite sequence of cubes. In contrast, the boundary of an arbitrary set of points can be of non-zero volume (an example: the set of all rational points inside a given cube). Measure theory succeeded in extending the notion of volume (or another measure) to a vast class of sets, so-called measurable sets. Indeed, non-measurable sets almost never occur in applications, but anyway, the theory must restrict itself to measurable sets (and functions).

Sets of measure 0, called null sets, are negligible. Accordingly, a

isomorphism is defined as isomorphism between subsets of full measure (that is, with negligible complement).

one of them is the interval

These spaces are less geometric. In particular, the idea of dimension, applicable (in one form or another) to all other spaces, does not apply to measurable, measure and probability spaces.