A heavy-duty helical spring designed for compression and tension. 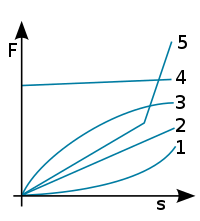 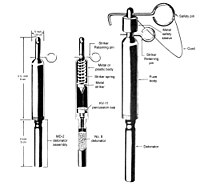 A spring is an elastic object used to store mechanical energy. Springs are usually made out of spring steel. There are a large number of spring designs; in everyday usage the term often refers to coil springs.

Small springs can be wound from pre-hardened stock, while larger ones are made from annealed steel and hardened after fabrication. Some non-ferrous metals are also used including phosphor bronze and titanium for parts requiring corrosion resistance and beryllium copper for springs carrying electrical current (because of its low electrical resistance).

When a coil spring is compressed or stretched slightly from rest, the force it exerts is approximately proportional to its change in length (this approximation breaks down for larger deflections). The rate or spring constant of a spring is the change in the force it exerts, divided by the change in deflection of the spring. That is, it is the gradient of the force versus deflection curve. An extension or compression spring has units of force divided by distance, for example lbf/in or N/m. Torsion springs have units of torque divided by angle, such as N·m/rad or ft·lbf/degree. The inverse of spring rate is compliance, that is: if a spring has a rate of 10 N/mm, it has a compliance of 0.1 mm/N. The stiffness (or rate) of springs in parallel is additive, as is the compliance of springs in series.

Depending on the design and required operating environment, any material can be used to construct a spring, so long as the material has the required combination of rigidity and elasticity: technically, a wooden bow is a form of spring.

Simple non-coiled springs were used throughout human history, e.g. the bow (and arrow). In the Bronze Age more sophisticated spring devices were used, as shown by the spread of tweezers in many cultures. Ctesibius of Alexandria developed a method for making bronze with spring-like characteristics by producing an alloy of bronze with an increased proportion of tin, and then hardening it by hammering after it was cast.

Coiled springs appeared early in the 15th century,[1] in door locks.[2] The first spring powered-clocks appeared in that century[2][3][4] and evolved into the first large watches by the 16th century.

In 1676 British physicist Robert Hooke discovered Hooke's law which states that the force a spring exerts is proportional to its extension.

A spiral torsion spring, or hairspring, in an alarm clock.

A volute spring. Under compression the coils slide over each other, so affording longer travel.

A torsion bar twisted under load

Leaf spring on a truck

Springs can be classified depending on how the load force is applied to them:

They can also be classified based on their shape:

The most common types of spring are:

As long as they are not stretched or compressed beyond their elastic limit, most springs obey Hooke's law, which states that the force with which the spring pushes back is linearly proportional to the distance from its equilibrium length:

Coil springs and other common springs typically obey Hooke's law. There are useful springs that don't: springs based on beam bending can for example produce forces that vary nonlinearly with displacement.

{{#invoke:main|main}} Since force is equal to mass, m, times acceleration, a, the force equation for a spring obeying Hooke's law looks like: 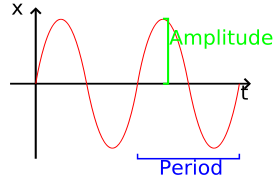 The displacement, x, as a function of time. The amount of time that passes between peaks is called the period.

The mass of the spring is assumed small in comparison to the mass of the attached mass and is ignored. Since acceleration is simply the second derivative of x with respect to time,

This is a second order linear differential equation for the displacement

as a function of time. Rearranging:

the solution of which is the sum of a sine and cosine:

are arbitrary constants that may be found by considering the initial displacement and velocity of the mass. The graph of this function with

(zero initial position with some positive initial velocity) is displayed in the image on the right.

This law actually holds only approximately, and only when the deformation (extension or contraction) is small compared to the rod's overall length. For deformations beyond the elastic limit, atomic bonds get broken or rearranged, and a spring may snap, buckle, or permanently deform. Many materials have no clearly defined elastic limit, and Hooke's law can not be meaningfully applied to these materials. Moreover, for the superelastic materials, the linear relationship between force and displacement is appropriate only in the low-strain region.

Hooke's law is a mathematical consequence of the fact that the potential energy of the rod is a minimum when it has its relaxed length. Any smooth function of one variable approximates a quadratic function when examined near enough to its minimum point as a result of the Taylor series. Therefore, the force—which is the derivative of energy with respect to displacement—will approximate a linear function.

"Zero-length spring" is a term for a specially designed coil spring that would exert zero force if it had zero length. That is, in a line graph of the spring's force versus its length, the line passes through the origin. Obviously a coil spring cannot contract to zero length because at some point the coils will touch each other and the spring will not be able to shorten any more. Zero length springs are made by manufacturing a coil spring with built-in tension, so if it could contract further, the equilibrium point of the spring, the point at which its restoring force is zero, occurs at a length of zero. In practice, zero length springs are made by combining a "negative length" spring, made with even more tension so its equilibrium point would be at a "negative" length, with a piece of inelastic material of the proper length so the zero force point would occur at zero length.

A zero length spring can be attached to a mass on a hinged boom in such a way that the force on the mass is almost exactly balanced by the vertical component of the force from the spring, whatever the position of the boom. This creates a horizontal "pendulum" with very long oscillation period. Long-period pendulums enable seismometers to sense the slowest waves from earthquakes. The LaCoste suspension with zero-length springs is also used in gravimeters because it is very sensitive to changes in gravity. Springs for closing doors are often made to have roughly zero length so that they will exert force even when the door is almost closed, so it will close firmly.