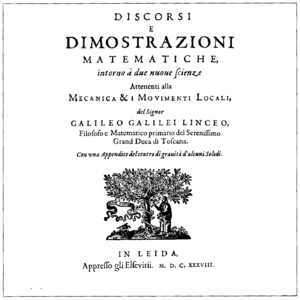 The square-cube law was first mentioned in Two New Sciences (1638).

The square-cube law (or cube-square law) is a mathematical principle, applied in a variety of scientific fields, which describes the relationship between the volume and the area as a shape's size increases or decreases. It was first described in 1638 by Galileo Galilei in his Two New Sciences.

This principle states that, as a shape grows in size, its volume grows faster than its surface area. When applied to the real world this principle has many implications which are important in fields ranging from mechanical engineering to biomechanics. It helps explain phenomena including why large mammals like elephants have a harder time cooling themselves than small ones like mice, and why building taller and taller skyscrapers is increasingly difficult.

The square-cube law can be stated as follows:

is the original surface area and

is the new surface area.

is the original volume,

is the new volume,

is the original length and

is the new length.

When a physical object maintains the same density and is scaled up, its mass is increased by the cube of the multiplier while its surface area only increases by the square of said multiplier. This would mean that when the larger version of the object is accelerated at the same rate as the original, more pressure would be exerted on the surface of the larger object.

Let us consider a simple example of a body of mass, M, having an acceleration, a, and surface area, A, of the surface upon which the accelerating force is acting. The force due to acceleration,

and the thrust pressure,

Now, let us consider the object be exaggerated by a multiplier factor = x so that it has a new mass,

, and the surface upon which the force is acting has a new surface area,

The new force due to acceleration

and the resulting thrust pressure,

Thus, just scaling up the size of an object, keeping the same material of construction (density), and same acceleration, would increase the thrust by the same scaling factor. This would indicate that the object would have less ability to resist stress and would be more prone to collapse while accelerating.

This is why large vehicles perform poorly in crash tests and why there are limits to how high buildings can be built. Similarly, the larger an object is, the less other objects would resist its motion, causing its deceleration.

If an animal were isometrically scaled up by a considerable amount, its relative muscular strength would be severely reduced, since the cross section of its muscles would increase by the square of the scaling factor while its mass would increase by the cube of the scaling factor. As a result of this, cardiovascular and respiratory functions would be severely burdened.

In the case of flying animals, the wing loading would be increased if they were isometrically scaled up, and they would therefore have to fly faster to gain the same amount of lift. Air resistance per unit mass is also higher for smaller animals, which is why a small animal like an ant cannot be seriously injured from impact with the ground after being dropped from any height.

As was elucidated by J. B. S. Haldane, large animals do not look like small animals: an elephant cannot be mistaken for a mouse scaled up in size. This is due to allometric scaling: the bones of an elephant are necessarily proportionately much larger than the bones of a mouse, because they must carry proportionately higher weight. To quote from Haldane's seminal essay On Being the Right Size, "...consider a man 60 feet high...Giant Pope and Giant Pagan in the illustrated Pilgrim's Progress.... These monsters...weighed 1000 times as much as Christian. Every square inch of a giant bone had to support 10 times the weight borne by a square inch of human bone. As the human thigh-bone breaks under about 10 times the human weight, Pope and Pagan would have broken their thighs every time they took a step." Consequently, most animals show allometric scaling with increased size, both among species and within a species. The giant monsters seen in horror movies (e.g., Godzilla or King Kong) are also unrealistic, as their sheer size would force them to collapse.

However, the buoyancy of water negates to some extent the effects of gravity. Therefore, sea creatures can grow to very large sizes without the same musculoskeletal structures that would be required of similarly sized land creatures, and it is no coincidence that the largest animals to ever exist on earth are aquatic animals.