In physics, a squeezed coherent state is any state of the quantum mechanical Hilbert space such that the uncertainty principle is saturated. That is, the product of the corresponding two operators takes on its minimum value: 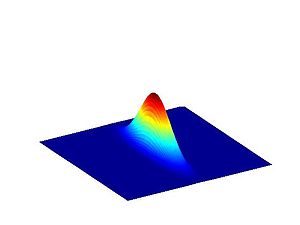 The simplest such state is the ground state

of the quantum harmonic oscillator. The next simple class of states that satisfies this identity are the family of coherent states

Often, the term squeezed state is used for any such state with

in "natural oscillator units". The idea behind this is that the circle denoting a coherent state in a quadrature diagram (see below) has been "squeezed" to an ellipse of the same area. [1] [2] [3] [4] [5]

are constants (a normalization constant, the center of the wavepacket, its width, and the expectation value of its momentum). The new feature relative to a coherent state is the free value of the width

, which is the reason why the state is called "squeezed".

The squeezed state above is an eigenstate of a linear operator

and the corresponding eigenvalue equals

. In this sense, it is a generalization of the ground state as well as the coherent state.

Depending on at which phase the state's quantum noise is reduced, one can distinguish amplitude-squeezed and phase-squeezed states or general quadrature squeezed states. If no coherent excitation exists the state is called a squeezed vacuum. The figures below give a nice visual demonstration of the close connection between squeezed states and Heisenberg's uncertainty relation: Diminishing the quantum noise at a specific quadrature (phase) of the wave has as a direct consequence an enhancement of the noise of the complementary quadrature, that is, the field at the phase shifted by

As can be seen at once, in contrast to the coherent state the quantum noise for a squeezed state is no longer independent of the phase of the light wave. A characteristic broadening and narrowing of the noise during one oscillation period can be observed. The wave packet of a squeezed state is defined by the square of the wave function introduced in the last paragraph. They correspond to the probability distribution of the electric field strength of the light wave. The moving wave packets display an oscillatory motion combined with the widening and narrowing of their distribution: the "breathing" of the wave packet. For an amplitude-squeezed state, the most narrow distribution of the wave packet is reached at the field maximum, resulting in an amplitude that is defined more precisely than the one of a coherent state. For a phase-squeezed state, the most narrow distribution is reached at field zero, resulting in an average phase value that is better defined than the one of a coherent state.

In phase space, quantum mechanical uncertainties can be depicted by Wigner distribution Wigner quasi-probability distribution. The intensity of the light wave, its coherent excitation, is given by the displacement of the Wigner distribution from the origin. A change in the phase of the squeezed quadrature results in a rotation of the distribution.

The squeezing angle, that is the phase with minimum quantum noise, has a large influence on the photon number distribution of the light wave and its phase distribution as well. 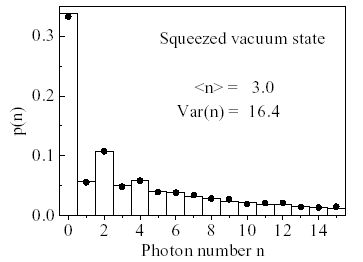 Figure 4: Reconstructed and theoretical photon number distributions for a squeezed-vacuum state. A pure squeezed vacuum state would have no contribution from odd-photon-number states. The non-zero contribution in the above figure is because the detected state is not a pure state - losses in the setup convert the pure squeezed vacuum into a mixed state. [6] (source: link 1)

There has been a whole variety of successful demonstrations of squeezed states. The most prominent ones were experiments with light fields using lasers and non-linear optics (see optical parametric oscillator). This is achieved by a simple process of four-wave mixing with a

crystal is pumped in absence of any signal. Sub-Poissonian current sources driving semiconductor laser diodes have led to amplitude squeezed light.[8] Squeezed states have also been realized via motional states of an ion in a trap, phonon states in crystal lattices, or atom ensembles.{{ safesubst:#invoke:Unsubst||date=__DATE__ |$B= {{#invoke:Category handler|main}}{{#invoke:Category handler|main}}[citation needed] }} Even macroscopic oscillators were driven into classical motional states that were very similar to squeezed coherent states. Current state of the art in noise suppression, for laser radiation using squeezed light, amounts to 12.7 dB.[9]

Various squeezed coherent states, generalized to the case of many degrees of freedom, are used in various calculations in quantum field theory, for example Unruh effect and Hawking radiation, and generally, particle production in curved backgrounds and Bogoliubov transformation).