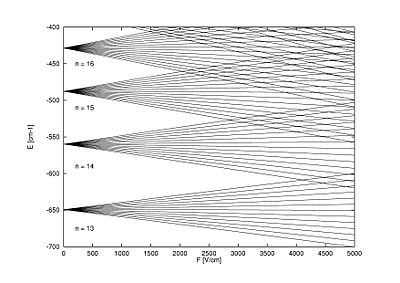 Computed regular (non-chaotic) Rydberg atom energy level spectra of hydrogen in an electric field near n=15 for magnetic quantum number m=0. Each n-level consists of n-1 degenerate sublevels; application of an electric field breaks the degeneracy. Note that energy levels can cross due to underlying symmetries of dynamical motion.[1]

"Stark shift" is not to be confused with Stokes shift.

The Stark effect is responsible for the pressure broadening (Stark broadening) of spectral lines by charged particles. When the split/shifted lines appear in absorption, the effect is called the inverse Stark effect.

The Stark effect is the electric analogue of the Zeeman effect where a spectral line is split into several components due to the presence of a magnetic field.

The Stark effect can be explained with fully quantum mechanical approaches, but it has also been a fertile testing ground for semiclassical methods.

The effect is named after Johannes Stark, who discovered it in 1913. It was independently discovered in the same year by the Italian physicist Antonino Lo Surdo, and in Italy it is thus sometimes called the Stark-Lo Surdo effect. The discovery of this effect contributed importantly to the development of quantum theory. Curiously, soon after their discoveries, both Stark and Lo Surdo rejected developments in modern physics and allied themselves with the political and racial programs of Hitler and Mussolini.[2]

Inspired by the magnetic Zeeman effect, and especially by Lorentz's explanation of it, Woldemar Voigt[3] performed classical mechanical calculations of quasi-elastically bound electrons in an electric field. By using experimental indices of refraction he gave an estimate of the Stark splittings. This estimate was a few orders of magnitude too low. Not deterred by this prediction, Stark[4] undertook measurements on excited states of the hydrogen atom and succeeded in observing splittings.

By the use of the Bohr-Sommerfeld ("old") quantum theory Paul Epstein[5] and Karl Schwarzschild[6] were independently able to derive equations for the linear and quadratic Stark effect in hydrogen. Four years later, Hendrik Kramers[7] derived formulas for intensities of spectral transitions. Kramers also included the effect of fine structure, which includes corrections for relativistic kinetic energy and coupling between electron spin and orbit. The first quantum mechanical treatment (in the framework of Heisenberg's matrix mechanics) was by Wolfgang Pauli.[8] Erwin Schrödinger discussed at length the Stark effect in his third paper[9] on quantum theory (in which he introduced his perturbation theory), once in the manner of the 1916 work of Epstein (but generalized from the old to the new quantum theory) and once by his (first-order) perturbation approach. Finally, Epstein[10] reconsidered the linear and quadratic Stark effect from the point of view of the new quantum theory. He derived equations for the line intensities which were a decided improvement over Kramers' results obtained by the old quantum theory.

While first-order perturbation effects for the Stark effect in hydrogen are in agreement for the Bohr-Sommerfeld model and the quantum-mechanical theory of the atom, higher order effects are not.{{ safesubst:#invoke:Unsubst||date=__DATE__ |$B= {{#invoke:Category handler|main}}{{#invoke:Category handler|main}}[citation needed] }} Measurements of the Stark effect under high field strengths confirmed the correctness of the quantum theory over the Bohr model.

An electric field pointing from left to right, for example, tends to pull nuclei to the right and electrons to the left. In another way of viewing it, if an electronic state has its electron disproportionately to the left, its energy is lowered, while if it has the electron disproportionately to the right, its energy is raised.

Other things equal, the effect of the electric field is greater for outer electron shells, because the electron is more distant from the nucleus, so it travels farther left and farther right.

The Stark effect can lead to splitting of degenerate energy levels. For example, in the Bohr model, an electron has the same energy whether it is in the 2s state or any of the 2p states. However, in an electric field, there will be hybrid orbitals (also called quantum superpositions) of the 2s and 2p states where the electron tends to be to the left, which will acquire a lower energy, and other hybrid orbitals where the electron tends to be to the right, which will acquire a higher energy. Therefore, the formerly degenerate energy levels will split into slightly lower and slightly higher energy levels.

, with the electric field:

where we took the origin 0 somewhere within ρ. Setting V(0) as the zero energy, the interaction becomes

Here we have introduced the dipole moment μ of ρ as an integral over the charge distribution. In case ρ consists of N point charges qj this definition becomes a sum

Turning now to quantum mechanics we see an atom or a molecule as a collection of point charges (electrons and nuclei), so that the second definition of the dipole applies. The interaction of atom or molecule with a uniform external field is described by the operator

. (Non-degeneracy is the special case g = 1). According to perturbation theory the first-order energies are the eigenvalues of the g x g matrix with general element

is the azimuthal (angular momentum) quantum number. For instance, the excited n = 4 state contains the following

The one-electron states with even

are even under parity, while those with odd

The first-order Stark effect occurs in rotational transitions of symmetric top molecules (but not for linear and asymmetric molecules). In first approximation a molecule may be seen as a rigid rotor. A symmetric top rigid rotor has the unperturbed eigenstates

with 2(2J+1)-fold degenerate energy for |K| > 0 and (2J+1)-fold degenerate energy for K=0. Here DJMK is an element of the Wigner D-matrix. The first-order perturbation matrix on basis of the unperturbed rigid rotor function is non-zero and can be diagonalized. This gives shifts and splittings in the rotational spectrum. Quantitative analysis of these Stark shift yields the permanent electric dipole moment of the symmetric top molecule.

As stated, the quadratic Stark effect is described by second-order perturbation theory. The zeroth-order problems

are assumed to be solved. It is usual to assume that the zeroth-order state to be perturbed is non-degenerate. If we take the ground state as the non-degenerate state under consideration (for hydrogen-like atoms: n = 1), perturbation theory gives

with the components of the polarizability tensor α defined by

Because of their spherical symmetry the polarizability tensor of atoms is isotropic,

which is the quadratic Stark shift for atoms. For many molecules this expression is not too bad an approximation, because molecular tensors are often reasonably isotropic.

The perturbative treatment of the Stark effect has some problems. In the presence of an electric field, states of atoms and molecules that were previously bound (square-integrable), become formally (non-square-integrable) resonances of finite width. These resonances may decay in finite time via field ionization. For low lying states and not too strong fields the decay times are so long, however, that for all practical purposes the system can be regarded as bound. For highly excited states and/or very strong fields ionization may have to be accounted for. (See also the article on the Rydberg atom).

{{#invoke:main|main}} In a semiconductor heterostructure, where a small bandgap material is sandwiched between two layers of a larger bandgap material, the Stark effect can be dramatically enhanced by bound excitons. This is because the electron and hole which form the exciton are pulled in opposite directions by the applied electric field, but they remain confined in the smaller bandgap material, so the exciton is not merely pulled apart by the field. The quantum-confined Stark effect is widely used for semiconductor-based optical modulators, particularly for optical fiber communications.

|CitationClass=book }} (Chapter 17 provides a comprehensive treatment, as of 1935.)