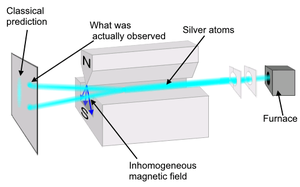 Basic elements of the Stern–Gerlach experiment.

The Stern–Gerlach experiment involves sending a beam of particles through an inhomogeneous magnetic field and observing their deflection. The results show that particles possess an intrinsic angular momentum that is closely analogous to the angular momentum of a classically spinning object, but that takes only certain quantized values. Another important result is that only one component of a particle's spin can be measured at one time, meaning that the measurement of the spin along the z-axis destroys information about a particle's spin along the x and y axis.

The experiment is normally conducted using electrically neutral particles or atoms. This avoids the large deflection to the orbit of a charged particle moving through a magnetic field and allows spin-dependent effects to dominate. If the particle is treated as a classical spinning dipole, it will precess in a magnetic field because of the torque that the magnetic field exerts on the dipole (see torque-induced precession). If it moves through a homogeneous magnetic field, the forces exerted on opposite ends of the dipole cancel each other out and the trajectory of the particle is unaffected. However, if the magnetic field is inhomogeneous then the force on one end of the dipole will be slightly greater than the opposing force on the other end, so that there is a net force which deflects the particle's trajectory. If the particles were classical spinning objects, one would expect the distribution of their spin angular momentum vectors to be random and continuous. Each particle would be deflected by a different amount, producing some density distribution on the detector screen. Instead, the particles passing through the Stern–Gerlach apparatus are deflected either up or down by a specific amount. This was a measurement of the quantum observable now known as spin, which demonstrated possible outcomes of a measurement where the observable has point spectrum. Although some discrete quantum phenomena, such as atomic spectra, were observed much earlier, the Stern–Gerlach experiment allowed scientists to conduct measurements of deliberately superposed quantum states for the first time in the history of science.

By now it is known theoretically that quantum angular momentum of any kind has a discrete spectrum, which is sometimes imprecisely expressed as "angular momentum is quantized".

If the experiment is conducted using charged particles like electrons, there will be a Lorentz force that tends to bend the trajectory in a circle (see cyclotron motion). This force can be cancelled by an electric field of appropriate magnitude oriented transverse to the charged particle's path.

Electrons are [[spin-½|spin-Template:Frac]] particles. (It must be noted that observation of the Stern-Gerlach effect with free electrons is infeasible.[2]) These have only two possible spin angular momentum values measured along any axis, +ħ/2 or −ħ/2, a sheerly quantum mechanical phenomenon. Because its value is always the same, it is regarded as an intrinsic property of electrons, and is sometimes known as "intrinsic angular momentum" (to distinguish it from orbital angular momentum, which can vary and depends on the presence of other particles).

To describe the experiment with spin +Template:Frac particles mathematically, it is easiest to use Dirac's bra–ket notation. As the particles pass through the Stern–Gerlach device, they are being observed by the detector which resolves to either spin up or spin down. These are described by the angular momentum quantum number j, which can take on one of the two possible allowed values, either +ħ/2 or −ħ/2. The act of observing (measuring) the momentum along the z axis corresponds to the operator Jz. In mathematical terms,

The constants c1 and c2 are complex numbers. The squares of their absolute values (|c1|2 and |c2|2) determine the probabilities that in the state

one of the two possible values of j is found. The constants must also be normalized in order that the probability of finding either one of the values be unity. However, this information is not sufficient to determine the values of c1 and c2, because they may in fact be complex numbers. Therefore the measurement yields only the absolute values of the constants.

If we link multiple Stern–Gerlach apparatuses, we can clearly see that they do not act as simple selectors, but alter the states observed (as in light polarization), according to quantum mechanical law: [3]

A plaque at the Frankfurt institute commemorating the experiment

At the time of the experiment, the most prevalent model for describing the atom was the Bohr model, which described electrons as going around the positively charged nucleus only in certain discrete atomic orbitals or energy levels. Since the electron was quantized to be only in certain positions in space, the separation into distinct orbits was referred to as space quantization. The Stern–Gerlach experiment was meant to test the Bohr–Sommerfeld hypothesis that the direction of the angular momentum of a silver atom is quantized.[4]

Note that the experiment was performed several years before Uhlenbeck and Goudsmit formulated their hypothesis of the existence of the electron spin. Even though the result of the Stern−Gerlach experiment has later turned out to be in agreement with the predictions of quantum mechanics for a spin-Template:Frac particle, the experiment should be seen as a corroboration of the Bohr–Sommerfeld theory.[5]

In 1927, T.E. Phipps and J.B. Taylor reproduced the effect using hydrogen atoms in their ground state, thereby eliminating any doubts that may have been caused by the use of silver atoms.[6] (In 1926 the non-relativistic Schrödinger equation had incorrectly predicted the magnetic moment of hydrogen to be zero in its ground state. To correct this problem Wolfgang Pauli introduced "by hand", so to speak, the 3 Pauli matrices which now bear his name, but which were later shown by Paul Dirac in 1928 to be intrinsic in his relativistic equation.)[7]