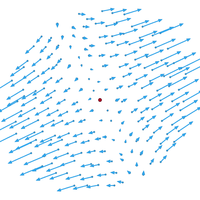 A two-dimensional flow that, at the highlighted point, has only a strain rate component, with no mean velocity or rotational component.

In continuum mechanics, the strain rate tensor is a physical quantity that describes the rate of change of the deformation of a material in the neighborhood of a certain point, at a certain moment of time. It can be defined as the derivative of the strain tensor with respect to time, or as the symmetric component of the gradient (derivative with respect to position) of the flow velocity.

The strain rate tensor is a purely kinematic concept that describes the macroscopic motion of the material. Therefore, it does not depend on the nature of the material, or on the forces and stresses that may be acting on it; and it applies to any continuous medium, whether solid, liquid or gas.

On the other hand, for any fluid except superfluids, any gradual change in its deformation (i.e. a non-zero strain rate tensor) gives rise to viscous forces in its interior, due to friction between adjacent fluid elements, that tend to oppose that change. At any point in the fluid, these stresses can be described by a viscous stress tensor that is, almost always, completely determined by the strain rate tensor and by certain intrinsic properties of the fluid at that point. Viscous stress also occur in solids, in addition to the elastic stress observed in static deformation; when it is too large to be ignored, the material is said to be viscoelastic.

Consider a material body, solid or fluid, that is flowing and/or moving in space. Let

be the velocity field within the body; that is, a smooth function from

at a point displaced from

by a small vector

can be written as a Taylor series:

the gradient of the velocity field, understood as a linear map that takes a displacement vector

In an arbitrary reference frame,

is the Jacobian matrix of the field, namely the 3×3 matrix

is the component of

denotes the partial derivative of a function

with respect to the space coordinate

is a function of

In this coordinate system, the Taylor approximation for the velocity near

are viewed as 3×1 matrices.

with symmetric and antisymmetric components

This decomposition is independent of coordinate system, and so has physical significance. Then the velocity field may be approximated as

represents a rigid-like rotation of the fluid about the point

is called the rotational curl of the vector field. A rigid rotation does not change the relative positions of the fluid elements, so the antisymmetric term

of the velocity gradient does not contribute to the rate of change of the deformation. The actual strain rate is therefore described by the symmetric

term, which is the strain rate tensor.

of velocity gradient (the rate-of-strain tensor) can be broken down further as the sum of a scalar times the unit tensor, that represents a gradual isotropic expansion or contraction; and a traceless symmetric tensor which represents a gradual shearing deformation, with no change in volume:[1]

is the unit tensor, such that

. This decomposition is independent of the choice of coordinate system, and is therefore physically significant.

The expansion rate tensor is 1/3 of the divergence of the velocity field:

which is the rate at which the volume of a fixed amount of fluid increases at that point.

The shear rate tensor is represented by a symmetric 3×3 matrix, and describes a flow that combines compression and expansion flows along three orthogonal axes, such that there is no change in volume. This type of flow occurs, for example, when a rubber strip is stretched by pulling at the ends, or when honey falls from a spoon as a smooth unbroken stream.

For a two-dimensional flow, the divergence of

has only two terms and quantifies the change in area rather than volume. The factor 1/3 in the expansion rate term should be replaced by 1/2 in that case.