The red particle moves in a flowing fluid; its pathline is traced in red; the tip of the trail of blue ink released from the origin follows the particle, but unlike the static pathline (which records the earlier motion of the dot), ink released after the red dot departs continues to move up with the flow. (This is a streakline.) The dashed lines represent contours of the velocity field (streamlines), showing the motion of the whole field at the same time. (See high resolution version.)

Solid blue lines and broken grey lines represent the streamlines. The red arrows show the direction and magnitude of the flow velocity. These arrows are tangential to the streamline. The group of streamlines enclose the green curves (

) to form a stream surface.

Fluid flow is characterized by a velocity vector field in three-dimensional space, within the framework of continuum mechanics. Streamlines, streaklines, and pathlines are field lines resulting from this vector field description of the flow. They differ only when the flow changes with time: that is, when the flow is not steady.[1] [2]

Streamlines and timelines provide a snapshot of some flowfield characteristics, whereas streaklines and pathlines depend on the Template:Not a typo-history of the flow. However, often sequences of timelines (and streaklines) at different instants—being presented either in a single image or with a video stream—may be used to provide insight in the flow and its history.

Dye line may refer either to a streakline: dye released gradually from a fixed location during time; or it may refer to a timeline: a line of dye applied instantaneously at a certain moment in time, and observed at a later instant.

Streamlines are defined by[4]

" denotes the vector cross product and

is the parametric representation of just one streamline at one moment in time.

If the components of the velocity are written

and those of the streamline as

A streamtube consist of a bundle of streamlines, much like communication cable.

which shows that the curves are parallel to the velocity vector. Here

is a variable which parametrizes the curve

A long exposure photo of sparks from a campfire shows the pathlines for the flow of hot air.

Pathlines are defined by

indicates that we are following the motion of a fluid particle. Note that at point

the curve is parallel to the flow velocity vector

, where the velocity vector is evaluated at the position of the particle 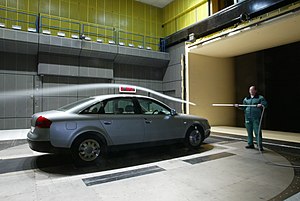 Example of a streakline used to visualize the flow around a car inside a wind tunnel.

Streaklines can be expressed as,

is the velocity of a particle

is a time of interest.

In steady flow (when the velocity vector-field does not change with time), the streamlines, pathlines, and streaklines coincide. This is because when a particle on a streamline reaches a point,

, further on that streamline the equations governing the flow will send it in a certain direction

. As the equations that govern the flow remain the same when another particle reaches

it will also go in the direction

. If the flow is not steady then when the next particle reaches position

the flow would have changed and the particle will go in a different direction.

This is useful, because it is usually very difficult to look at streamlines in an experiment. However, if the flow is steady, one can use streaklines to describe the streamline pattern.

Knowledge of the streamlines can be useful in fluid dynamics. For example, Bernoulli's principle, which describes the relationship between pressure and velocity in an inviscid fluid, is derived for locations along a streamline.

Engineers often use dyes in water or smoke in air in order to see streaklines, from which pathlines can be calculated. Streaklines are identical to streamlines for steady flow. Further, dye can be used to create timelines.[5] The patterns guide their design modifications, aiming to reduce the drag. This task is known as streamlining, and the resulting design is referred to as being streamlined. Streamlined objects and organisms, like steam locomotives, streamliners, cars and dolphins are often aesthetically pleasing to the eye. The Streamline Moderne style, an 1930s and 1940s offshoot of Art Deco, brought flowing lines to architecture and design of the era. The canonical example of a streamlined shape is a chicken egg with the blunt end facing forwards. This shows clearly that the curvature of the front surface can be much steeper than the back of the object. Most drag is caused by eddies in the fluid behind the moving object, and the objective should be to allow the fluid to slow down after passing around the object, and regain pressure, without forming eddies.

The same terms have since become common vernacular to describe any process that smooths an operation. For instance, it is common to hear references to streamlining a business practice, or operation.