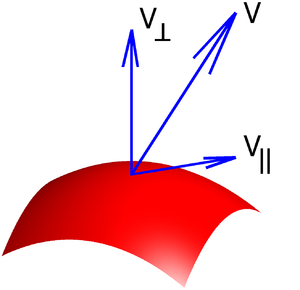 Illustration of tangential and normal components of a vector to a surface.

More generally, given a submanifold N of a manifold M, and a vector in the tangent space to M at a point of N, it can be decomposed into the component tangent to N and the component normal to N.

be a surface, and

be a point on the surface. Let

be a vector at

Then one can write uniquely

where the first vector in the sum is the tangential component and the second one is the normal component. It follows immediately that these two vectors are perpendicular to each other.

To calculate the tangential and normal components, consider a unit normal to the surface, that is, a unit vector

" denotes the dot product. Another formula for the tangential component is

used (there exist two unit normals to any surface at a given point, pointing in opposite directions, so one of the unit normals is the negative of the other one).

More generally, given a submanifold N of a manifold M and a point

, we get a short exact sequence involving the tangent spaces:

is a generalized space of normal vectors.

If M is a Riemannian manifold, the above sequence splits, and the tangent space of M at p decomposes as a direct sum of the component tangent to N and the component normal to N:

Suppose N is given by non-degenerate equations.

If N is given explicitly, via parametric equations (such as a parametric curve), then the derivative gives a spanning set for the tangent bundle (it's a basis if and only if the parametrization is an immersion).

If N is given implicitly (as in the above description of a surface, or more generally as a hypersurface) as a level set or intersection of level surfaces for

, then the gradients of

In both cases, we can again compute using the dot product; the cross product is special to 3 dimensions though.