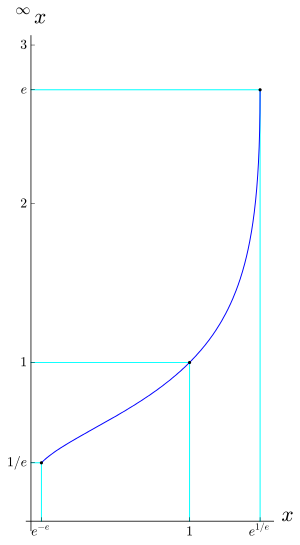 of infinite power tower converges for the bases

In mathematics, tetration (or hyper-4) is the next hyper operator after exponentiation, and is defined as iterated exponentiation. The word was coined by Reuben Louis Goodstein, from tetra- (four) and iteration. Tetration is used for the notation of very large numbers. Shown here are examples of the first four hyper operators, with tetration as the fourth (and succession, the unary operation denoted

and yielding the number after

where each operation is defined by iterating the previous one (the next operation in the sequence is pentation). Tetration is not an elementary function.

Tetration is not an elementary recursive function.[1]

) is the most basic operation; addition (

) is a primary operation, though for natural numbers it can be thought of as a chained succession of n successors of a; multiplication (

) is also a primary operation, though for natural numbers it can be thought of as a chained addition involving n numbers a; and exponentiation (

) can be thought of as a chained multiplication involving n numbers a. Analogously, tetration (

For any positive real

As we can see from the definition, when evaluating tetration expressed as an "exponentiation tower", the exponentiation is done at the deepest level first (in the notation, at the highest level). In other words:

Note that exponentiation is not associative, so evaluating the expression in the other order will lead to a different answer:

Thus, the exponential towers must be evaluated from top to bottom (or right to left). Computer programmers refer to this choice as right-associative.

When a and 10 are coprime, we can compute the last m decimal digits of

There are many terms for tetration, each of which has some logic behind it, but some have not become commonly used for one reason or another. Here is a comparison of each term with its rationale and counter-rationale.

Tetration is often confused with closely related functions and expressions. This is because much of the terminology that is used with them can be used with tetration. Here are a few related terms:

In the first two expressions a is the base, and the number of times a appears is the height (add one for x). In the third expression, n is the height, but each of the bases is different.

There are many different notation styles that can be used to express tetration (aka hyper-4; some of them can be used as well for hyper-5, hyper-6, and higher hyperoperations).

One notation above uses iterated exponential notation; in general this is defined as follows:

There are not as many notations for iterated exponentials, but here are a few:

In the following table, most values are too large to write in scientific notation, so iterated exponential notation is employed to express them in base 10. The values containing a decimal point are approximate.

Tetration can be extended to define

and other domains as well.

Extension of domain for bases

Extension to base zero

is not consistently defined. Thus, the tetrations

are not clearly defined by the formula given earlier. However,

is well defined, and exists:

Thus we could consistently define

. This is equivalent to defining

from the original definition still holds.

Since complex numbers can be raised to powers, tetration can be applied to bases of the form

, tetration is achieved by using the principal branch of the natural logarithm, and using Euler's formula we get the relation:

This suggests a recursive definition for

The following approximate values can be derived:

Solving the inverse relation as in the previous section, yields the expected

, with negative values of n giving infinite results on the imaginary axis. Plotted in the complex plane, the entire sequence spirals to the limit

, which could be interpreted as the value where n is infinite.

Such tetration sequences have been studied since the time of Euler but are poorly understood due to their chaotic behavior. Most published research historically has focused on the convergence of the power tower function. Current research has greatly benefited by the advent of powerful computers with fractal and symbolic mathematics software. Much of what is known about tetration comes from general knowledge of complex dynamics and specific research of the exponential map.

Extensions of the domain for (iteration) "heights"

Tetration can be extended to infinite heights (n in

). This is because for bases within a certain interval, tetration converges to a finite value as the height tends to infinity. For example,

converges to 2, and can therefore be said to be equal to 2. The trend towards 2 can be seen by evaluating a small finite tower:

In general, the infinite power tower

, defined as the limit of

This may be extended to complex numbers z with the definition:

In order to preserve the original rule:

for negative values of

we must use the recursive relation:

which is not well defined.

Note further that for

is consistent with the rule because

. Various approaches are mentioned below.

In general the problem is finding, for any real a > 0, a super-exponential function

over real x > −2 that satisfies

is defined for an interval of length one, the whole function easily follows for all x > −2.

Linear approximation for the extension to real heights

and so on. However, it is only piecewise differentiable; at integer values of x the derivative is multiplied by

is continuous and satisfies the conditions:

is uniquely determined through the equation

denotes the fractional part of x and

-iterated function of the function

The proof is that the second through fourth conditions trivially imply that f is a linear function on [−1, 0].

is continuously differentiable, but its second derivative does not exist at integer values of its argument. Hooshmand derived another uniqueness theorem for it which states:

is a continuous function that satisfies:

is Hooshmand's name for the linear approximation to the natural tetration function.]

The proof is much the same as before; the recursion equation ensures that

and then the convexity condition implies that

which is convex on

. All other sufficiently-differentiable solutions must have an inflection point on the interval (−1, 0).

Higher order approximations for the extension to real heights

A quadratic approximation (to the differentiability requirement) is given by:

which is differentiable for all

, but not twice differentiable. If

this is the same as the linear approximation.

Note that this function does not satisfy condition that tetration "cancels out" (for example as in raising to power:

), because it is calculated top-down (as explained in section Iterated powers above) namely:

Drawing of the analytic extension

of tetration to the complex plane. Levels

are shown with thick curves.

There is a conjecture[11] that there exists a unique function F which is a solution of the equation F(z+1)=exp(F(z)) and satisfies the additional conditions that F(0)=1 and F(z) approaches the fixed points of the logarithm (roughly 0.31813150520476413531 ± 1.33723570143068940890iTemplate:Undue precision) as z approaches ±i∞ and that F is holomorphic in the whole complex z-plane, except the part of the real axis at z≤−2. This function is shown in the figure at right. The complex double precision approximation of this function is available online.[12]

The requirement of holomorphism of tetration is important for the uniqueness. Many functions

can be constructed as

are real sequences which decay fast enough to provide the convergence of the series, at least at moderate values of

The function S satisfies the tetration equations S(z+1)=exp(S(z)), S(0)=1, and if αn and βn approach 0 fast enough it will be analytic on a neighborhood of the positive real axis. However, if some elements of {α} or {β} are not zero, then function S has multitudes of additional singularities and cutlines in the complex plane, due to the exponential growth of sin and cos along the imaginary axis; the smaller the coefficients {α} and {β} are, the further away these singularities are from the real axis.

The extension of tetration into the complex plane is thus essential for the uniqueness; the real-analytic tetration is not unique.

The super-root is the inverse relation of tetration with respect to the base: if

, then y is an nth super root of x. For example, 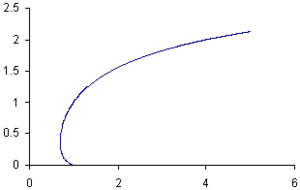 . It is the inverse of

and can be represented with the Lambert W function:[14]

, then x has two positive square super-roots between 0 and 1; and if

, then x has one positive square super-root greater than 1. If x is positive and less than

it doesn't have any real square super-roots, but the formula given above yields countably infinitely many complex ones for any finite x not equal to 1.[14] The function has been used to determine the size of data clusters.[15]

However, if the linear approximation above is used, then

Other super-roots are expressible under the same basisTemplate:Clarify used with normal roots: super cube roots, the function{{ safesubst:#invoke:Unsubst||$N=Dubious |date=__DATE__ |$B= {{#invoke:Category handler|main}}[dubious – discuss] }} that produces y when

, can be expressed as

; the 4th super-root can be expressed as

; and it can therefore be said that the nth super-root is

The super-root can be extended to

, and this shows a link to the mathematical constant e as it is only well-defined if 1/e ≤ x ≤ e (see extension of tetration to infinite heights). Note that

. Therefore, when it is well defined,

and thus it is an elementary function. For example,

for any positive integer n is either integer or transcendental, and

is either integer or irrational.[16] But it is still an open question whether irrational super-roots are transcendental in the latter case.

{{#invoke:main|main}} Once a continuous increasing (in x) definition of tetration, xa, is selected, the corresponding super-logarithm sloga x is defined for all real numbers x, and a > 1.