This effect can be used to generate electricity, measure temperature or change the temperature of objects. Because the direction of heating and cooling is determined by the polarity of the applied voltage, thermoelectric devices can be used as temperature controllers.

The term "thermoelectric effect" encompasses three separately identified effects: the Seebeck effect, Peltier effect, and Thomson effect. Textbooks may refer to it as the Peltier–Seebeck effect. This separation derives from the independent discoveries of French physicist Jean Charles Athanase Peltier and Baltic German physicist Thomas Johann Seebeck. Joule heating, the heat that is generated whenever a current is passed through a resistive material, is related though it is not generally termed a thermoelectric effect. The Peltier–Seebeck and Thomson effects are thermodynamically reversible,[1] whereas Joule heating is not. 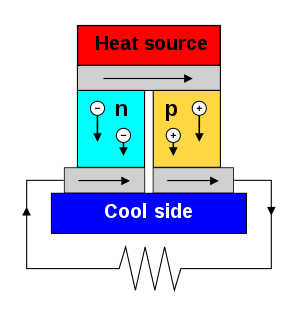 A thermoelectric circuit composed of materials of different Seebeck coefficient (p-doped and n-doped semiconductors), configured as a thermoelectric generator. If the load resistor at the bottom is replaced with a voltmeter the circuit then functions as a temperature-sensing thermocouple.

The Seebeck effect is the conversion of temperature differences directly into electricity and is named after the Baltic German physicist Thomas Johann Seebeck. Seebeck, in 1821, discovered that a compass needle would be deflected by a closed loop formed by two different metals joined in two places, with a temperature difference between the junctions. This was because the metals responded to the temperature difference in different ways, creating a current loop and a magnetic field. Seebeck did not recognize there was an electric current involved, so he called the phenomenon the thermomagnetic effect. Danish physicist Hans Christian Ørsted rectified the mistake and coined the term "thermoelectricity".

The Seebeck effect is a classic example of an electromotive force (emf) and leads to measurable currents or voltages in the same way as any other emf. Electromotive forces modify Ohm's law by generating currents even in the absence of voltage differences (or vice versa); the local current density is given by

is the local voltage[2] and

is the local conductivity. In general, the Seebeck effect is described locally by the creation of an electromotive field

is the Seebeck coefficient (also known as thermopower), a property of the local material, and

is the gradient in temperature

If the system reaches a steady state where

, then the voltage gradient is given simply by the emf:

. This simple relationship, which does not depend on conductivity, is used in the thermocouple to measure a temperature difference; an absolute temperature may be found by performing the voltage measurement at a known reference temperature. A metal of unknown composition can be classified by its thermoelectric effect if a metallic probe of known composition is kept at a constant temperature and held in contact with the unknown sample that is locally heated to the probe temperature. It is used commercially to identify metal alloys. Thermocouples in series form a thermopile. Thermoelectric generators are used for creating power from heat differentials.

The Seebeck circuit configured as a thermoelectric cooler

The Peltier effect is the presence of heating or cooling at an electrified junction of two different conductors and is named for French physicist Jean Charles Athanase Peltier, who discovered it in 1834. When a current is made to flow through a junction between two conductors A and B, heat may be generated (or removed) at the junction. The Peltier heat generated at the junction per unit time,

) is the Peltier coefficient of conductor A (B), and

is the electric current (from A to B). Note that the total heat generated at the junction is not determined by the Peltier effect alone, as it may also be influenced by Joule heating and thermal gradient effects (see below).

The Peltier coefficients represent how much heat is carried per unit charge. Since charge current must be continuous across a junction, the associated heat flow will develop a discontinuity if

are different. The Peltier effect can be considered as the back-action counterpart to the Seebeck effect (analogous to the back-emf in magnetic induction): if a simple thermoelectric circuit is closed then the Seebeck effect will drive a current, which in turn (via the Peltier effect) will always transfer heat from the hot to the cold junction. The close relationship between Peltier and Seebeck effects can be seen in the direct connection between their coefficients:

A typical Peltier heat pump device involves multiple junctions in series, through which a current is driven. Some of the junctions lose heat due to the Peltier effect, while others gain heat. Thermoelectric heat pumps exploit this phenomenon, as do thermoelectric cooling devices found in refrigerators.

In many materials, the Seebeck coefficient is not constant in temperature, and so a spatial gradient in temperature can result in a gradient in the Seebeck coefficient. If a current is driven through this gradient then a continuous version of the Peltier effect will occur. This Thomson effect was predicted and subsequently observed by Lord Kelvin in 1851. It describes the heating or cooling of a current-carrying conductor with a temperature gradient.

If a current density

is passed through a homogeneous conductor, the Thomson effect predicts a heat production rate

per unit volume of:

is the temperature gradient and

(see below). This equation however neglects Joule heating, and ordinary thermal conductivity (see full equations below).

Often, more than one of the above effects is involved in the operation of a real thermoelectric device. The Seebeck effect, Peltier effect, and Thomson effect can be gathered together in a consistent and rigorous way, described here; the effects of Joule heating and ordinary heat conduction are included as well. As stated above, the Seebeck effect generates an electromotive force, leading to the current equation[3]

To describe the Peltier and Thomson effects we must consider the flow of energy. To start we can consider the dynamic case where both temperature and charge may be varying with time. The full thermoelectric equation for the energy accumulation,

is the thermal conductivity. The first term is the Fourier's heat conduction law, and the second term shows the energy carried by currents. The third term

is the heat added from an external source (if applicable).

In the case where the material has reached a steady state, the charge and temperature distributions are stable so one must have both

. Using these facts and the second Thomson relation (see below), the heat equation then can be simplified to

The middle term is the Joule heating, and the last term includes both Peltier (

at junction) and Thomson (

in thermal gradient) effects. Combined with the Seebeck equation for

, this can be used to solve for the steady state voltage and temperature profiles in a complicated system.

If the material is not in a steady state, a complete description will also need to include dynamic effects such as relating to electrical capacitance, inductance, and heat capacity.

In 1854, Lord Kelvin found relationships between the three coefficients, implying that the Thomson, Peltier, and Seebeck effects are different manifestations of one effect (uniquely characterized by the Seebeck coefficient).

The first Thomson relation is[3]

is the absolute temperature,

is the Thomson coefficient,

is the Peltier coefficient, and

is the Seebeck coefficient. This relationship is easily shown given that the Thomson effect is a continuous version of the Peltier effect. Using the second relation (described next), the first Thomson relation becomes

The second Thomson relation is

This relation expresses a subtle and fundamental connection between the Peltier and Seebeck effects. It was not satisfactorily proven until the advent of the Onsager relations, and it is worth noting that this second Thomson relation is only guaranteed for a time-reversal symmetric material; if the material is placed in a magnetic field, or is itself magnetically ordered (ferromagnetic, antiferromagnetic, etc.), then the second Thomson relation does not take the simple form shown here.[4]

Recently Liu Liping of Rutgers University has come out with a research paper on the Feasibility of large scale power plants based on Thermoelectric effect the paper was published in New Journal of Physics on 8 December 2014. In this paper Liping describes how the temperature difference between the surface water of sea and the colder bottom of the sea can be utilized to generate electric power on a large scale. He argues that the generated electricity would be very cheap and affordable.[5]

{{#invoke:main|main}} The Peltier effect can be used to create a refrigerator which is compact and has no circulating fluid or moving parts; such refrigerators are useful in applications where their advantages outweigh the disadvantage of their very low efficiency.

{{#invoke:main|main}} Thermocouples and thermopiles are devices that use the Seebeck effect to measure the temperature difference between two objects, one connected to a voltmeter and the other to the probe. The temperature of the voltmeter, and hence that of the material being measured by the probe, can be measured separately using cold junction compensation techniques.

{{#invoke:main|main}} The Peltier effect is used by many thermal cyclers, laboratory devices used to amplify DNA by the polymerase chain reaction (PCR). PCR requires the cyclic heating and cooling of samples to specified temperatures. The inclusion of many thermocouples in a small space enables many samples to be amplified in parallel.