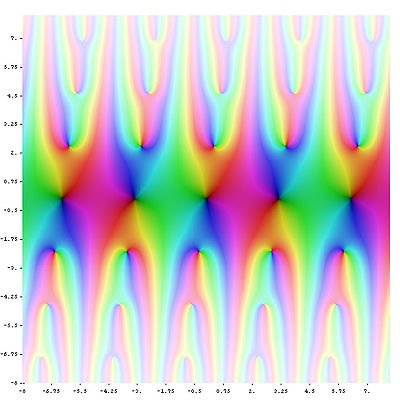 In mathematics, theta functions are special functions of several complex variables. They are important in many areas, including the theories of abelian varieties and moduli spaces, and of quadratic forms. They have also been applied to soliton theory. When generalized to a Grassmann algebra, they also appear in quantum field theory.

The most common form of theta function is that occurring in the theory of elliptic functions. With respect to one of the complex variables (conventionally called z), a theta function has a property expressing its behavior with respect to the addition of a period of the associated elliptic functions, making it a quasiperiodic function. In the abstract theory this comes from a line bundle condition of descent.

There are several closely related functions called Jacobi theta functions, and many different and incompatible systems of notation for them. One Jacobi theta function (named after Carl Gustav Jacob Jacobi) is a function defined for two complex variables z and τ, where z can be any complex number and τ is confined to the upper half-plane, which means it has positive imaginary part. It is given by the formula

where q = exp(πiτ) and η = exp(2πiz). It is a Jacobi form. If τ is fixed, this becomes a Fourier series for a periodic entire function of z with period 1; in this case, the theta function satisfies the identity

where a and b are integers.

. The black dot in the right-hand picture indicates how

. The black dot in the right-hand picture indicates how

The Jacobi theta function defined above is sometimes considered along with three auxiliary theta functions, in which case it is written with a double 0 subscript:

The auxiliary (or half-period) functions are defined by

This notation follows Riemann and Mumford; Jacobi's original formulation was in terms of the nome

rather than τ. In Jacobi's notation the θ-functions are written:

If we set z = 0 in the above theta functions, we obtain four functions of τ only, defined on the upper half-plane (sometimes called theta constants.) These can be used to define a variety of modular forms, and to parametrize certain curves; in particular, the Jacobi identity is

which is the Fermat curve of degree four.

Jacobi's identities describe how theta functions transform under the modular group, which is generated by τ ↦ τ+1 and τ ↦ -1/τ. Equations for the first transform are easily found since adding one to τ in the exponent has the same effect as adding 1/2 to z (n is congruent to n squared modulo 2). For the second, let

Instead of expressing the Theta functions in terms of

and the nome q, where

. In this form, the functions become

It can be proven by elementary means, as for instance in Hardy and Wright's An Introduction to the Theory of Numbers.

If we express the theta function in terms of the nome

is the q-Pochhammer symbol and

is the q-theta function. Expanding terms out, the Jacobi triple product can also be written

which we may also write as

This form is valid in general but clearly is of particular interest when z is real. Similar product formulas for the auxiliary theta functions are

The Jacobi theta functions have the following integral representations:

The next two series identities were proved by István Mező

These relations hold for all 0 < q < 1. Specializing the values of q, we have the next parameter free sums

Zeros of the Jacobi theta functions

All zeros of the Jacobi theta functions are simple zeros and are given by the following:

where m,n are arbitrary integers.

Relation to the Riemann zeta function

was used by Riemann to prove the functional equation for the Riemann zeta function, by means of the integral

which can be shown to be invariant under substitution of s by 1 − s. The corresponding integral for z not zero is given in the article on the Hurwitz zeta function.

Relation to the Weierstrass elliptic function

Relation to the q-gamma function

Let η(τ) be the Dedekind eta function, and the argument of the theta function as the nome

A solution to heat equation

The Jacobi theta function is the fundamental solution of the one-dimensional heat equation with spatially periodic boundary conditions. Taking z = x to be real and τ = it with t real and positive, we can write

which solves the heat equation

This theta-function solution is 1-periodic in x, and as t → 0 it approaches the periodic delta function, or Dirac comb, in the sense of distributions

General solutions of the spatially periodic initial value problem for the heat equation may be obtained by convolving the initial data at t = 0 with the theta function.

Relation to the Heisenberg group

If F is a quadratic form in n variables, then the theta function associated with F is

with the sum extending over the lattice of integers Zn. This theta function is a modular form of weight n/2 (on an appropriately defined subgroup) of the modular group. In the Fourier expansion,

the numbers RF(k) are called the representation numbers of the form.

, the Riemann theta function is defined as

is an n-dimensional complex vector, and the superscript T denotes the transpose. The Jacobi theta function is then a special case, with n = 1 and

is the upper half-plane.

The Riemann theta converges absolutely and uniformly on compact subsets of

The functional equation is

which holds for all vectors

The Poincaré series generalizes the theta series to automorphic forms with respect to arbitrary Fuchsian groups.

|CitationClass=citation }}. (See Chapter 6 for treatment of the Riemann theta)

This article incorporates material from Integral representations of Jacobi theta functions on PlanetMath, which is licensed under the Creative Commons Attribution/Share-Alike License.