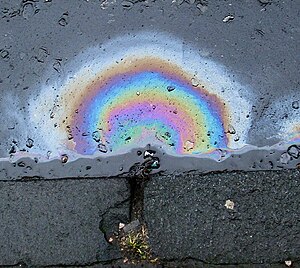 A colorful interference pattern is observed when light is reflected from the top and bottom boundaries of a thin oil film.

Thin-film interference occurs when incident light waves reflected by the upper and lower boundaries of a thin film interfere with one another to form a new wave. Studying this new wave can reveal information about the surfaces from which its components reflected, including the thickness of the film or the effective refractive index of the film medium. Thin films have many commercial applications including anti-reflection coatings, mirrors, and optical filters.

Demonstration of the optical path length difference for light reflected from the upper and lower boundaries of a thin film.

A thin film is a layer of material with thickness in the sub-nanometer to micron range. As light strikes the surface of a film it is either transmitted or reflected at the upper surface. Light that is transmitted reaches the bottom surface and may once again be transmitted or reflected. The Fresnel equations provide a quantitative description of how much of the light will be transmitted or reflected at an interface. The light reflected from the upper and lower surfaces will interfere. The degree of constructive or destructive interference between the two light waves depends on the difference in their phase. This difference in turn depends on the thickness of the film layer, the refractive index of the film, and the angle of incidence of the original wave on the film. Additionally, a phase shift of 180° or

and the light is travelling from material 1 to material 2, then a phase shift occurs upon reflection. The pattern of light that results from this interference can appear either as light and dark bands or as colorful bands depending upon the source of the incident light.

Consider light incident on a thin film and reflected by both the upper and lower boundaries. The optical path difference (OPD) of the reflected light must be calculated in order to determine the condition for interference. Referring to the ray diagram above, the OPD between the two waves is the following:

Interference will be constructive if the optical path difference is equal to an integer multiple of the wavelength of light,

This condition may change after considering possible phase shifts that occur upon reflection.

Where incident light is monochromatic in nature, interference patterns appear as light and dark bands. Light bands correspond to regions at which constructive interference is occurring between the reflected waves and dark bands correspond to destructive interference regions. As the thickness of the film varies from one location to another, the interference may change from constructive to destructive. A good example of this phenomenon, termed "Newton's rings," demonstrates the interference pattern that results when light is reflected from a spherical surface adjacent to a flat surface. Concentric rings are viewed when the surface is illuminated with monochromatic light.

The phase relationship of the two reflected beams depends on the relationship between the light beams’ wavelength and the thickness of the film. If the total distance beam A travels in the film is an integral multiple of the wavelength of the beam, then the two reflected beams tend to reinforce one another (as depicted in the first figure). Otherwise the beams interfere (as in the second figure). Thus, the film shown in these figures reflects more strongly at the wavelength of the light beam in the first figure, and less strongly at that of the beam in the second figure.

The type of interference that occurs when light is reflected from a thin film is dependent upon the wavelength and angle of the incident light, the thickness of the film, the refractive indices of the material on either side of the film, and the index of the film medium. Various possible film configurations and the related equations are explained in more detail in the examples below.

Light incident on a soap film. Air surrounds both sides of the film.

In the case of a soap bubble, light travels through air and strikes a soap film. The air has a refractive index of 1 (

) and the film has an index that is larger than 1 (

). Light that is transmitted at the upper air-film interface will continue to the lower film-air interface where it can be reflected or transmitted. The reflection that occurs at this boundary will not change the phase of the reflected wave because

. The condition for interference for a soap bubble is the following:

is the film thickness,

is the refractive index of the film,

is the angle of incidence of the wave on the lower boundary,

is an integer, and

is the wavelength of light.

Light incident on an oil film. Air is at the upper boundary and water at the lower boundary.

In the case of a thin oil film, a layer of oil sits atop a layer of water. The oil may have an index of refraction near 1.5 and the water has an index of 1.33. As in the case of the soap bubble, the materials on either side of the oil film (air and water) both have refractive indices that are less than the index of the film.

. There will be a phase shift upon reflection from the upper boundary because

but no shift upon reflection from the lower boundary because

. The equations for interference will be the same.

Light incident on an anti-reflection coating. Air is at the upper boundary and glass at the lower boundary.

{{#invoke:main|main}} An anti-reflection coating eliminates reflected light and maximizes transmitted light in an optical system. A film is designed such that reflected light produces destructive interference and transmitted light produces constructive interference for a given wavelength of light. In the simplest implementation of such a coating, the film is created so that its optical thickness

. The equations for interference of the reflected light are:

If the optical thickness

, the reflected waves will be completely out of phase and will destructively interfere. Further reduction in reflection is possible by adding more layers, each designed to match a specific wavelength of light.

Interference of transmitted light is completely constructive for these films.

Thin-film coatings are used in dielectric mirrors to provide near-total reflection of light over a limited range of wavelengths.

Thin films are used commercially in anti-reflection coatings, mirrors, and optical filters. They can be engineered to control the amount of light reflected or transmitted at a surface for a given wavelength. A Fabry–Pérot etalon takes advantage of thin film interference to selectively choose which wavelengths of light are allowed to transmit through the device. These films are created through deposition processes in which material is added to a substrate in a controlled manner. Methods include chemical vapor deposition and various physical vapor deposition techniques.

Thin films are also found in nature. Many animals have a layer of tissue behind the retina, the Tapetum lucidum, that aids in light collecting. The effects of thin-film interference can also be seen in oil slicks and soap bubbles.

Ellipsometry is a technique that is often used to measure properties of thin films. In a typical ellipsometry experiment polarized light is reflected off a film surface and is measured by a detector. The complex reflectance ratio,

, of the system is measured. A model analysis in then conducted in which this information is used to determine film layer thicknesses and refractive indices.

Dual polarisation interferometry is an emerging technique for measuring refractive index and thickness of molecular scale thin films and how these change when stimulated.

Tempering colors are produced when steel is heated and a thin film of iron oxide forms on the surface. The color indicates the temperature the steel reached, which made this one of the earliest practical uses of thin-film interference.

Iridescence caused by thin-film interference is a commonly observed phenomenon in nature, being found in a variety of plants and animals. One of the first known studies of this phenomenon was conducted by Robert Hooke in 1665. In Micrographia, Hooke postulated that the iridescence in peacock feathers was caused by thin, alternating layers of plate and air. In 1704, Isaac Newton stated in his book, Opticks, that the iridescence in a peacock feather was due to the fact that the transparent layers in the feather were so thin.[1] In 1801, Thomas Young provided the first explanation of constructive and destructive interference. Young's contribution went largely unnoticed until the work of Augustin Fresnel. In 1816, Fresnel helped to establish the wave theory of light.[2] However, very little explanation could be made of the iridescence until the late 1800s, when James Maxwell and Heinrich Hertz helped to explain the electromagnetic nature of light.[1] After the invention of the Fabry–Perot interferometer, in 1899, the mechanisms of thin-film interference could be demonstrated on a larger scale.[2]

In much of the early work, scientists tried to explain iridescence, in animals like peacocks and scarab beetles, as some form of surface color, such as a dye or pigment that might alter the light when reflected from different angles. In 1919, Lord Rayleigh proposed that the bright, changing colors were not caused by dyes or pigments, but by microscopic structures, which he termed "structural colors."[1] In 1923, C. W. Mason noted that the barbules in the peacock feather were made from very thin layers. Some of these layers were colored while others were transparent. He noticed that pressing the barbule would shift the color toward the blue, while swelling it with a chemical would shift it toward the red. He also found that bleaching the pigments from the feathers did not remove the iridescence. This helped to dispel the surface color theory and reinforce the structural color theory.[3]

In 1925, Ernest Merritt, in his paper A Spectrophotometric Study of Certain Cases of Structural Color, first described the process of thin-film interference as an explanation for the iridescence. The first examination of iridescent feathers by an electron microscope occurred in 1939, revealing complex thin-film structures, while an examination of the morpho butterfly, in 1942, revealed an extremely tiny array of thin-film structures on the nanometer scale.[1]

The first production of thin-film coatings occurred quite by accident. In 1817, Joseph Fraunhofer discovered that, by tarnishing glass with nitric acid, he could reduce the reflections on the surface. In 1819, after watching a layer of alcohol evaporate from a sheet of glass, Fraunhofer noted that colors appeared just before the liquid evaporated completely, deducing that any thin film of transparent material will produce colors.[2]

Little advancement was made in thin-film coating technology until 1936, when John Strong began evaporating fluorite in order to make anti-reflection coatings on glass. During the 1930s, improvements in vacuum pumps made vacuum deposition methods, like sputtering, possible. In 1939, Walter H. Geffcken created the first interference filters using dielectric coatings.[2]