A time derivative is a derivative of a function with respect to time, usually interpreted as the rate of change of the value of the function.[1] The variable denoting time is usually written as

A variety of notations are used to denote the time derivative. In addition to the normal (Leibniz's) notation,

A very common short-hand notation used, especially in physics, is the 'over-dot'. I.E.

(This is called Newton's notation)

Higher time derivatives are also used: the second derivative with respect to time is written as

with the corresponding shorthand of

As a generalization, the time derivative of a vector, say:

is defined as the vector whose components are the derivatives of the components of the original vector. That is,

Time derivatives are a key concept in physics. For example, for a changing position

is its velocity, and its second derivative with respect to time,

, is its acceleration. Even higher derivatives are sometimes also used: the third derivative of position with respect to time is known as the jerk. See motion graphs and derivatives.

A common occurrence in physics is the time derivative of a vector, such as velocity or displacement. In dealing with such a derivative, both magnitude and orientation may depend upon time. 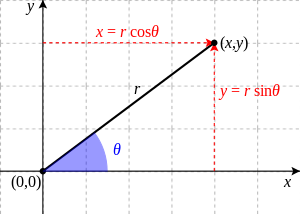 For example, consider a particle moving in a circular path. Its position is given by the displacement vector

, related to the angle, θ, and radial distance, r, as defined in the figure:

For purposes of this example, time dependence is introduced by setting θ = t. The displacement (position) at any time t is then

is the usual euclidean dot product.

Thus the velocity of the particle is nonzero even though the magnitude of the position (that is, the radius of the path) is constant. The velocity is directed perpendicular to the displacement, as can be established using the dot product:

Acceleration is then the time-derivative of velocity:

The acceleration is directed inward, toward the axis of rotation. It points opposite to the position vector and perpendicular to the velocity vector. This inward-directed acceleration is called centripetal acceleration.

In economics, many theoretical models of the evolution of various economic variables are constructed in continuous time and therefore employ time derivatives. See for example exogenous growth model and [2]ch. 1-3. One situation involves a stock variable and its time derivative, a flow variable. Examples include:

Sometimes the time derivative of a flow variable can appear in a model:

And sometimes there appears a time derivative of a variable which, unlike the examples above, is not measured in units of currency: