of values calculated by the iterated application of a mapping

Illustration showing the trajectory of a bullet fired at an uphill target.

A familiar example of a trajectory is the path of a projectile such as a thrown ball or rock. In a greatly simplified model the object moves only under the influence of a uniform gravitational force field. This can be a good approximation for a rock that is thrown for short distances for example, at the surface of the moon. In this simple approximation the trajectory takes the shape of a parabola. Generally, when determining trajectories it may be necessary to account for nonuniform gravitational forces and air resistance (drag and aerodynamics). This is the focus of the discipline of ballistics.

One of the remarkable achievements of Newtonian mechanics was the derivation of the laws of Kepler. In the gravitational field of a point mass or a spherically-symmetrical extended mass (such as the Sun), the trajectory of a moving object is a conic section, usually an ellipse or a hyperbola.Template:Efn This agrees with the observed orbits of planets, comets, and artificial spacecraft, to a reasonably good approximation, although if a comet passes close to the Sun, then it is also influenced by other forces, such as the solar wind and radiation pressure, which modify the orbit, and cause the comet to eject material into space.

Newton's theory later developed into the branch of theoretical physics known as classical mechanics. It employs the mathematics of differential calculus (which was, in fact, also initiated by Newton, in his youth). Over the centuries, countless scientists contributed to the development of these two disciplines. Classical mechanics became a most prominent demonstration of the power of rational thought, i.e. reason, in science as well as technology. It helps to understand and predict an enormous range of phenomena. Trajectories are but one example.

Consider a particle of mass

, moving in a potential field

represents external forces, of a particular kind known as "conservative". That is, given

at every relevant position, there is a way to infer the associated force that would act at that position, say from gravity. Not all forces can be expressed in this way, however.

On the right-hand side, the force is given in terms of

, the gradient of the potential, taken at positions along the trajectory. This is the mathematical form of Newton's second law of motion: force equals mass times acceleration, for such situations.

Uniform gravity, no drag or wind

In the analysis that follows we derive the equation of motion of a projectile as measured from an inertial frame, at rest with respect to the ground, to which frame is associated a right-hand co-ordinate system - the origin of which coincides with the point of launch of the projectile. The x-axis is parallel to the ground and the y axis perpendicular to it ( parallel to the gravitational field lines ). Let

be the acceleration of gravity. Relative to the flat terrain, let the initial horizontal speed be

and the initial vertical speed be

. It will also be shown that, the range is

, and the maximum altitude is

; The maximum range, for a given initial speed

Derivation of the equation of motion

. The co-ordinates of this free-fall frame, with respect to our inertial frame would be

(where v0 is the initial velocity,

is the angle of elevation, and g is the acceleration due to gravity). 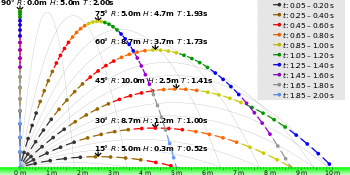 Trajectories of projectiles launched at different elevation angles but the same speed of 10 m/s in a vacuum and uniform downward gravity field of 10 m/s2. Points are at 0.05 s intervals and length of their tails is linearly proportional to their speed. t = time from launch, T = time of flight, R = range and H = highest point of trajectory (indicated with arrows).

The height, h, is the greatest parabolic height said object reaches within its trajectory

giving the range as

for a given range

and setting it to zero.

which has a nontrivial solution at

. The maximum range is then

, so the maximum height obtained is

which is zero when

. So the maximum height

is obtained when the projectile is fired straight up.

Uphill/downhill in uniform gravity in a vacuum

Given a hill angle

as before, it can be shown that the range along the hill

forms a ratio with the original range

along the imaginary horizontal, such that:

In this equation, downhill occurs when

is between 0 and -90 degrees. For this range of

. Thus for this range of

is a positive value meaning the range downhill is always further than along level terrain. The lower level of terrain causes the projectile to remain in the air longer, allowing it to travel further horizontally before hitting the ground.

While the same equation applies to projectiles fired uphill, the interpretation is more complex as sometimes the uphill range may be shorter or longer than the equivalent range along level terrain. Equation 11 may be set to

(i.e. the slant range is equal to the level terrain range) and solving for the "critical angle"

(i.e. close to horizontal firing, which is the case for many firearm situations). For small values, both

have a small value and thus when multiplied together (as in equation 11), the result is almost zero. Thus equation 11 may be approximated as:

And solving for level terrain range,

Thus if the shooter attempts to hit the level distance R, s/he will actually hit the slant target. "In other words, pretend that the inclined target is at a horizontal distance equal to the slant range distance multiplied by the cosine of the inclination angle, and aim as if the target were really at that horizontal position."[1]

Derivation based on equations of a parabola

in standard linear form at coordinates

Substituting the value of

This value of x may be substituted back into the linear equation 12 to get the corresponding y coordinate at the intercept:

is the distance of the intercept from the origin, which is just the hypotenuse of x and y:

is defined as the angle of the hill, so by definition of tangent,

. This can be substituted into the equation for

Now this can be refactored and the trigonometric identity for

by the previously used trigonometric identity and

If instead of a uniform downwards gravitational force we consider two bodies orbiting with the mutual gravitation between them, we obtain Kepler's laws of planetary motion. The derivation of these was one of the major works of Isaac Newton and provided much of the motivation for the development of differential calculus.

If a projectile, such as a baseball or cricket ball, travels in a parabolic path, with negligible air resistance, and if a player is positioned so as to catch it as it descends, he sees its angle of elevation increasing continuously throughout its flight. The tangent of the angle of elevation is proportional to the time since the ball was sent into the air, usually by being struck with a bat. Even when the ball is really descending, near the end of its flight, its angle of elevation seen by the player continues to increase. The player therefore sees it as if it were ascending vertically at constant speed. Finding the place from which the ball appears to rise steadily helps the player to position himself correctly to make the catch. If he is too close to the batsman who has hit the ball, it will appear to rise at an accelerating rate. If he is too far from the batsman, it will appear to slow rapidly, and then to descend.