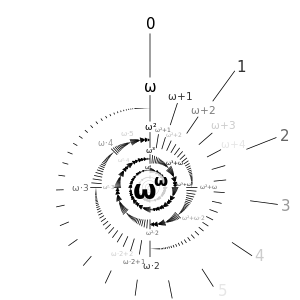 Let P(α) be a property defined for all ordinals α. Suppose that whenever P(β) is true for all β < α, then P(α) is also true (including the case that P(0) is true given the vacuously true statement that P(α) is true for all

). Then transfinite induction tells us that P is true for all ordinals.

Usually the proof is broken down into three cases:

Notice that all three cases are identical except for the type of ordinal considered. They do not formally need to be considered separately, but in practice the proofs are typically so different as to require separate presentations. Zero is sometimes considered a limit ordinal and then may sometimes be treated in proofs in the same case as limit ordinals.

Transfinite recursion is similar to transfinite induction; however, instead of proving that something holds for all ordinal numbers, we construct a sequence of objects, one for each ordinal.

As an example, a basis for a (possibly infinite-dimensional) vector space can be created by choosing a vector

. This process stops when no vector can be chosen.

More formally, we can state the Transfinite Recursion Theorem as follows:

α) for all ordinals α, where

denotes the restriction of F's domain to ordinals < α.

As in the case of induction, we may treat different types of ordinals separately: another formulation of transfinite recursion is the following:

Note that we require the domains of G2, G3 to be broad enough to make the above properties meaningful. The uniqueness of the sequence satisfying these properties can be proven using transfinite induction.

More generally, one can define objects by transfinite recursion on any well-founded relation R. (R need not even be a set; it can be a proper class, provided it is a set-like relation; that is, for any x, the collection of all y such that y R x must be a set.)

Relationship to the axiom of choice

The following construction of the Vitali set shows one way that the axiom of choice can be used in a proof by transfinite induction:

First, well-order the real numbers (this is where the axiom of choice enters via the well-ordering theorem), giving a sequence

, where β is an ordinal with the cardinality of the continuum. Let v0 equal r0. Then let v1 equal rα1, where α1 is least such that rα1 − v0 is not a rational number. Continue; at each step use the least real from the r sequence that does not have a rational difference with any element thus far constructed in the v sequence. Continue until all the reals in the r sequence are exhausted. The final v sequence will enumerate the Vitali set.

Other uses of the axiom of choice are more subtle. For example, a construction by transfinite recursion frequently will not specify a unique value for Aα+1, given the sequence up to α, but will specify only a condition that Aα+1 must satisfy, and argue that there is at least one set satisfying this condition. If it is not possible to define a unique example of such a set at each stage, then it may be necessary to invoke (some form of) the axiom of choice to select one such at each step. For inductions and recursions of countable length, the weaker axiom of dependent choice is sufficient. Because there are models of Zermelo–Fraenkel set theory of interest to set theorists that satisfy the axiom of dependent choice but not the full axiom of choice, the knowledge that a particular proof only requires dependent choice can be useful.