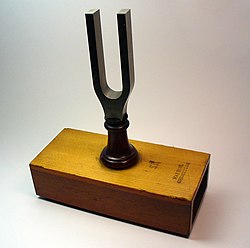 A tuning fork is an acoustic resonator in the form of a two-pronged fork with the prongs (tines) formed from a U-shaped bar of elastic metal (usually steel). It resonates at a specific constant pitch when set vibrating by striking it against a surface or with an object, and emits a pure musical tone after waiting a moment to allow some high overtones to die out. The pitch that a particular tuning fork generates depends on the length and mass of the two prongs. It is frequently used as a standard of pitch to tune musical instruments.

The tuning fork was invented in 1711 by British musician John Shore, Sergeant Trumpeter and Lutenist to the court.[1]

A needle on a tuning fork carves figures on carbon black.

The main reason for using the fork shape is that, unlike many other types of resonators, it produces a very pure tone, with most of the vibrational energy at the fundamental frequency, and little at the overtones (harmonics). The reason for this is that the frequency of the first overtone is about 52/22 = 25/4 = 6¼ times the fundamental (about 2½ octaves above it).[2] By comparison, the first overtone of a vibrating string or metal bar is only one octave above the fundamental. So when the fork is struck, little of the energy goes into the overtone modes; they also die out correspondingly faster, leaving the fundamental. It is easier to tune other instruments with this pure tone.

Another reason for using the fork shape is that, when it vibrates in its principal mode, the handle vibrates up and down as the prongs move apart and together. There is a node (point of no vibration) at the base of each prong. The handle motion is small, allowing the fork to be held by the handle without damping the vibration, but it allows the handle to transmit the vibration to a resonator, which amplifies the sound of the fork.[3] The fork is usually struck, and then the handle is pressed against a wooden box resonator, or a table top. Without the resonator the sound is very faint. The reason for this is that the sound waves produced by each fork prong are 180° out of phase with the other, so at a distance from the fork they interfere and largely cancel each other out. If a sound absorbing sheet is slid in between the prongs of a vibrating fork, reducing the waves reaching the ear from one prong, the volume heard will actually increase, due to a reduction of this cancellation.

Although commercial tuning forks are normally tuned to the correct pitch at the factory, they can be retuned by filing material off the prongs. Filing the ends of the prongs raises the pitch, while filing the inside of the base of the prongs lowers it.

Currently, the most common tuning fork sounds the note of A = 440 Hz, because this is the standard concert pitch, which is used as tuning note by some orchestras, it being the pitch of the violin's second string, the first string of the viola, and an octave above the first string of the cello, all played open. Tuning forks used by orchestras between 1750 and 1820 mostly had a frequency of A = 423.5 Hz, although there were many forks and many slightly different pitches.[4] Standard tuning forks are available that vibrate at all the musical pitches within the central octave of the piano, and other pitches. Well-known manufacturers of tuning forks include Ragg and John Walker, both of Sheffield, England.

The pitch of a tuning fork can vary slightly with weathering and temperature. A change in frequency of one vibration in 21,000 for each °F (86 ppm per °C) change is typical for a steel tuning fork, flattened by heat and sharpened by cold.[5] The standard temperature is now 68 °F (20 °C) but 59 °F (15 °C) is an older standard. The pitches of a musical instrument such as an organ are also subject to variation with temperature change.

The frequency of a tuning fork depends on its dimensions and the material from which it is made:[6]

in the equation above can be rewritten as

if the prongs are cylindrical of radius r, and

if the prongs have rectangular cross-section of width a along the direction of motion. 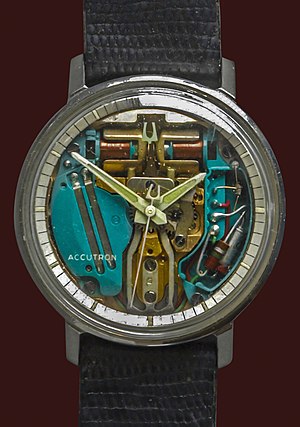 A Bulova Accutron watch from the 1960s, which uses a steel tuning fork (visible in center) vibrating at 360 Hz.

Forks have traditionally been used to tune musical instruments, although electronic tuners are replacing them in many applications. Tuning forks can be driven electrically, by placing electromagnets close to the prongs that are attached to an electronic oscillator circuit, so that their sound does not die out.

A number of keyboard musical instruments using constructions similar to tuning forks have been made, the most popular of them being the Rhodes piano, which has hammers hitting constructions working on the same principle as tuning forks and uses electric amplification of the generated sound. The earlier, unamplified dulcitone used tuning forks directly; it suffered from faintness of volume. 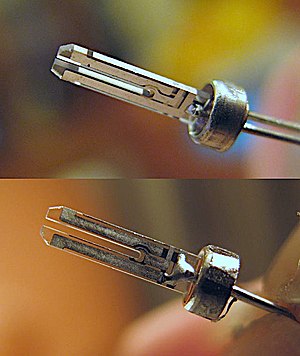 Quartz crystal resonator from a modern quartz watch, formed in the shape of a tuning fork. It vibrates at 32,768 Hz in the ultrasonic range.

In clocks and watches

The quartz crystal that serves as the timekeeping element in modern quartz clocks and watches (right) is in the form of a tiny tuning fork. It usually vibrates at a frequency of 32,768 Hz in the ultrasonic range, above the range of human hearing. It is made to vibrate by small oscillating voltages applied to metal electrodes plated on the surface of the crystal, by an electronic oscillator circuit. Quartz is piezoelectric, so the voltage causes the fork tines to bend rapidly back and forth.

The Accutron (right), an electromechanical watch developed by Max Hetzel and manufactured by Bulova beginning in 1960, used a 360 hertz steel tuning fork as its timekeeper, powered by electromagnets attached to a battery-powered transistor oscillator circuit. The fork allowed it to achieve greater accuracy than conventional balance wheel watches. The humming sound of the tuning fork could be heard when the watch was held to the ear.

An alternative to the usual A440 diatonic scale is that of philosophical or scientific pitch with standard pitch of C512. According to Rayleigh, the scale was used by physicists and acoustic instrument makers.[8] The tuning fork that John Shore gave to Handel gives a pitch of C512.[9]

Tuning forks, usually C512, are used by medical practitioners to assess a patient's hearing. This is most commonly done with two exams called the Weber test and Rinne test, respectively. Lower-pitched ones (usually C128) are also used to check vibration sense as part of the examination of the peripheral nervous system.[10]

A radar gun, typically used for measuring the speed of cars or balls in sports, is usually calibrated with tuning forks.[11][12] Instead of the frequency, these forks are labeled with the calibration speed and radar band (e.g. X-Band or K-Band) for which they are calibrated.

Doubled and H-type of tuning forks are used for tactical-grade Vibrating Structure Gyroscopes like QuapasonTM and different types of MEMS.[13]